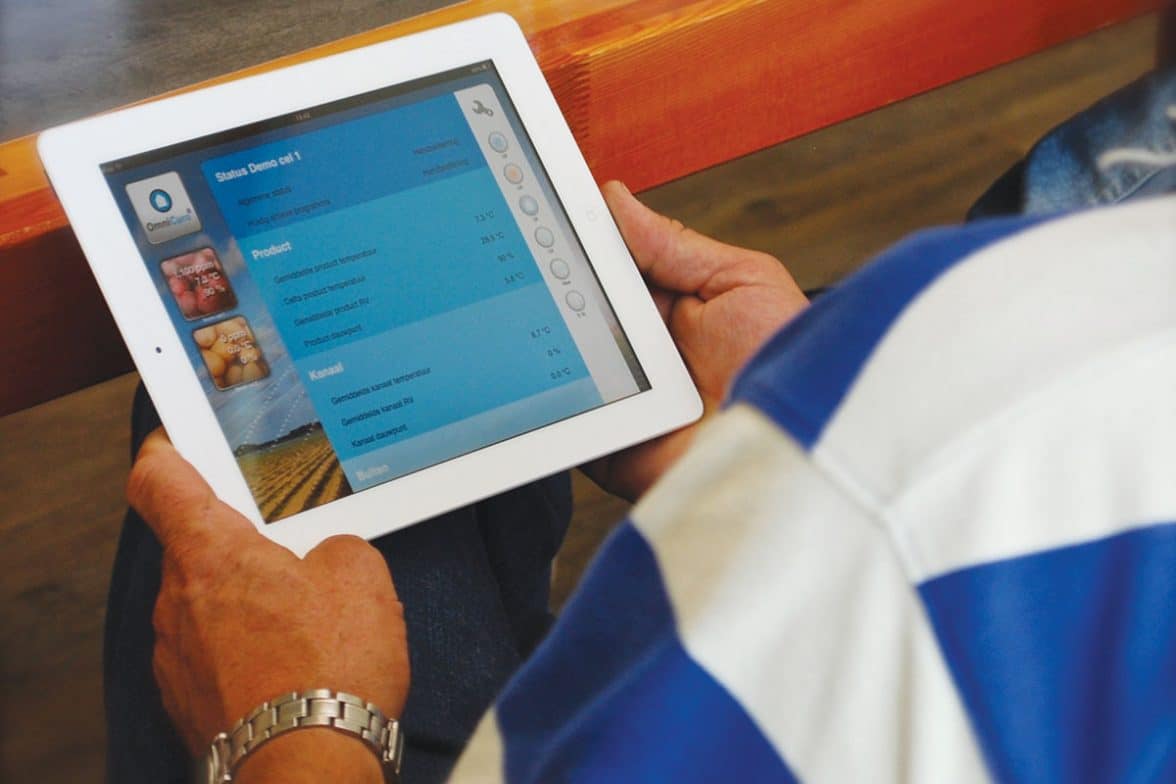 OmniCuro is a storage automation tool from Omnivent that can be used on a tablet or smartphone. PHOTO: OMNIVENT.

To protect their investment, it’s important for growers to keep on top of the latest innovations in ventilation, humidification and spout control when storing their potato crops. Spud Smart talked to some industry experts about new equipment, products and technologies aimed at ensuring storage success.

Ashley Gorman, vice-president of sales at P.E.I.-based Gorman Controls, believes the most important new technologies to hit the scene in recent years have been those that provide growers with increased control of storage ventilation systems from afar.

While Gorman acknowledges that this kind of innovation isn’t entirely new, more and more growers are implementing wireless control systems that utilize smartphones, tablets and computers. “While it cannot replace being in the storage and seeing what is taking place, it has developed into a valuable tool for storage management,” he says.

Looking at your storage from anywhere is a valuable tool, but there is value added when your system can notify you when something has transpired in your storage, Gorman adds. For this reason, Gorman Controls has added a Vision Alert app for Android and iOS-based devices to its Microvent Vision Systems for smartphones and tablets. All features of the notification app are user selectable as well, says Gorman, so the grower is notified on what they feel is important to them.

Like Gorman, Tenney Lamoreaux has seen a lot of progression when it comes to the use of remote control systems in storage facilities. Lamoreaux  manager of the Gellert Company, says the fact that it’s now possible to access critical information related to storage units 24 hours a day is a big benefit for the industry.

“Never before has it been so convenient to know the current condition of your storage,” he says. “What used to take hours of driving every day can now be done with a couple of touches on a smartphone, tablet or computer.”

An additional benefit for growers is added peace of mind. If the ventilation system that is protecting millions of dollars worth of product suddenly shuts off, text messages and email alerts can be immediately sent to the storage manager, Lamoreaux says.

The Agri-Stor control panel, one of the technologically advanced offerings from Gellert that features plug-and-play Internet-ready communications, was recently improved for this purpose. Lamoreaux says the software has been updated and a new application added that shows growers which equipment is running and in what mode.

“These same recognizable icons are found on the new app and allow the user to turn equipment on and off with a single touch,” Lamoreaux says. “No more logging in or changing screens to make changes. [It’s] simple, yet intuitive and full-functioning.”

Lamoreaux notes Gellert is also working on a new bay light monitoring system to reduce the risk of green defect development from lights that are accidentally left on. The system will send a text and email alert to the storage manager when bay lights have been left on longer than they should be.

Huub Kasius, managing director of Dutch firm AgroVent BV, was one of the speakers at the International Potato Processing and Storage Convention which Spud Smart attended in Bucharest, Romania earlier this year.  Kasius spoke about VaccTek, an innovative potato drying system offered by AgroVent that will be available in Canada soon.

According to Kasius, VaccTek utilizes condenser drying and is more efficient than traditional methods, where water-saturated air is blown out of the storage unit after it has dried the potatoes. In the VaccTek system, the storage is kept closed. “Instead we let the damp air pass through a plate, which is cold enough to let the water condense, so it can be purged,” said Kasius.

An AgroVent VaccTek system drying out organic onions under terrible weather conditions at a storage facility in Denmark. Photo: AgroVent.

The condensation of water causes the temperature of the air to drop several degrees, he continued, which is not desirable. “We use some of the heat produced by the compressor/cooling system to heat up a second plate to warm the air in the storage back up to its original temperature,” Kasius added.

According to Kasius, the beauty of this system is that all components — fans, cooling systems, heat exchangers and controls — are integrated into one machine. The technology can be used for drying both onions and potatoes. Kasius said if all goes as planned, VaccTek will be available in Canada in 2016.

Researchers from another Netherlands-based company, Omnivent, are looking at perfecting quality control in storage through an innovative data collection and assessment model that looks at how minute environmental changes can affect crops in storage.

Paul Kok, the company’s chief commercial officer, spoke about the prediction model currently being worked on by Omnivent in a presentation at the International Potato Processing and Storage Convention.

According to Kok, the aim is to incorporate the new tool into Omnivent’s storage control systems to enable growers to make better decisions.

Kok said the time is ripe for this kind of dynamic potato storage model. That’s because there has been much research done on the physiology of the potato in storage, but very little on how such processes as ventilation affect the physiological process of that potato, he explained.

While Omnivent’s research is being conducted primarily in the Netherlands, Kok said it’s expected the model will be able to be applied to storage facilities around the world. Growers would simply need to input local data on a number of variables, such as potato variety, storage conditions and disease pressure.

The project is set to run for four years and is currently in its second year. According to Kok, Omnivent has already implemented preliminary results to make changes to storage design and to advise clients on ventilation options and capacity.

Omnivent has also come up with a way to enhance storage efficiency and reduce heating costs through an innovative building technique called “double roof” construction. According to Kok, the simple yet effective storage roofing system is now widely used in the Netherlands.

“It is able to contribute to better sustainability of the total storage by reducing energy use,” said Kok. “This, in turn, will reduce overall costs.”

John Immaraju, director of commercial product development for AMVAC, was another speaker at the International Potato Processing and Storage Convention. He talked about SmartBlock, a post-harvest sprout inhibitor that burns off peeping sprouts and restores dormancy in potatoes.

Now registered for use in the United States and Canada, SmartBlock can be applied as a stand-alone treatment and also be used in conjunction with other sprout inhibitors.

The active ingredient in SmartBlock is a naturally occurring molecule classified by the U.S. Food and Drug Administration as an approved direct food additive, and by the U.S. Environmental Protection Agency as a biopesticide.  According to Immaraju, the product is the first alternative to CIPC for effective sprout control in potatoes.

SmartBlock from AMVAC is a post-harvest sprout inhibitor that burns off peeping sprouts and restores dormancy in potatoes. Photo: AMVAC.

Immaraju described SmartBlock as a safe, quick and effective product that has impressed commercial potato growers and applicators in the U.S. with its performance.  Applied as a vapour, SmartBlock can be distributed uniformly throughout the potato pile and can be used in all types of storage facilities, he said.

Immaraju noted SmartBlock’s most unique quality may be its ability to rescue tubers by destroying sprouts up to 2.5 centimetres long and restoring tuber dormancy.