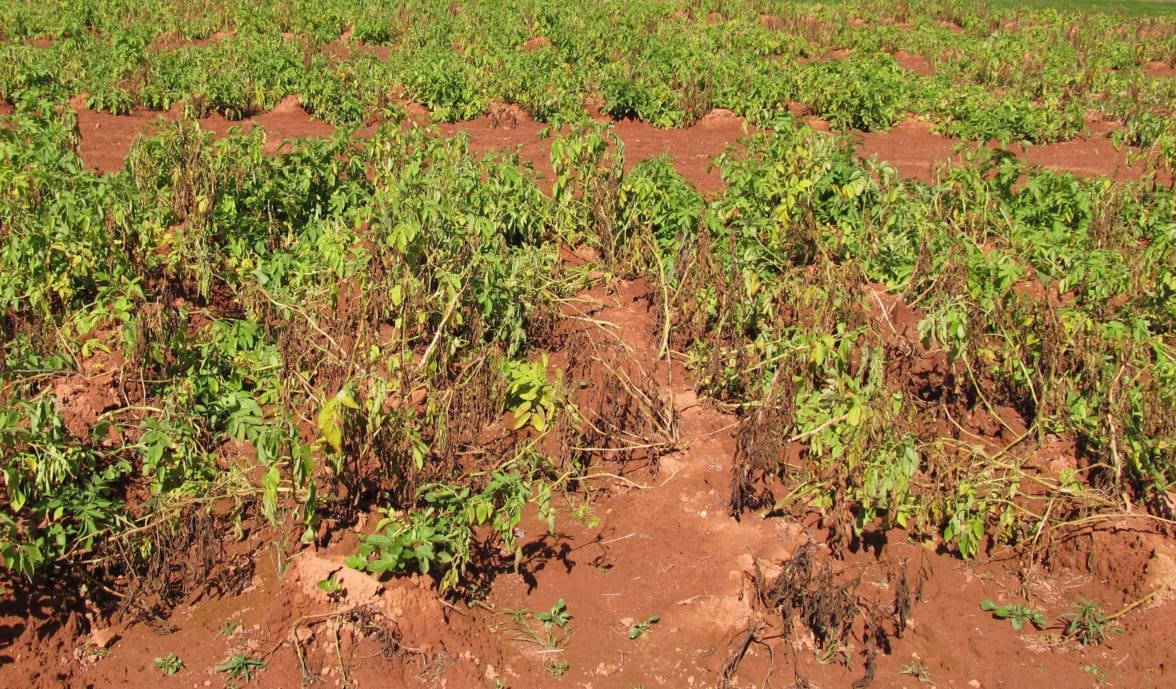 Scientists continue to study the disease. An integrated management approach is still the best option for growers.

POTATO EARLY DYING COMPLEX (PED) is one of the most economically devastating diseases Canadian potato growers face each year, and incidence has been on the rise in fields across the country. With few registered chemicals available, an integrated management approach is the best means of control.

Early dying in potato occurs when potato plants fail to reach full maturity. As its name suggests, early dying is a complex issue due to a combination of factors, including soil, crop conditions, pathogens and pests.

The primary cause of the complex is the soil-borne fungus Verticillium dahliae, which infects potatoes through a plant’s root system, colonizing and clogging the plant’s vascular system causing wilt. While infection can occur when V. dahliae alone is present, wilt may occur even earlier or be more pronounced if damage from a root lesion nematode called Pratylenchus penetrans has occurred.

PED is a devastating disease that has the ability to completely compromise plant health. It can decrease crop quality and lower overall yield, sometimes by as much as 50 per cent, according to the Michigan State University (MSU) Extension Bulletin Potato Early Die Complex. Tudor Borza, a research associate at Dalhousie University, explains further. 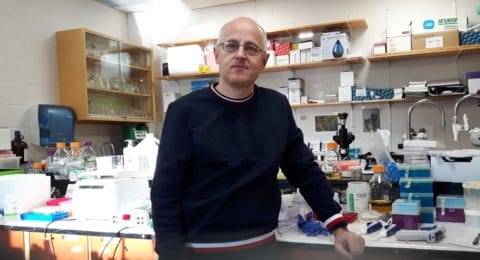 Tudor Borza is a research associate at Dalhousie University.

Symptoms of PED first appear in the form of wilt, says Borza. Infected plants will show signs of decline much earlier than those that reach maturity. The leaves of infected plants – mostly the lower leaves – will show chlorosis, and some stems will yellow and die. Inside the stem, the vascular systems will turn a brownish colour.

According to the MSU bulletin, there are factors that make V. dahliae even more confounding. For one, the pathogen has a wide range of host crops, including bell pepper, tomato, mint and eggplant. Additionally, microsclerotia produced by the fungus can survive in soil and plant debris for up to 10 years, even in harsh winters. It does not, however, thrive in overly wet soil or under high-temperature conditions.

Surviving microsclerotia awaken each spring when stimulated by root secretions. The pathogen easily makes its way into roots that have been damaged by nematodes. Once it has entered the vascular system it causes chlorosis, necrosis and foliar wilt.

It was the fall of 2013 when Borza first got involved with projects related to Verticillium wilt and PED in eastern Canada. Initially, most of the work was carried out in Prince Edward Island and Nova Scotia, while molecular testing was done in the laboratory of Gefu Wang-Pruski, a professor and potato researcher at Dalhousie University.

In a 2018 scientific paper from the European Journal of Plant Pathology, Borza and his colleagues published data on the incidence and abundance of V. dahliae in soil from various agricultural fields in Prince Edward Island. To assess the distribution of V. dahliae in this region, they carried out a survey of the incidence and abundance using real-time quantitative PCR. The researchers investigated 10 fields from the major potato production areas for two successive years. Analysis of more than 200 soil samples revealed V. dahliae has a high incidence in the province with an uneven distribution in the different locations analyzed.

In 2019, in the same journal, Borza and his colleagues published a second paper, this one on the occurrence and abundance of V. dahliae and V. nonalfalfae in agricultural fields in Nova Scotia. They were also assessed using real-time quantitative PCR.

Since 2018, Borza has also been responsible for a New Brunswick-based project on the status of PED and best management practices in the province. The work is carried out in the laboratory of Balakrishnan Prithiviraj, an associate professor at Dalhousie University, and the project’s main collaborator is Khalil Al-Mughrabi, a pathologist for the Potato Development Centre at New Brunswick’s Department of Agriculture, Aquaculture and Fisheries, and an adjunct professor at Dalhousie University.

In New Brunswick, the incidence of disease is also very serious, says Borza.

“Most soil samples and virtually every single potato stem tested before harvest was infected with Verticillium,” says Borza. “This is a serious problem.”

The question, then, is how the infected potatoes are still alive. If it’s not Verticillium alone that causes PED, it has to be something else, says Borza. In order to better understand which other pathogens are involved in PED, Borza and his colleagues began using a molecular technique called amplicon-targeted next generation sequencing. This work began in 2018.

The aim was to better understand problems related to PED, including the effect of crop rotation on the diversity and abundance of the microbiota, including V. dahliae and P. penetrans, as well as the microbiota composition in the soil found in the proximity of healthy and diseased plants. They also wanted to understand the influence of soil fumigation on microbiome diversity.

Amplicon sequencing revealed significant differences in the diversity of microbiota, as well as a large number of pathogenic species — fungi, oomycetes and nematodes — that impact potatoes and other crops. They also found communities of beneficial fungi that act as antagonists to pathogenic fungi, nematodes and insects. More research is needed to better understand the interrelationships between all of these soil communities.

The Western Committee on Plant Diseases, part of the Western Forum on Pest Management, reported the incidence of PED was higher than normal in 2018, and continued to be an endemic issue in many fields.

Fouad Daayf, a University of Manitoba researcher and head of the Plant Sciences Department, admits it’s hard to tell how widespread the pathogen is since surveys have not been done consistently, and sometimes it’s not easily distinguished by non-specialist scouters from other issues like Fusarium.

For the past 20 years, Daayf has had access to a Natural Sciences and Engineering Research Council of Canada Discovery Grant, much of which he has spent on research on potato defence mechanisms against V. dahliae and Phytophthora infestans (late blight), as well as these pathogens’ counter-defence strategies. He’s also looked at the pathogens’ genetic diversity. More recently, he has been focusing mainly on the molecular and biochemical basis of Verticillium pathogenesis in potato.

Daayf’s team discovered the most aggressive strains of V. dahliae activate genes and produce proteins that interfere with the potato’s defensive system. “That tells us that it is more complicated than we actually thought,” he says. “The pathogen enters through the roots, then moves through the vascular system, in a race against the plant’s defence reactions.”

However, it’s not only that, he says. “Now we’re finding that the pathogen has more sophisticated ways to deal with the plant when it tries to defend itself. It sometimes hijacks the defence system of the plant and that involves hormones the plants actually use to coordinate their own defence.”

Finally, he is also studying how plants fine-tune their defences in an attempt to understand why certain varieties of potato — and other crops — are more susceptible to the pathogen than others. This information could be used to breed less susceptible potato varieties.

When cut, potatoes quickly develop a natural protective layer. Daayf wanted to know if they could help the plant roots do this in the soil where pathogens try to enter, so the potato could better defend itself. To do this, the scientists overexpressed one of the genes responsible for tuber suberization. Daayf says it worked in the proof-of-concept phase using Arabidopsis (of the Brassicaceae family) and the study has been published. The results of this concept on potato are also conclusive, but are unpublished as of yet.

Daayf is also using beneficial bacteria and plant extracts to induce resistance that helps fight infection from Verticillium. Working in collaboration with Mario Tenuta, a professor of applied soil ecology at the University of Manitoba, the team has also been trying to find biofumigants that help deal with pathogens in the soil. In particular, Daayf has looked at local plant extracts, like Canada milk vetch and cruciferous species.

“Once you impregnate the tuber as a seed in Canada milk vetch solution and you plant it, it gives some level of protection to the plant later against Verticillium,” said Daayf. “That is done through the activation of certain defences in the plant.”

Led by the now-retired Bernie Zebarth, researchers at the Fredericton Research and Development Centre of Agriculture and Agri-Food Canada (AAFC) have also been experimenting with biofumigants. Experiments were conducted in commercial potato fields in collaboration with McCain Foods.

In a 2017–2018 project cycle, the researchers tested brown mustard. They chose brown mustard because it contains high glucosinolate, and because it is relatively cheaper than the brand mustard variety used for biofumigation. Under enzymatic activity, the glucosinolate is converted into a chemical called isothiocyanate that suppresses pathogens.

AAFC research scientist Dahu Chen joined the Fredericton Research and Development Centre in 2017 and was involved in the biofumigation experiment. He explains the results. 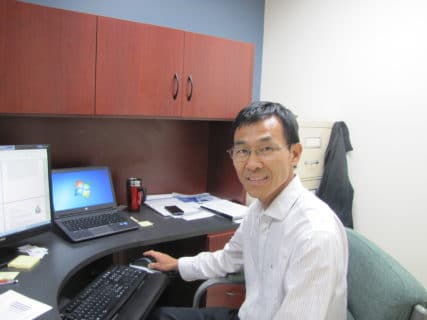 Dahu Chen is an Agriculture and Agri-Food Canada research scientist at the Fredericton Research and Development Centre.

Biofumigants do more than protect crops, though. They also contribute to organic carbon in the soil, which, in turn, improves microbial communities. Chen’s colleagues Louis-Pierre Comeau and Claudia Goyer are looking into the effect of biofumigation on soil health and microbial community.

In a second study initiated in 2019, Chen and his colleagues are evaluating the effect of biofumigation on suppressing diseases and improving potato yield in different commercial fields with high levels of PED to confirm the results obtained in the first project cycle.

“From our results we do see benefits, but biofumigation is not an easy or simple task because the timing for the incorporation of the mustard into the soil was impacted by timing, soil moisture levels — all these things affected the results of biofumigation,” he says. 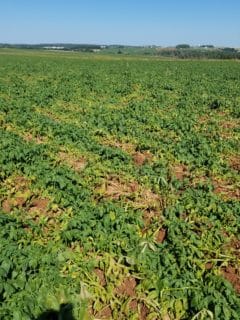 Incidence of potato early dying complex has been on the rise in fields across the country.
PHOTO: DAHU CHEN

The researchers planted two crops in a season, one in early spring and one in the fall. This has been shown to reduce Verticillium pathogen load, as well as the counts of root lesion nematode P. penetrans.

Biofumigants offer other benefits as well, says Chen. In Prince Edward Island, growers use them to suppress disease and to control insects, like wireworm.

“But, of course, the results are not that consistent,” he concluded. “It is affected by many factors, such as the level of glucosinolate of the mustard, incorporation methods and timing, soil types, soil temperature and humidity.”

Varieties have different levels of susceptibility to PED. According to Syngenta Canada, the following have been identified:

There are a few chemicals registered in Canada that claim to control Verticillium, says Borza. Senator PSPT with the active ingredient Thiophanate-methyl is sold in Canada by Engage-Agro. Syngenta offers Aprovia and Elatus. Nematodes, including Pratylenchus, can be controlled by Bayer’s Velum.

“Their efficiency is tested in various places, including by us,” says Borza.

Crop rotation can also be used to prevent disease, however rotation and weed control will not eradicate Verticillium once it is present in fields.