Read the latest editions of Spud Smart on your desktop computer, tablet or mobile device at spudsmart.com. 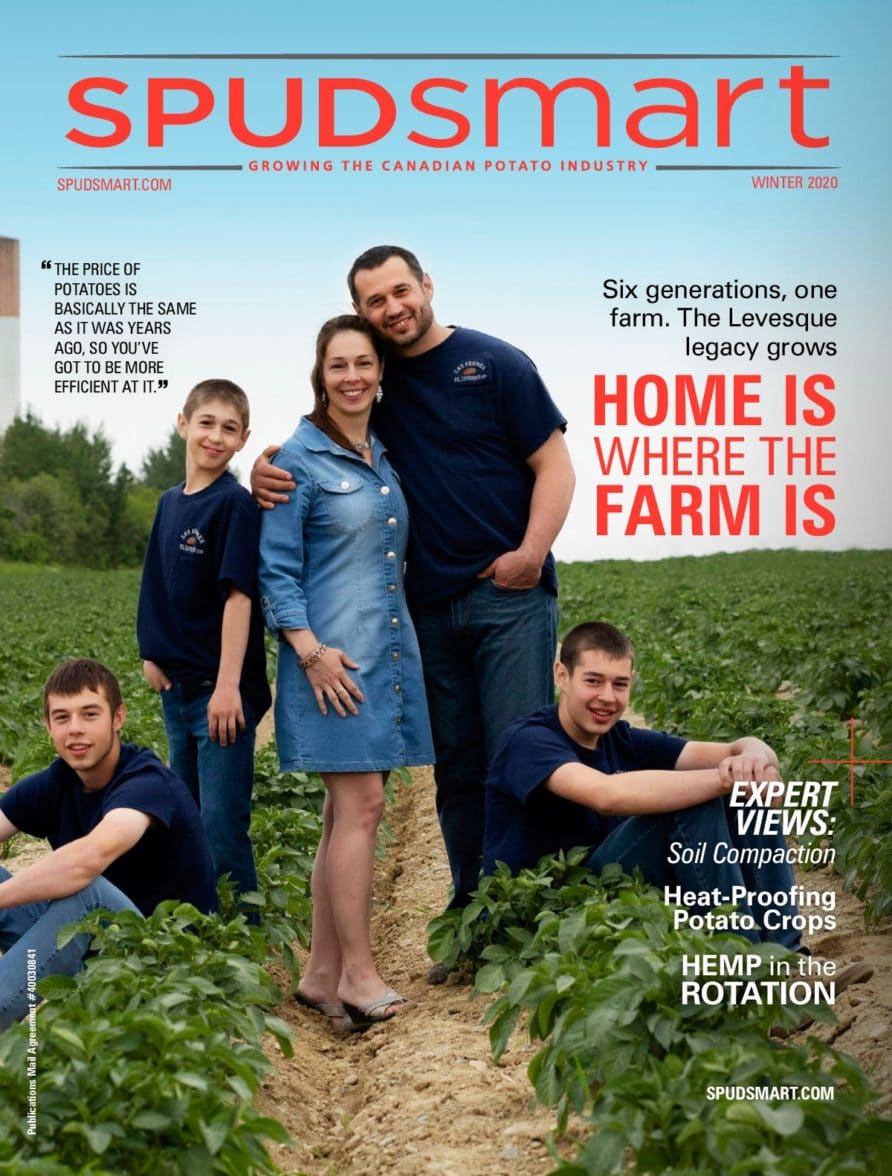 The winter 2020 issue of Spud Smart looks at the suitability of hemp in the rotation, the changes to the AAFC breeding program, nurse crops in potato production and the results from a study on declining potato yields. Also in this issue read about practices for mitigating soil compaction, weed control, potato early dying complex and heat-proofing potato crops, among others. 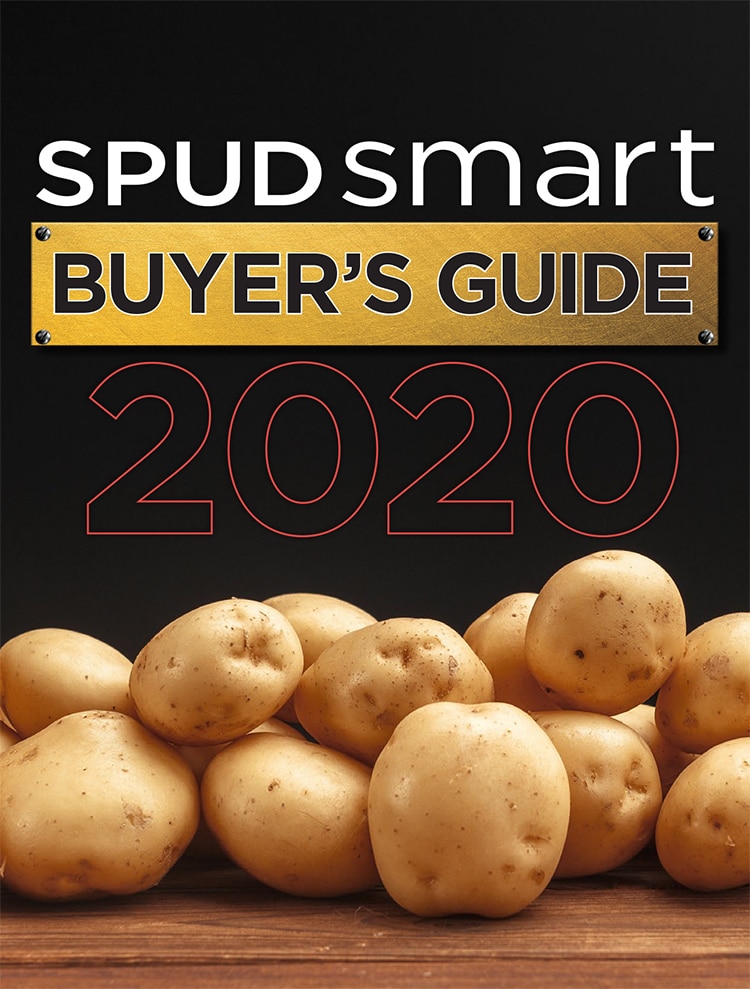 Suppliers to the potato industry have listed their companies in the Spud Smart Buyer’s Guide, where you can search for companies that offer chemicals, equipment, irrigation, crop inputs, potato varieties, services, and more. 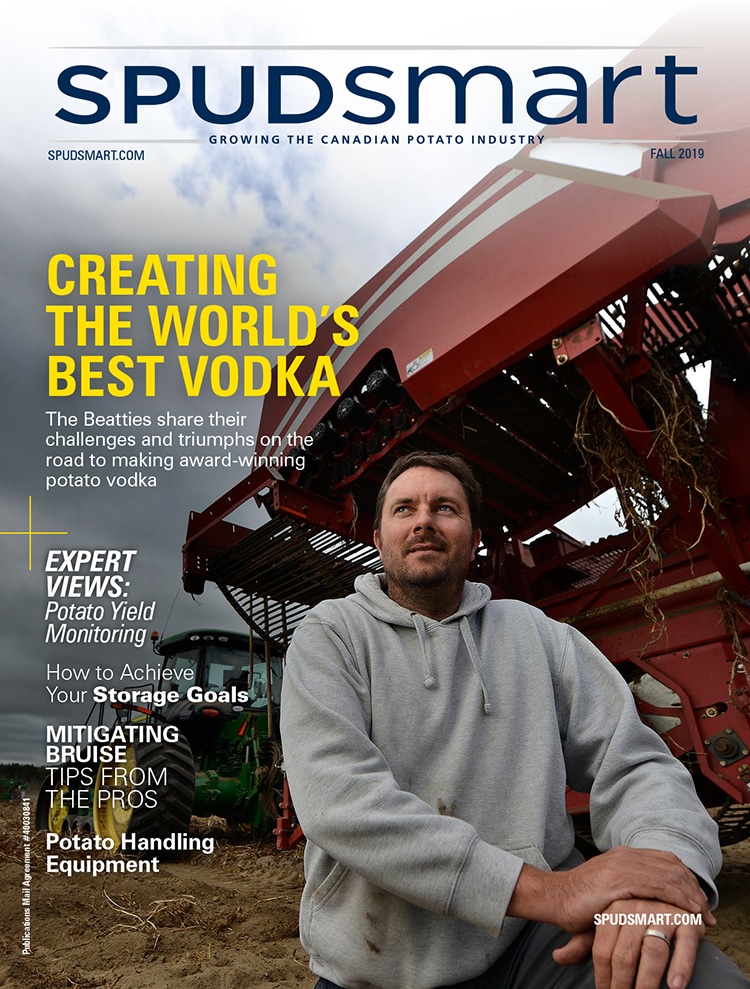 The fall 2019 issue of Spud Smart features advances in potato handling equipment, how to prevent bruising in potatoes, and tips on how to achieve storage success. This issue also spotlights the Beattie family, who decided to try their hand at making potato vodka and ended up creating the world’s best vodka. We also explore what to do when frost hits, the ins and outs of potato yield monitoring, and much more. 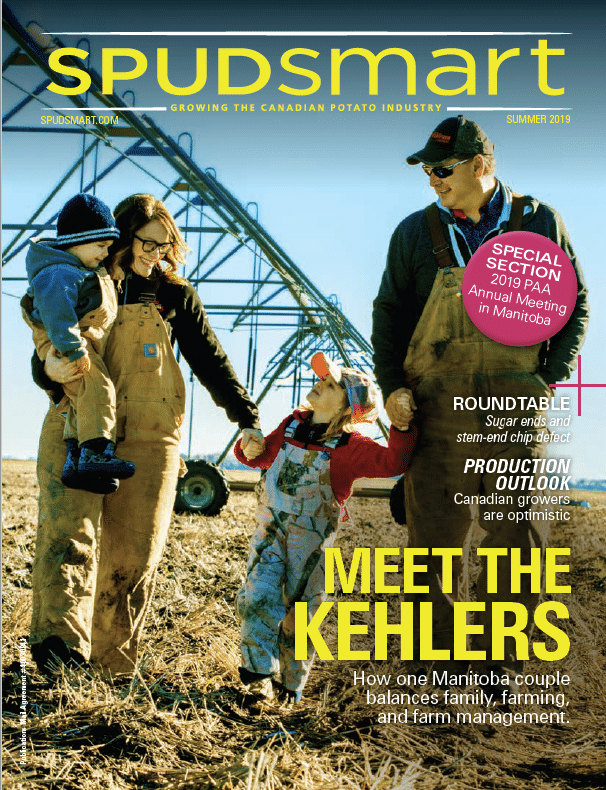 The summer 2019 issue of Spud Smart features the Canadian production outlook, vine killing, sugar end disorder and stem-end chip defect, and how one Manitoba farm family finds balance. This issue also features a section dedicated to the 103rd Potato Association of America Annual Meeting being held in Winnipeg, Man., this summer. In this section you’ll find research growers need to know about, the biographies of those recognized with the PAA’s Honorary Life Membership Award, what’s being presented at the PAA symposium, and much more. 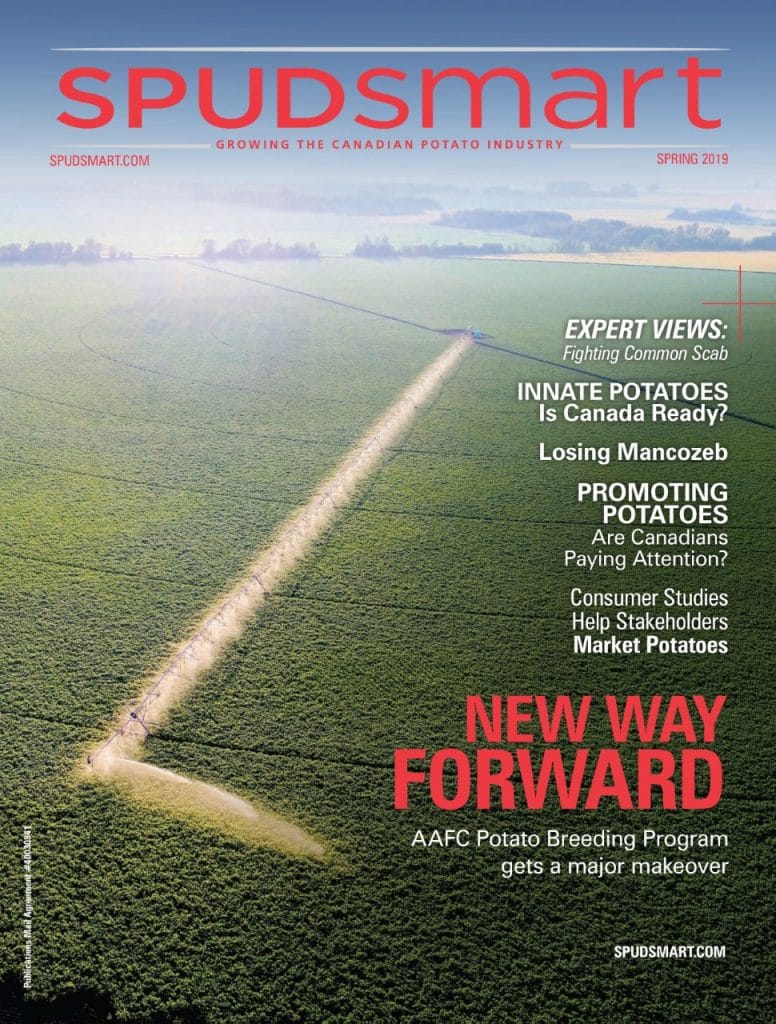 The spring 2019 issue of Spud Smart features the new direction AAFC’s potato breeding program is taking, the repercussions of going without Mancozeb, and the outlook for Innate potatoes in Canada. Also in this issue read about CIP’s new campaign, how to fight common scab on your farm, how consumer studies are helping industry stakeholders market potatoes, and promoting potatoes in Canada, and much more. 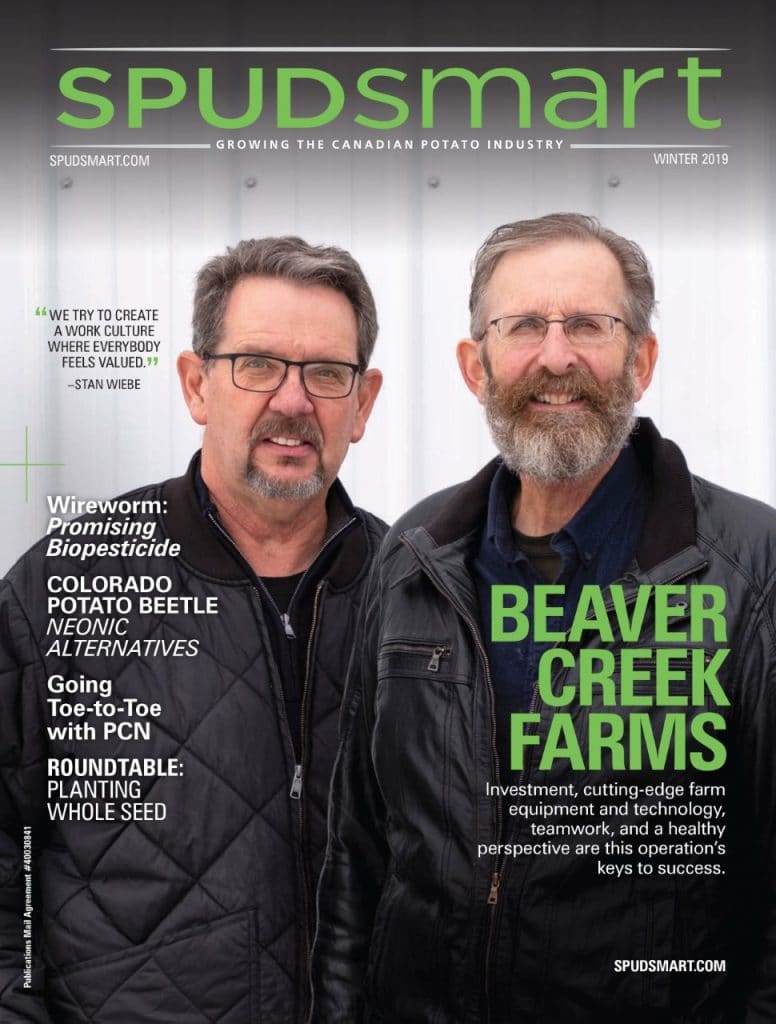 The winter 2019 issue of Spud Smart features new tools for the control of wireworm and Colorado potato beetle. Also in this issue read about the advantages and challenges of planting whole seed, how researchers are advancing the monitoring and management of potato cyst nematode, how potato cultivars affect the common scab pathogen, as well as research on late blight, among others. 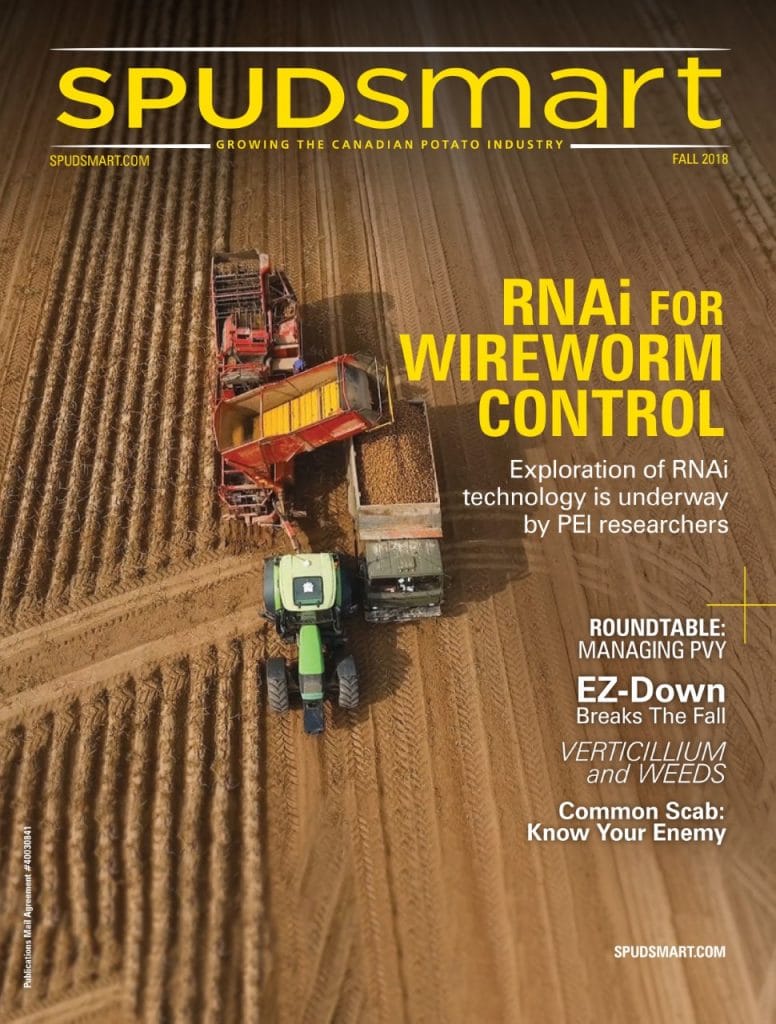 The fall 2018 issue of Spud Smart features the latest research on RNAi technology for wireworm control, common scab species and strains, and verticillium and weeds. Also in this issue read about new and improved potato scanning and handling systems, the new late blight strain US-25, potato breeding in Europe, the EZ-Down for potato handling and how to manage PVY on your farm, among other topics. 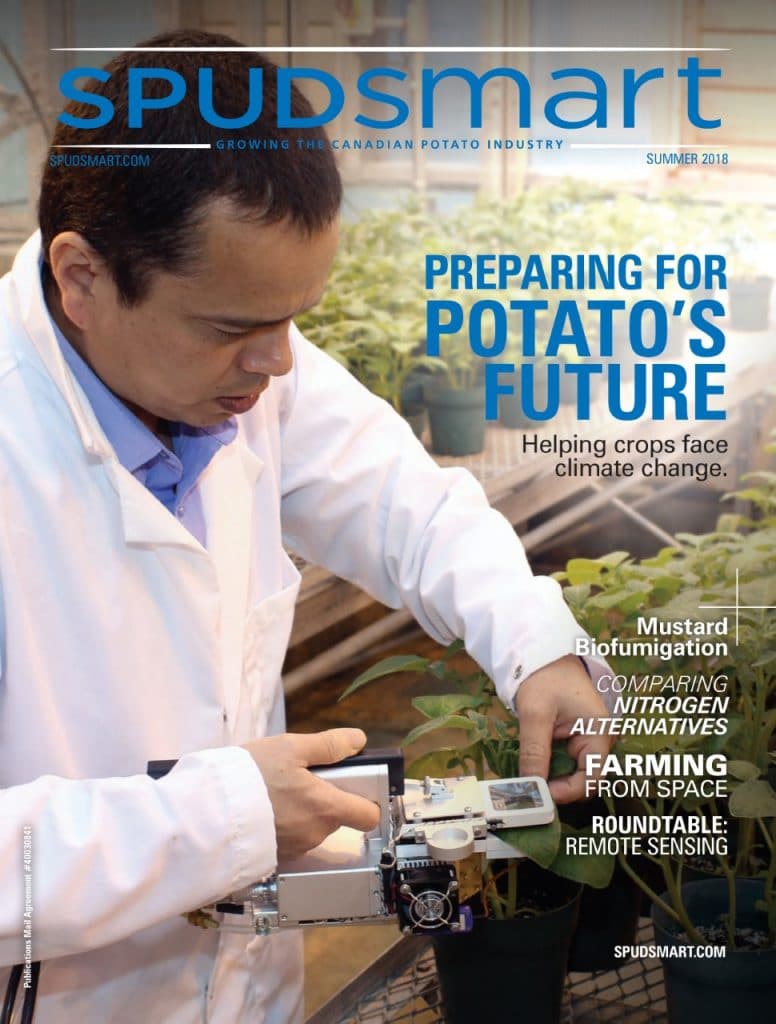 The summer 2018 issue of Spud Smart features the potato production outlook for Canada. Also in this issue, read about adding mustard green manures into the rotation, fighting negative stereotypes about potatoes, remote sensing, breeding varieties for climate change, and much more. 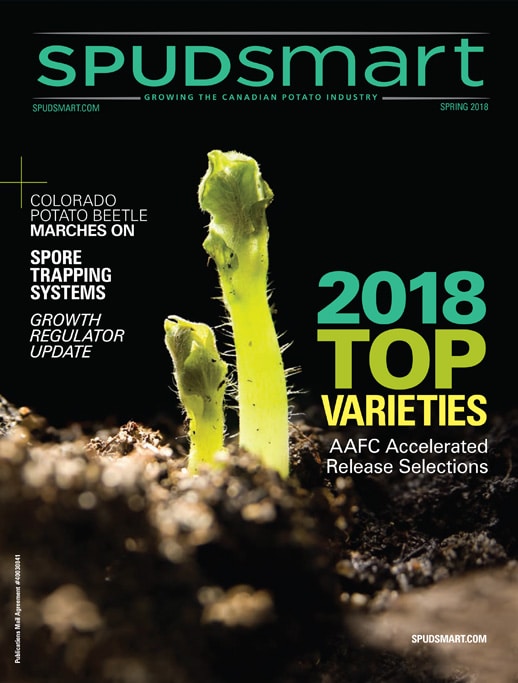 In the spring 2018 issue of Spud Smart, we showcase the 2018 Agriculture and Agri-Food Canada accelerated release varieties. Also in this issue, read about the next level of weed control, Colorado potato beetle management techniques, and the effect of climate change on potato production now and into the future. 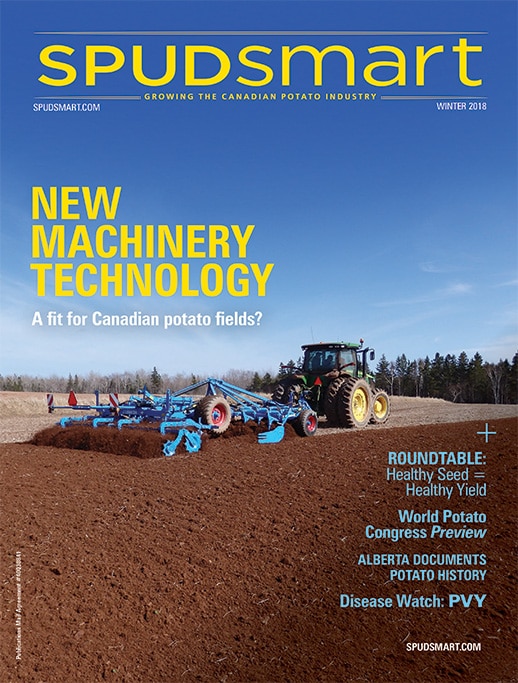 In this issue of Spud Smart, read how researchers are evaluating three of the 4Rs to optimize nitrogen fertilizer management for improved yield, quality and profitability in irrigated potato production.  Also in this issue: World Potato Congress 2018, healthy seed, tackling resistant pink rot, and new potato technology from Agritechnica. 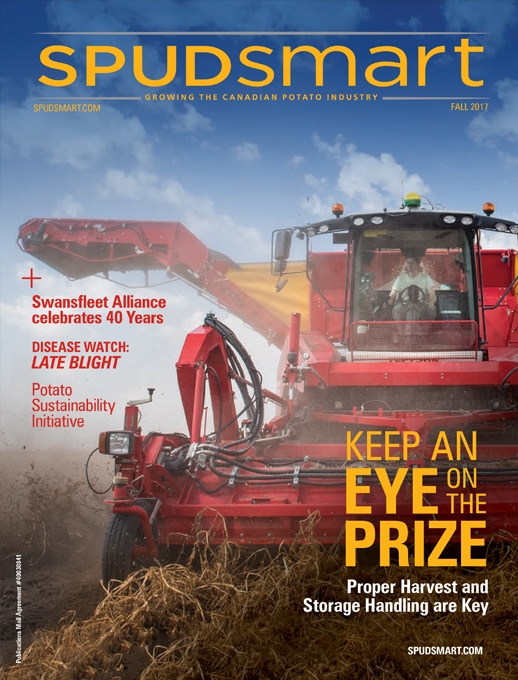 In this issue, learn how companion planting offers hope for wireworm control, and why keeping any eye on harvest and storage handling are key to a successful crop. You’ll also read about how finding the right help at planting and harvest can be a challenge. And, there’s a new way to combat soil erosion – nurse crops. 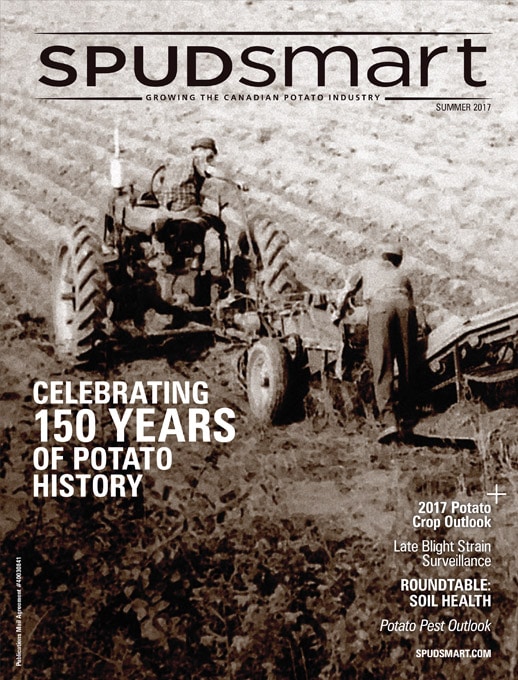 Our summer 2017 issue features several stories related to the production season, including the 2017 production outlook, pests to watch for this season, and soil and water issues. And in honour of the sesquicentennial anniversary of Canadian Confederation, we recognize the role potatoes have played in Canada’s
thriving agriculture sector over many years. All this and more in the summer 2017 issue of Spud Smart. 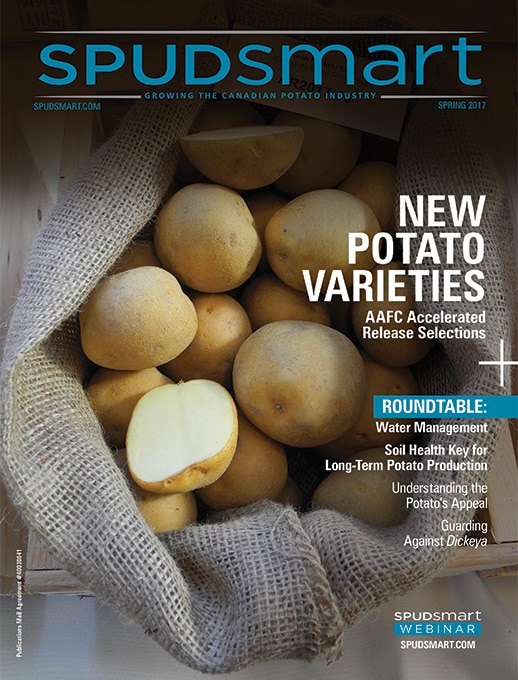 Our spring 2017 issue features several stories related to the planting season, including the importance of soil health, the ins and outs of water management, and introducing Agriculture and Agri-Food Canada’s 2017 new releases. Also, read the latest on how a revised Trans-Pacific Partnership agreement could impact Canadian potato growers. All this and more in the spring 2017 issue of Spud Smart. 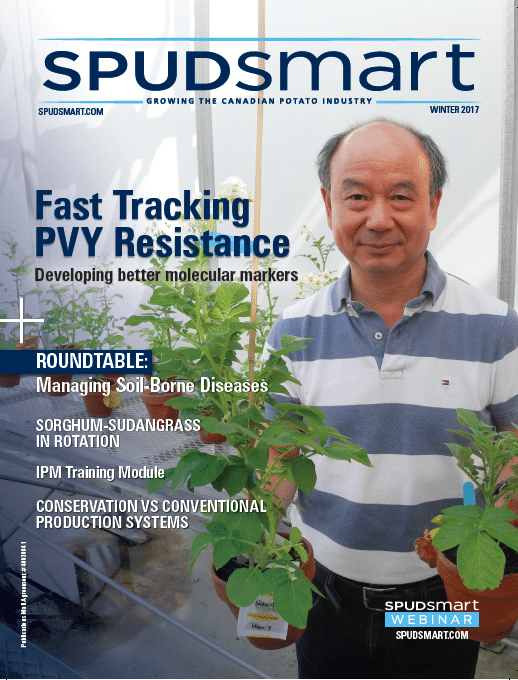 Our Winter 2017 issue features several research-related stories on potato agronomy and breeding, including a story on how researchers are developing new markers for much more efficient selection of PVY-immune potato lines. Also, read about how climate change may change potato production in Canada. And, experts weigh in on best management practices to combat soil-borne pests and diseases. 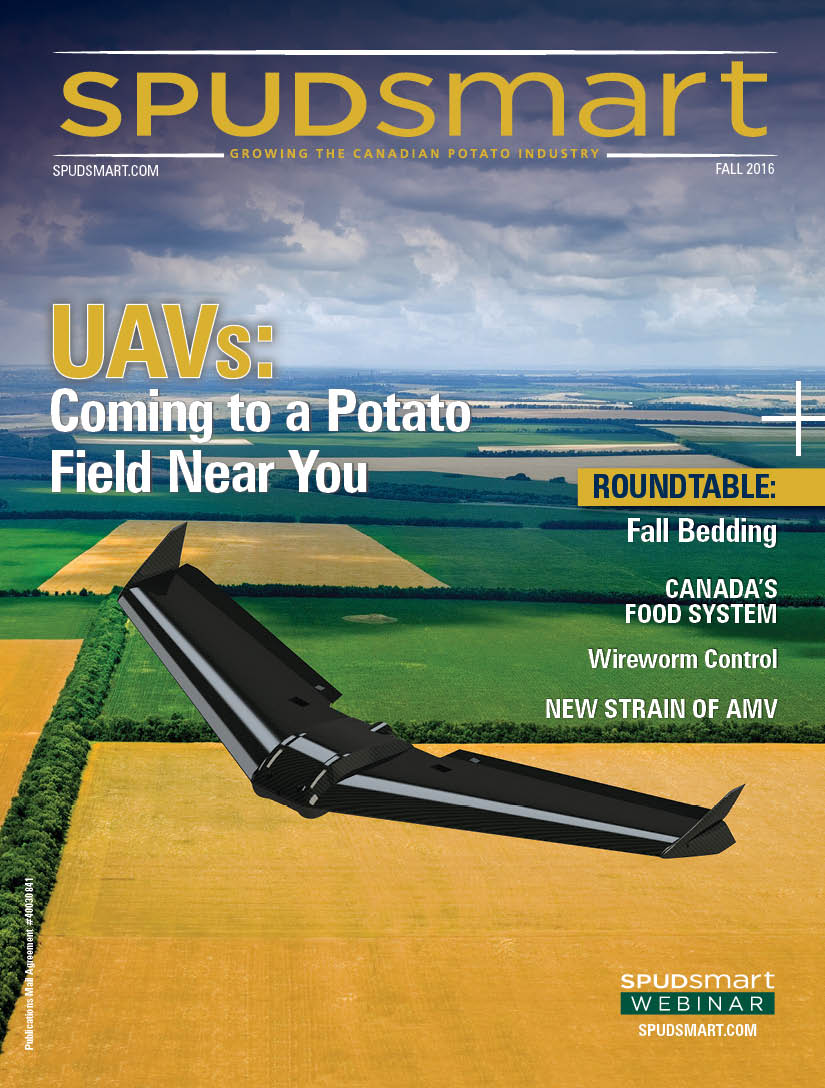 In this issue, learn about a new strain of Alfalfa Mosaic Virus that causes necrosis in tubers. You’ll also read about UAVs and how these ‘eyes in the sky’ are about to fundamentally change how potato farmers see, interact with and manage their crops. And, read all about how two wireworm experts have developed innovative traps that target the adult stage of wireworms, called click beetles. 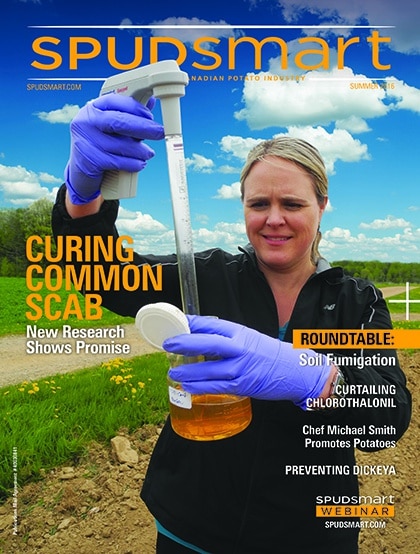 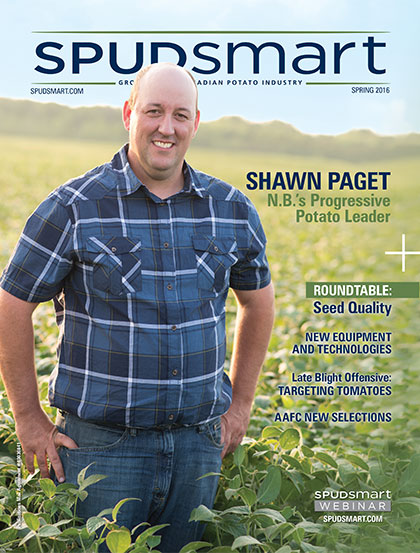 In this issue, learn how a campaign to benefit blight-free resistant tomatoes is benefitting both home gardeners and the potato industry in Prince Edward Island. You’ll also read about new Verticillium research, and get the latest on web-based whole farm solution systems and other new technologies and equipment to help potato producers. 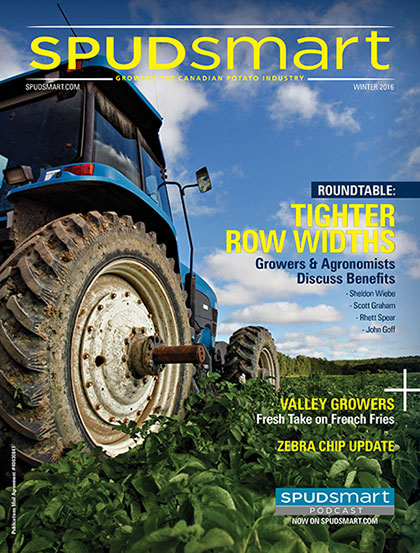 In this issue, hear what growers and agronomists have to say about the benefits of tighter row spacings in potato production.You’ll also get an update on potato psyllids and  zebra chip disease, and learn how Ontario’s Valley Growers has come up with a fresh take on french fries that’s winning awards. 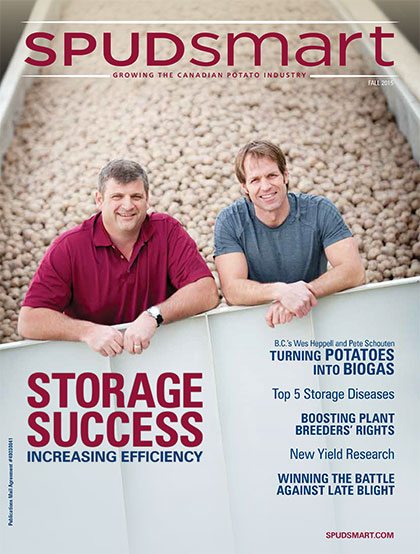 In this issue, you’ll discover a new twist to energy innovation: how some B.C. growers are turning potatoes into renewable natural gas. You’ll also learn about new innovations in storage technology, and get tips from industry experts on best practices for improving potato storage and boosting cost efficiencies. And you’ll want to check out our story on how Alberta growers are winning the battle against late blight disease. 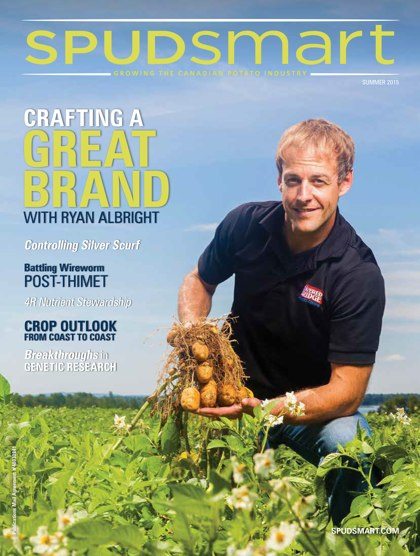 Our feature story in this issue is on Crafting a Great Brand: how a New Brunswick potato chip maker is using its considerable marketing prowess to promote its products as well as food tourism in the local community. You’ll also get the latest on wireworm control, and discover how gene expression research will help growers assess the nutrient needs of their crops. 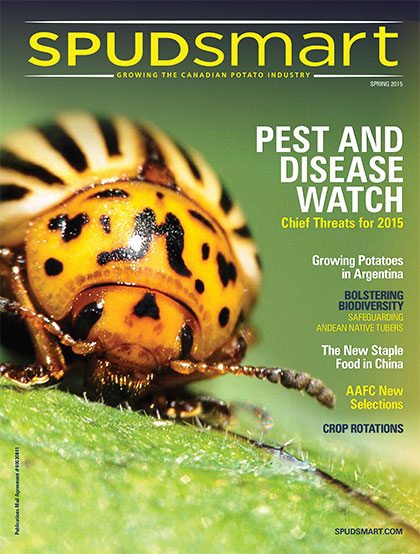 This issues offers up Pest and Disease Watch: what are major threats facing growers at the start of the 2015 season? You’ll also join a group of Canadian and American producers as they discover how potatoes are grown in Argentina. You will also discover how — and why — potatoes are being promoted as a new staple food in China. 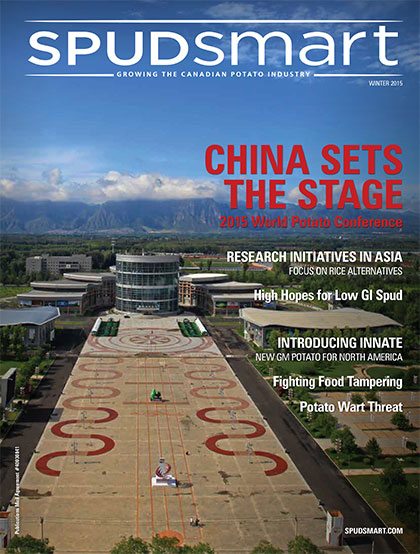 In this issue, get a glimpse behind the scenes as China gears up to host the World Potato Congress. You’ll learn about Innate, the new GM potato developed by J.R. Simplot, and its possible benefits for growers, processors and consumers. Plus, you’ll discover what producers can do to protect themselves and their customers from food tampering. 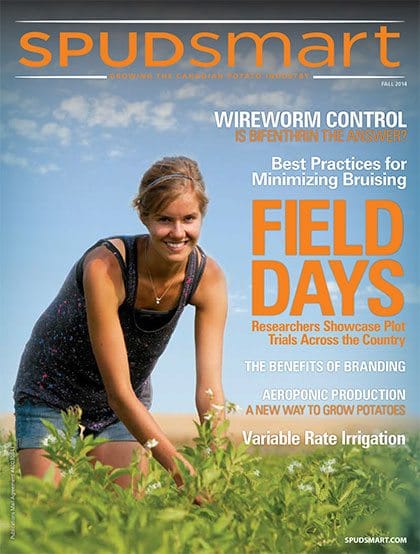 If you’re curious about what the Canadian Potato Museum has to offer, this issue is for you. Plus, with the clock ticking down on Thimet, you’ll get the latest on the illusive silver bullet for wireworm control, and you will also learn about aeroponics — the newest thing in potato seed production. 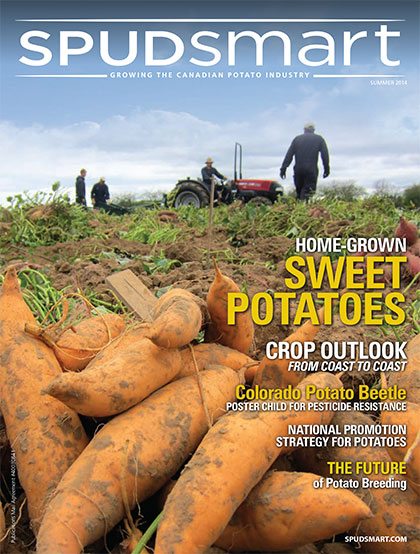 In this issue, you’ll discover why Canada’s private breeders are calling for a larger role in potato R&D. You will also learn how sweet potato growers are overcoming the challenges of the Canadian climate. We’ll tell you why neonicotinoid pesticides are becoming less effective against Colorado potato beetle, and we’ll offer up some tips for growers managing fusarium dry rot. 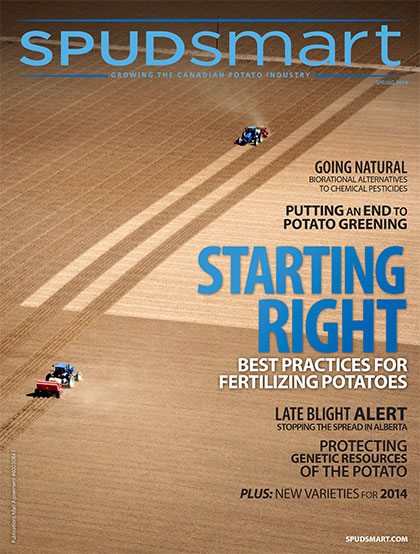 This issue looks at biorational products, a natural alternative to chemical pesticides, and also what’s being done to keep potato mop-top virus from being established in Canada. In addition, you’ll want to check out how a cure may be in the works for sunburned potatoes, and why wild potato species play a crucial role in future food security. 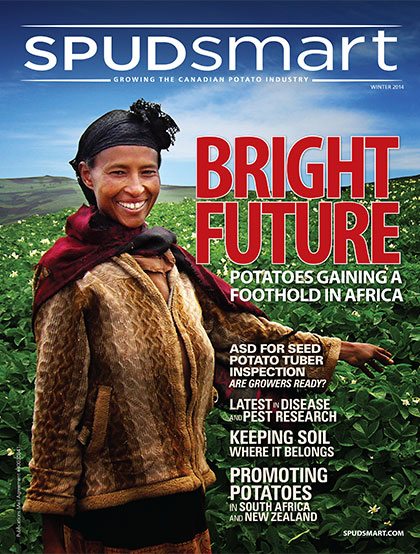 In this issue, you’ll get the latest on pest and disease research going on in Canada, and will also learn about what’s working, and what’s not, in the battle to combat soil erosion in potato fields. You’ll also travel halfway around the world to discover why potatoes are gaining a strong foothold in East Africa.