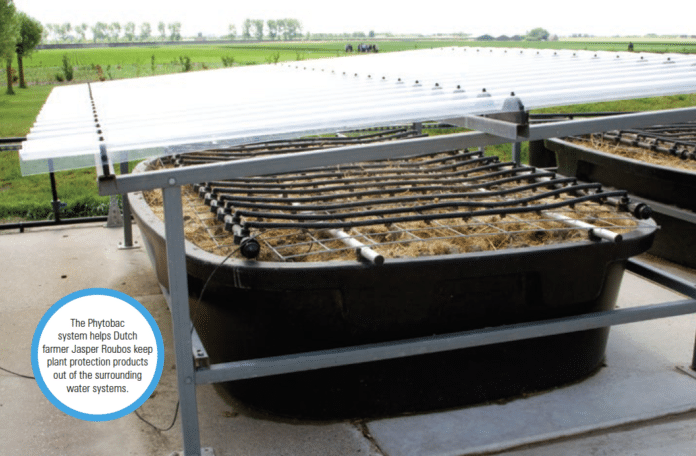 WHEN THE PESTICIDE MANAGEMENT Regulatory Agency (PMRA) announced its proposed special review of clothianidin and thiamethoxam to assess their risks to aquatic invertebrates in November 2016, many in the potato industry were surprised.

And while Canada’s potato producers are already doing a good job in terms of implementing best management practices for off-site pesticide movement, the announcement serves as a reminder the industry must continue to seek out improvements. Formed in the wake of the announcement, a multi-stakeholder neonic group found solutions abroad.

Health Canada is currently consulting Canadians on its proposed special review decision of the neonicotinoid pesticide thiamethoxam following a risk assessment to aquatic invertebrates. According to PMRA, thiamethoxam is currently found in 18 agricultural end-use products, including potato seed piece treatment and in-furrow application.

The special review was initiated on Nov. 23, 2016. At that time, PMRA found data indicating clothianidin and thiamethoxam were being found in a few water monitoring sites at concentrations and frequencies in aquatic environments that could pose a risk to aquatic invertebrates. Based on available information at the time, the agency decided it warranted further assessment.

When Tracy Shinners-Carnelley, vice-president of research and quality at Peak of the Market, a fresh market grower co-operative based in Manitoba, first heard PMRA’s decision on clothianidin and thiamethoxam, she was surprised.

“We know there’s been so much talk about neonics, and a lot of it has been about the potential impact on pollinators. What was a surprise to many people in the industry was when PMRA came out with their proposed decision to cancel because of the impact to aquatic invertebrates,” she says.

Neonics are such a critical pesticide for potato production in Canada, which is perhaps why the announcement really raised the profile of the risk of off-site pesticide movement. Following PMRA’s proposed decision, industry formed a multi-stakeholder neonic team to increase the water monitoring database and propose mitigation strategies in lieu of a ban. The potato industry, in particular, began to evaluate current practices, as well as those that could be put in place to reduce the risk of off-site movement.

One of the international resources the stakeholder group evaluated was TOPPS (Train Operators to Promote Best Management Practices and Sustainability). Launched in the early 2000s, TOPPS is an EU-funded project developed by a multi-stakeholder group with experts from all aspects of the industry.

After best management practices were developed, TOPPS created training manuals used to train advisors and farmers directly. The project doesn’t just aim to develop ubiquitous best management practices — a task that is incredibly difficult, especially given how landscape and circumstances change from country to country — its main objectives are to develop tools for risk diagnosis.

TOPPS has created a manual covering extensive agricultural areas and conditions and offers field source and point source best management practices (http://www.topps-life.org/key-documents3.html). While not all practices can be implemented everywhere, the manual does provide a good starting point for those growers who wish to learn more about how they can minimize environmental impact on their farms.

Luc Bourgeois, technical issues manager at Bayer Crop Science, was very involved in working with industry on risk mitigation strategies. When it comes to land stewardship, there’s no one-size-fits-all strategy, he says.

“It’s really looking at your own farm and looking at areas that lead to potential problems,” says Bourgeois. “What are the points that are vulnerable for potential water contamination?”

In terms of neonic use, Bourgeois says we’re not in a crisis. “We have a few areas in Canada where we’ve had high concentrations of neonics, but we were actually able to pinpoint these sources of high contamination to point source contamination.”

For potatoes, in particular, the location of equipment cleanup could be an issue if it drains into surface water, says Bourgeois. The vast majority of neonic use in potatoes is in-furrow and in seed piece treatment.

Sixth-generation German grain and potato farmer Bernd Olligs understands these concerns well. He has a river running right through the middle of his 115-hectare farm. This worries him because he needs plant protection products to farm, but he doesn’t want them to seep into the groundwater beneath his fields. To address this, Olligs made a sizeable investment in Beutech Agro’s Phytobac.

Phytobac is a biological waste disposal system that ensures residual plant protection protects don’t make their way into groundwater. The concept is regularly showcased on Bayer’s Forward Farms. Olligs’ farm, Damianshof, is one of those farms.

Residual liquids and sprayer wash water containing plant protection products are collected in a buffer tank. From there, the water trickles on demand into a waterproof container filled with a substrate made of soil and straw where the products biologically degrade. The remaining water evaporates through solar heat and ventilation.

The system isn’t cheap. Partially subsidized by Bayer, the system cost 60,000 euros (around C$87,500). To Olligs, the technology is priceless.

On another Bayer Forward Farms in North Holland, Jasper Roubos also uses Phytobac. Like Olligs, he grows winter wheat, onions, potatoes and sugar beets. Roubos’ farm sits five meters below sea level. Seashells dot the clay soil bed on his 80-hectare farm, and canals cut their way in and around his crops.

Roubos protects the surrounding waters through careful plot design, special cultivation techniques and by using the Phytobac system. In the past, he used a single patch of grass, specifically designated for the disposal of wash water from his sprayer. Many times, he felt concentrations were too high, which was especially problematic in rainy weather as bacteria don’t have time to eat at the product.

“Now we have a closed transfer system that addresses the problem,” he says. “I’m very positive about the Phytobac.”

Both Roubos and Olligs have also invested in easyFlow, another closed transfer system that not only protects the environment, but also the user. By continuously adjusting flow rate, easyFlow is a system that enables exact transfer of plant protection products to sprayer tanks. The starter kit includes a tank adapter and up to five container adapters. A newer model enables the transfer of entire contents or exact metering and dosing of small partial quantities.

Bayer is still running tests to see if Phytobac could be a solution for Canadian farmers as well.

“When there’s no Phytobac, growers should simply pay attention where they do clean out the equipment,” says Bourgeois. “They should avoid areas that could quickly leach or with a slope.”

For extra safety, Bourgeois suggests fencing off an area to keep kids and animals out. “But in general, under sunlight and natural degradation, current pesticides will degrade very quickly,” he says.

Another practice Canadian growers have adopted from their European cousins is the micro-dam. Where potatoes are planted in hills and on slopes, soil and plant protection products can pick up speed in channels of water and collect in pools at the bottom. Micro-dams create barriers that prevent water from rushing downhill in rain events, explains Bourgeois. In France, farmers are allowed to use certain chemistries only in fields with micro-dams.

Bourgeois cannot emphasize how important it is farmers continue to have access to chemistries that control pests. But he also stresses the importance of proper stewardship in order to keep those products available to growers.

“Banning is not the solution here,” he says. “Growers will need tools to control pests because as long as the pests are around, we’ll need to control them. What we need to do is to help growers to understand the impact of their current practices, and how they can change these into practices that prevent chemicals from moving into aquatic environments.”