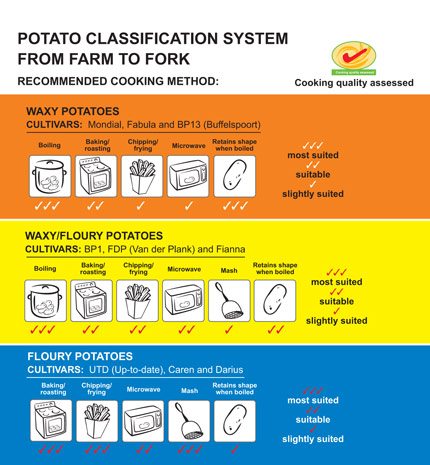 Culinary Classification a Hit with Packers and Growers

In the leaflet, “Factors That Affect Potato Consumption and Purchasing,” published by Nova Scotia Agricultural College’s Potato Consumer Research Initiative it is stated, “Potatoes are losing their grip on Canadian cuisine and being replaced with various food alternatives. One reason may be related to potato marketing strategies which have not kept up with the changing needs of the modern consumer.” Although this statement is somewhat condemning, there is an undeniable truth in this point of view.

Modern Canadian potato consumers fit the typical profile of most consumers in developed Western countries: one that is discerning of information about the food they buy. In view of this, I believe that Canadian potato marketers should focus more on providing sensible on-pack information, suggesting the most appropriate ways of preparing different potato varieties, through cooking, frying, boiling, and so on. Although suggested recipes are now appearing more regularly on potato packs in retail stores, there is room for improvement.

Russet Burbank has long been a favourite variety of North American consumers, and most people are aware of its versatility. But the appearance of several new varieties on the market in the last few years calls for information and guidance for consumers on the specific uses of these varieties during meal preparation. And the most obvious way of doing this is to utilize the space available on potato packs.

Such a system of potato classification—based on the culinary qualities of potato varieties—was successfully developed in South Africa. Hettie Schönfeldt and Nicolette Gibson, from the University of Pretoria’s Faculty of Agricultural and Food Sciences, and Christine Leighton, a sensory food consultant, were charged with the task of coming up with a practical, consumer-oriented classification system based on scientific facts and data by the local potato organization Potatoes South Africa.

“Approximately 40 different potato varieties are produced on a regular basis in South Africa,” says Schönfeldt. “We set out to develop a system to categorize nine of the most popular table varieties. Our final system is based on the textural attributes of these varieties, and the system provides guidance to consumers on the most suitable culinary uses of the varieties during food preparation.”

Schönfeldt notes that changes in consumers’ diets in South Africa, a growing trend toward convenience and an increased demand for detailed food-related information have all contributed to an undeniable need for a potato classification system for culinary usage. “Our classification system aims to ensure that consumers buy products of uniform quality and predictable preparation results every time they decide to buy these potatoes,” she says. “We wanted to create a system by which we can guide consumer choice on the culinary applications of potato varieties with easy-to-understand information right there in clear view on the pack.”

In order to find common quality-related denominators, the researchers screened popular fresh market potatoes typically cultivated in each of several production regions across South Africa. The varieties were assessed by a trained and experienced panel at the Agricultural Research Council’s sensory laboratory. Physical tests, such as hardness when cut with a knife and fracturability in the mouth when chewed, were conducted at the University of Pretoria. The potatoes were also chemically analyzed for attributes such as percentage of starch and dry matter content.

“At the start of the project we launched an investigative study of similar systems in other potato-producing countries,” says research scientist Nicolette Gibson. “After we completed our analysis of the local varieties, we adopted the results to fit within a South African context.”

The research team identified and coined three categories to classify the varieties: waxy, waxy/floury and floury.
• Waxy potatoes have a high moisture content but lower starch percentage. When boiled, these potatoes retain their shape and stay firm. When eaten, they have a pasty texture in the mouth. They are best suited for culinary uses that require the potato to retain its shape; for example, boiled or salad potatoes.
• Waxy/Floury potatoes have a moderate moisture content and average starch percentage. They have a slightly floury feel in the mouth after being cooked. These potatoes can be used for a variety of applications, including boiling, microwaving and baking.
• Floury potatoes have a low moisture content but a high starch content. They have a dry and sometimes crumbly mouthfeel once cooked. These potatoes tend to break up or slough during boiling. They are most suitable for roasting, frying, mashing and baking.

Each category is associated with specific textural characteristics, and cooking methods are suggested for the most successful outcomes of the varieties within a specific category. Varieties are further grouped as most suited, suitable, and slightly suited to certain cooking methods, and each category is colour-coded for easy identification by consumers. Potato farmers and packers will now be able to add concise and accurate information in label form on potato bags.

Reaction to the system has been favourable. “Thus far we’ve had very positive responses from potato farmers and packers after the system was introduced—in particular from packers, who serve the main supermarket chains in South Africa,” says Schönfeldt. She is optimistic that the majority of potato bags sold at retail level will display the information stickers by the end of 2011 because of consumer demand and pressure by industry stakeholders on farmers and packers to comply.

As for the future, Schönfeldt and Gibson would like to see the launch of a market study to gauge consumer reaction and level of satisfaction. They are also interested in analysing other less popular, as well as new, table potato varieties on offer at the retail level.