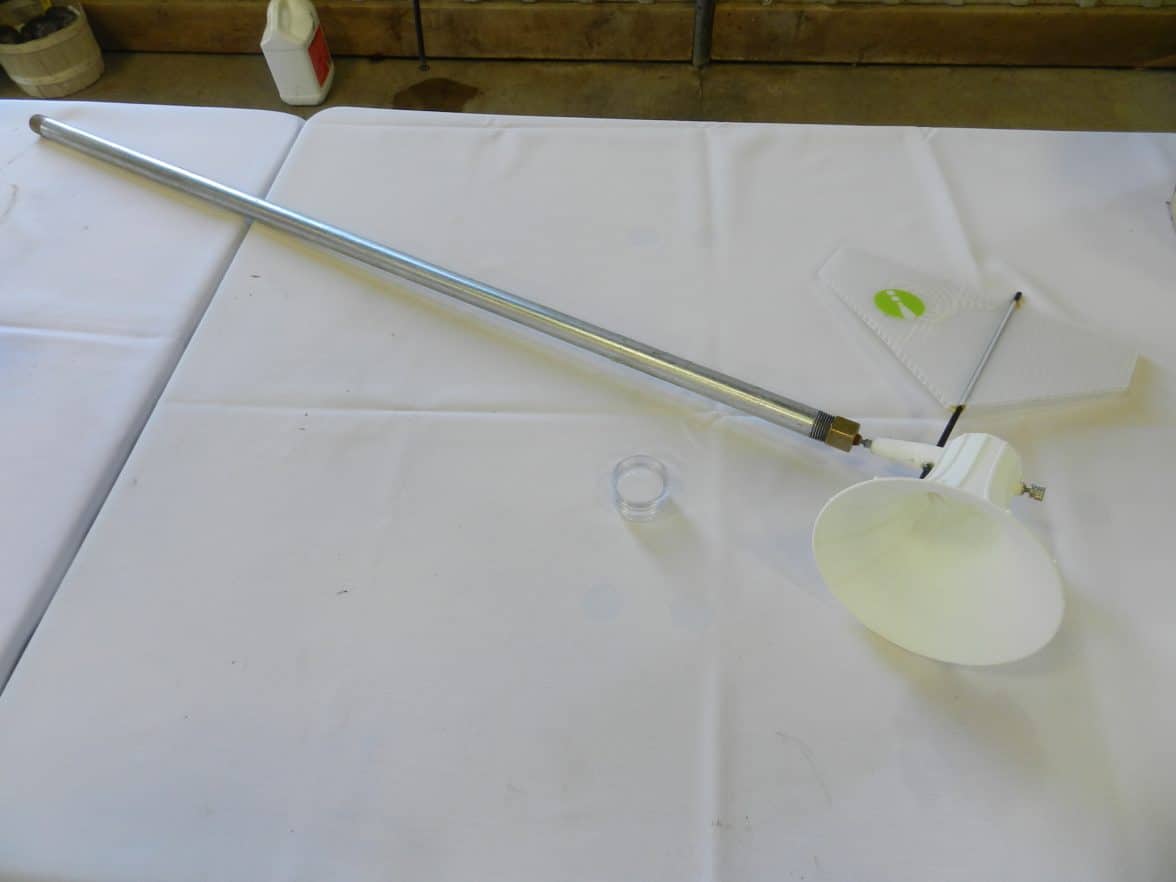 The spore traps were designed to be user-friendly and sturdy. (Photo: Rosalie I. Tennison)

Determining late blight presence and the resulting pressure on potato crops is an ongoing challenge. Usually, potato growers start a preventive fungicide program with broad spectrum fungicides before row closure, which ensures stems and leaves at the base of plants are protected from both early and late blight. If late blight is identified in the field, growers switch to fungicides that specifically target it for enhanced crop protection.

But what if it could be determined in advance if late blight will be a problem? Time and money could be saved.

Ontario’s Eugenia Banks worked with the Ontario Potato Board in 2016 to assess the value of a spore trap that can help growers evaluate late blight incidence in their fields and, in turn, adjust fungicide applications accordingly.

“The spore trap detects the presence of late blight spores in the air before the infection takes place and before symptoms are visible in the field,” Banks says, adding that knowing late blight spores are present helps growers switch to late blight-specific fungicides rather than continued use of broad spectrum products that are less effective in controlling late blight. Spores can spread 100 kilometres (km) on the wind, so capturing them as they are arriving in a field gives growers a head start on planning late blight management.

Eugenia Banks says while the spore traps do not replace scouting, they can provide valuable information on whether to maintain a broad spectrum spray program or switch to a more expensive late blight-specific product. (Photo: Rosalie I. Tennison)

The spore traps were developed by Sporometrics Inc., a Toronto-based company that specializes in research, education, science-based solutions and laboratory testing involving bacteria, fungi and viruses. The traps were designed to be user-friendly and sturdy, says the company’s manager of research and development.

“We want farmers to be able to use these in their fields easily with no special handling required,” says Kristine White of Sporometrics.

In 2016, after hearing about the traps, Banks installed them in two potato fields in two different potato-growing areas in Ontario. The filters or “cassettes” in the traps are made of a material that traps the spores. The cassettes were replaced twice a week and those that were removed were sent to A & L Biologicals in London, Ont., for laboratory analysis. Polymerase chain reaction (PCR)-based tests were used to identify the presence of late blight. The PCR test is very specific, according to Banks, with little risk of false positives.

Meanwhile field scouting and drone monitoring indicated there was no late blight appearing on the plants in the fields where the traps were set.

“These preliminary results indicate that spore traps are invaluable tools to predict the development of potato late blight,” Banks says. “Weather conditions are also important factors that influence the development of this disease.”

Banks adds that while the 2016 growing season was hot and dry, the spore traps detected the late blight pathogen throughout the season.

While it is still recommended growers continue to follow a preventative fungicide spray program for late blight, the spore traps give them valuable information on whether to maintain a broad spectrum spray program or switch to a more expensive late blight-specific product.

“Spore traps do not replace scouting,” Banks says. “Potato fields should still be scouted twice a week. Also, if the seed lot came from an area where there was late blight the previous year, the field should be sprayed at 80 per cent emergence.”

During inclement weather, White says the traps also have a water filter to collect rainwater and any spores that are washed off the cassette.

When conceiving the traps, the company wanted to develop a product that did not require electricity to run. White says the traps were initially created using a 3-D printer and the company ensured the fabric in the cassettes accommodated molecular analysis.

Banks’ research is a Growing Forward project and she intends to complete the same evaluation in 2017 in the same fields and areas with the continuing support of the Ontario Potato Board. The idea of trapping spores seems simple, but, until recently, the technology to easily identify late blight using DNA did not exist. Instead, testing for late blight was done using microscopes, which is time consuming and labour intensive. The spore trap technology has the potential to make tracking late blight easier for growers.

At around $1,000 each, plus $10 for each cassette and the cost of the laboratory analysis, the spore traps may not pop up in every potato field, but that money could easily be recouped if the analysis of the cassette indicates a need to provide more late blight protection for the crop or if lower cost broad spectrum products are sufficient. As most growers know, a heavy late blight infestation can cause many thousands of dollars in losses.

Having another tool to predict late blight presence and its intensity in a field could be a crop saver for growers. The spore trap is a relatively simple, user-friendly device that Sporometrics is already considering tweaking to detect other air borne pathogens of different crops.