By Rosalie I. Tennison 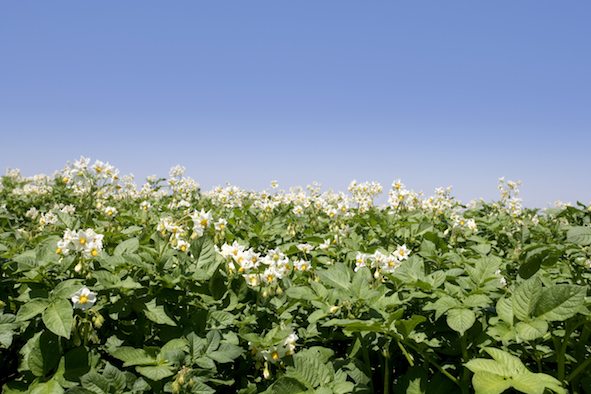 Innovative growers and an agronomist recently teamed up to look at ways to improve the potato crop and the soil.

For three years, Bruce and Hunter Wilson gave agronomist John Lightle the go ahead to try some cover crop combinations on their 6,000 acre farm in the Dufferin Highlands of Ontario. The acres are in a prime potato producing area and the growers wanted to maximize their yield while considering other cropping options to benefit their production goals.

“I saw it as an opportunity to get the Wilsons to try other things other than just relying on fertility to maintain soil balance,” Lightle explains. “At first they were only rotating potatoes with barley, but they had to sell the barley at harvest that they could not store.”

This left the land inactive and prone to wind and soil erosion through winter and early spring. At first, Lightle suggested they switch to a rotation that included winter wheat because it would be planted after the potato crop was harvested, it could be sold at any time and it would be a cover crop that pays. It could also be underseeded with a forage crop that would improve soil health.

The growers purchased a used TerraGator that also had a seed box on it. This allowed them to spread nitrogen in the spring and do the underseeding at the same time. Lightle suggested a combination of clover and alfalfa to give both fibrous and tap root systems.

Lightle says: “Good nutrient levels will support cover crops and we ended up with good results.”

For the initial year, they only tried the combination on 600 acres and only 200 acres of barley, but in the second year, the acreage was increased to 900 acres of winter wheat and half of barley. In the third year, underseeding with a cover crop was done on all the cereal crop acres.

Lightle says the combination of wheat following potatoes underseeded to clover and alfalfa worked wonders on the soil’s health. The farm was able to reduce the acres seeded to potatoes and yet got the same total production.

“We used Buctril M on the underseeded grain, which is less expensive, and we found the underseeding helped weed control through competition,” Lightle explains. “There was concern on how [Buctril M] would affect the alfalfa, but we saw little harm.”

He adds there was some damage to the alfalfa, but after the wheat came off, getting about 75-plus bu/ac, the alfalfa recovered and put down foot-long tap roots by October.

“By using red clover/alfalfa versus rye as a cover crop, we saved the seeding pass of the rye and two tillage passes in the spring.”

Hunter Wilson agrees. “We saw improvements in the crop and the soil. The soil stayed soft all summer and the skins of the potatoes were better. The skin was much cleaner and nicer.” He adds that yields improved by 10 to 20 cwt in the fields that included the clover combination.

“Within one year of making this cropping change, we saw a difference in our soil health,” Wilson says. “We tried other rotations, including corn underseeded to clover prior to potatoes, but the timing had to be perfect.” They learned that winter wheat underseeded to clover followed by potatoes had the biggest benefit in terms of yield, timing of operation and reduction of passes across the field.

Lightle says time and money were saved by using a less expensive herbicide and by seeding the clover combination during a fertilizer application. There was also a nitrogen benefit from the cover crop that Lightle estimates saved about $20 to $30 per acre.

“We saw many improvements,” Lightle continues. “Water management was easier and we were able to move towards a three-year rotation on some land by leaving the forage crop for a year before going back into potatoes.”

He explains the first cut of the forage was sometimes traded to another farmer for manure that was used to improve fertility and tilth on other fields. By taking the field out of potato production for one more year, the soil continued to improve, and yet the farm’s overall potato yield remained constant with fewer acres in potato production.

“Of course you are still at the mercy of the weather,” Lightle admits. “But by the third year we were getting about 290 cwt because the fields were improved with organic material and the moisture was being held in the soil more efficiently.”

Lightle explains that he began working in the area in 1988 and he understood the soil type and the requirements to grow potatoes successfully. He believes this rotation could work in any potato growing area as long the grower knows the soil profile and understands the potential risks so adjustments can be made. He adds the change was made gradually to minimize losses if the idea didn’t work, but in subsequent years they were able to improve the system as they learned.

“It would be helpful to have scientific data to prove how it works,” says Wilson. “Within one year of underseeding clover, we saw a difference in the soil and the quality of the potatoes.” He believes a properly conducted research project would prove the value of a potato-winter wheat rotation when the wheat is underseeded with a forage crop.

Plans were underway to continue the process in the fourth year to see if further improvements could be initiated, but the Wilsons took an opportunity to sell the land and Lightle made a career change to work for a local crop inputs dealer. But all of them agree the system was working and that another year would likely have seen greater progress in soil and crop health.

Canadian Potato Acreage to Drop by 2.3 Per Cent: UPGC

Timing Can Be Everything

Top of the Hill