From general tips to variety-specific recommendations, these experts deliver the goods on mitigating bruise.

Meeting the demands of processors and buyers in terms of quality is a constant challenge for producers. Potatoes that don’t meet quality specs are either reduced in price or get rejected entirely. All through the production process, there are steps growers can take to assure the highest level of quality is maintained, particularly when it comes to mitigating bruise.

There are three types of bruising that occur in potato tubers. Shatter bruise and blackspot bruise are associated with harvest, although bruise can occur anytime they are handled. A third type of bruise, pressure bruise, occurs in storage.

Shatter bruise is visible to the naked eye. Tissue separation and periderm damage occurs when potatoes are harvested and handled when pulp temperatures are too cold. Visually, shatter bruise appears as cracks and fissures in the skin. 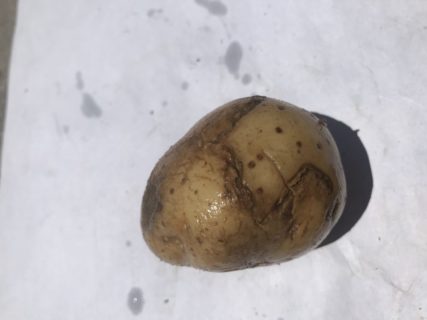 Crisp, turgid potatoes or potatoes with high-solid content rebound when hit with a physical blow. As force reverberates through the potato tuber tissue is actually torn apart. The result is cracks and fissures.

Blackspot bruise is not visible to the naked eye, but occurs beneath the skin’s surface. In this case, the outer skin and the tissue beneath it deform in response to a blow, but the skin doesn’t break and tissue remains intact. Instead, the blow damages internal cells where enzymes and substrates react to create discoloration. Blackspot bruise tends to occur at warmer pulp temperatures or during dry conditions.

Similar to blackspot, pressure bruise damages tissue inside the tuber, leading to discoloration within. In this case, bruise is the result of the weight of the potato pile, which bears down on the potatoes at the bottom of the pile. Externally, potatoes appear flattened.

High levels of calcium in the tuber reduce the risk of bruising at harvest and during transportation, as calcium is important for cell wall structure, says McMillan. Calcium uptake varies from variety to variety; using calcium nitrate rather than ammonium nitrate minimizes bruising damage, and in some varieties, damage can be halved. 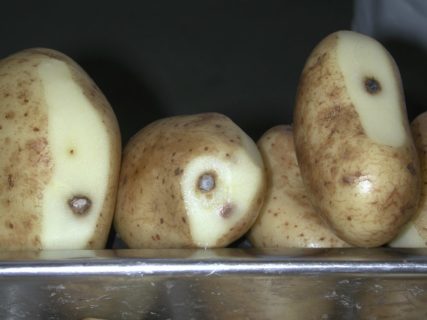 Low potassium levels can lead to issues with quality, hollow heart and bruising. If potassium is under 10 per cent in the first tissue sample, it needs to be addressed immediately, says McMillan.

While mitigating bruise is a season-long process, the most vulnerable time for the potato is harvest, explains Peter VanderZaag, co-owner of Sunrise Potato in Ontario. Management begins with proper adjustment and operation of harvesting equipment and placement of padding in problem areas of the handling equipment. Avoid drops of more than six inches. The recommended pulp temperature range for harvesting tubers for storage is between 7 and 20 C.

However, the temperature range for harvest can be narrower for some varieties, warns VanderZaag. The new Frito-Lay varieties, for example, are very sensitive to bruising, in part because they have higher dry matter, he says. For higher dry matter potatoes, the safe harvest window is 18 to 12 C.

Soil moisture at harvest also contributes to bruise. In Western Canada, growers can easily irrigate when rainfall is scarce, but in the eastern parts of the country, soil is oftentimes too wet or too dry come harvest. Harvesting in soil that is both too wet and too dry can lead to bruising.

“What we’ve done to overcome this, really, is to double up on equipment, so when the days are right, we can harvest twice as fast as before and then we work fewer days,” says VanderZaag. “When conditions are not right, then you take the day off.” 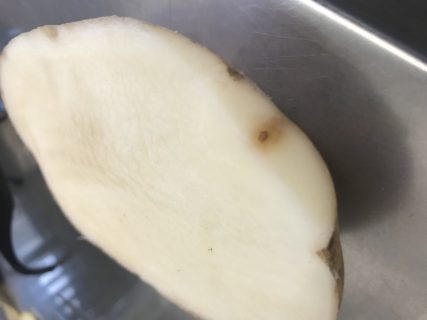 Time of vine kill can also play an important role in bruising. Some varieties require as much as three weeks of vine kill before you can harvest.

Skin set is also important, but difficult to manage in wet or dry conditions.

At harvest, equipment needs to be well maintained and operated correctly. Conveyors should be filled to capacity to keep potatoes from striking chain links, and ensure the harvester is operating at full capacity. If the conveyor is under-loaded, slow its speed to synchronize it with the other conveyors. Minimize movement and drop heights, and cushion impact points. Train staff on the importance of minimizing bruise through careful handling.

To mitigate bruise, one must first know where bruise occurs, says Patrick Morris, sales and marketing director at Techmark Inc.

Techmark offers a solution for detecting problematic transition points in the handling system. The company’s Impact Recording Device (IRD) is a small, globe-shaped device that goes through the handling system exactly as a potato would. Inside, an accelerometer measures impact force and duration.

Not all impact is created equal, explains Morris, as different surfaces absorb different amounts of energy.

“It’s not just the impact that your crop experiences, it’s how it experiences it and over what time,” he explains.

Once the device has gone through the system, the data is presented in the form of a graph that shows a visual representation of the impact points along the handling system. Growers can set thresholds. Thresholds are based on research that shows what a potato can take before it expresses bruise.

“All points above the threshold are points of impact that have the potential to cause bruising in the final product,” says Morris. “Points below the threshold line are points the producer doesn’t need to focus in on.”

For best results, Morris suggests that producers run the IRD through the system several times.

The IRD helped uncover problems for one grower in Michigan who was getting high levels of bruise in a newer field with a lot of rocks. He knew rocks were causing the bruise, but he didn’t know where it was occurring during transfer.

In this case, the IRD revealed that the drops on the conveyor were too high. But the problem wasn’t just potatoes dropping on potatoes. Rocks were dropping on them as well, and the damage incurred was setting them up for challenges in storage. The information collected by the IRD was used not only to make changes in the transfer system, but also to support managers in their training of workers.

“You’re never going to get rid of 100 per cent of touches on your potato because you have to handle them,” says Morris. “You’re trying to get rid of the worst of them to bring your bruise percentage down so that with the final product, the chip expresses less bruising in it.” 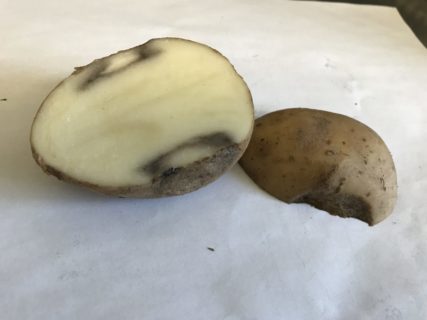 Pressure bruise in storage is also a big issue for growers. Bruised potatoes become a gateway for pathogens and other storage issues.

The key to good storage is high humidity and careful temperature management, says VanderZaag. Temperature spread between intake air and the temperature of the pile has to be as narrow as possible. In conditions where intake fresh temperatures are much lower than the pile, moisture will get sucked out of the potato, as colder air holds less moisture.

“We’re shipping potatoes right now in June that were harvested last year in September,” says VanderZaag. “They’ve been sitting in storage for nine months, but they’re coming out as if they were harvested yesterday. And that’s all about storage technology and storage management that makes that possible.”

“We’re shipping potatoes right now in June that were harvested last year in September. They’ve been sitting in storage for nine months, but they’re coming out as if they were harvested yesterday. And that’s all…
Click To Tweet

While these suggestions provide a good start, today’s potato farmer must also consider variety-specific management techniques. To maintain the highest level of quality in storage, stringent management is required from variety to variety, says Mark VanOostrum, WD Potato Limited agronomist and supply manager, whose expertise is in chipping potato varieties.

Field fry potatoes are susceptible to some types of bruise, but not pressure bruise, since they go direct from field to fryer. The Atlantic variety, for example, is susceptible to white knot bruise, which VanOostrum says can be mitigated by harvesting in temperatures warmer than 12 C.

“Check fields prior to harvest, and leave lower solids fields for later in the fall,” says VanOostrum. “Harvest when soils and frost can occur.”

Andover is more susceptible to bruise and should be harvested in colder temperatures.

Dakota Pearl has good tolerance to blackspot and mechanical bruise due to lower solids, a tougher skin and genetic tolerance. The variety works well in heavy textured soil and fields with stones. It should be harvested in colder temperatures.

Lamoka has thin skin, so it’s susceptible to pressure bruise, says VanOostrum. Allow three to four weeks post-vine kill for harvest, and try to assist as much natural senescence as possible, he says. Consider planting early in a variety mix in lower fertility fields, and harvest later in the season when pulp temperatures are closer to curing temperatures of 12 to13 C.

“Lamoka’s smooth round to oblong shape makes them flow nicely, and not particularly susceptible to blackspot or white knot,” he adds.

Typically, Dakota Pearl is harvested early in the season when warmer temperatures occur. This makes them susceptible to pressure bruise, since extended fan time is needed to cool them. VanOostrum suggests adding refrigeration and shipping early in the storage window (before the end of January) to reduce potential processing problems. He says they are very good on mechanical and blackspot bruise, and can be grown in cloddy, stony fields and harvested later in cooler temperatures.

Waneta is a low solid, good skin, round potato that makes for a good candidate in heavy texture, stony fields and cooler pulp temperatures. It has good bruise tolerance, and tolerance to very cold pulp temperatures of less than 10 C, similar to Dakota Pearl, but significantly better than all other commercial chip varieties.

Marcy is susceptible to blackspot bruise and pressure bruise, says VanOostrum. To mitigate bruise, ensure pulp temperature is greater than 12 C at harvest, and that there’s lots of humidity in storage. Marcy is best stored at temperatures around 9 C.

“There are a lot of propriety chip varieties grown and most have high solids, so bruise management is top priority to growers,” VanOostrum adds. “Outside of chipping, I would say the gold standard for commercial bruise tolerance, cold harvest tolerance and long storage tolerance to pressure bruise would be Russet Burbank.”

“There are a lot of propriety chip varieties grown and most have high solids, so bruise management is top priority to growers.” — Mark VanOostrum
Click To Tweet