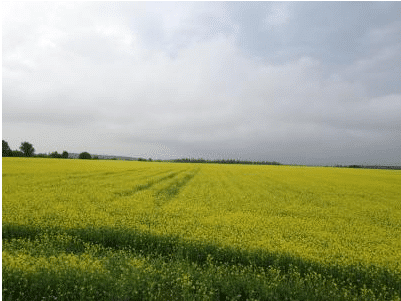 An area of increased attention for agricultural research and changes in production practices globally is soil health. Through new technology and a better understanding of the microbial communities in soil, farmers are making changes in crop rotation, tillage, and nutrient management to foster the health of their soil.

Prince Edward Island potato producers are also making changes to their production practices to improve soil health, encompassing the biological, chemical and physical qualities of soil. A number of producers have made changes to their crop rotation in recent years, adopting crops or mixtures of crop species which can build organic matter, reduce the incidence of soil-borne pests and diseases, and improve soil structure.

Islanders and visitors will likely notice fields of yellow-flowered mustard or white-flowered buckwheat on their travels around the province this summer. These crops were introduced to PEI primarily to battle wireworm, but both have been shown to have beneficial effects on subsequent potato yields and soil health characteristics when they are incorporated into the soil as a “green manure” crop.

Other crops which are being grown on Prince Edward Island to help build soils include sorghum sudangrass, pearl millet, hairy vetch, and oilseed radish, among others. In some cases, mixtures of multiple plant species are grown together, as plant diversity has been shown to foster a diversity of beneficial micro-organisms and insects.

Andrew Smith of Smith Farms Ltd. in Newton is experimenting with some different crop mixtures this growing season after hearing from multiple speakers this winter, as well as his own research into building soil health through crop rotation. “We are very interested in finding ways to build organic matter and diversity in our soil in order to make our soil more productive and more able to withstand some of the dry periods we get each summer,” notes Andrew. “After some research this winter, we’ve planted a number of our fields with a mixture of different species, including mustard, buckwheat, sunflower, sudangrass, peas, and a number of different grass and legume species. We feel that by planting multiple species at once, we are getting more benefits for the soil than planting the field to only species.”

A number of potato producers like Andrew Smith are taking the initiative to find ways to improve their crop rotation and tillage practices to foster the health of their soil and the sustainability of their farms. Several are also working with the Prince Edward Island Potato Board, Agriculture and Agri-Food Canada, and other partners on research trials to assess the impact of these crops on their soil and their crop yields.