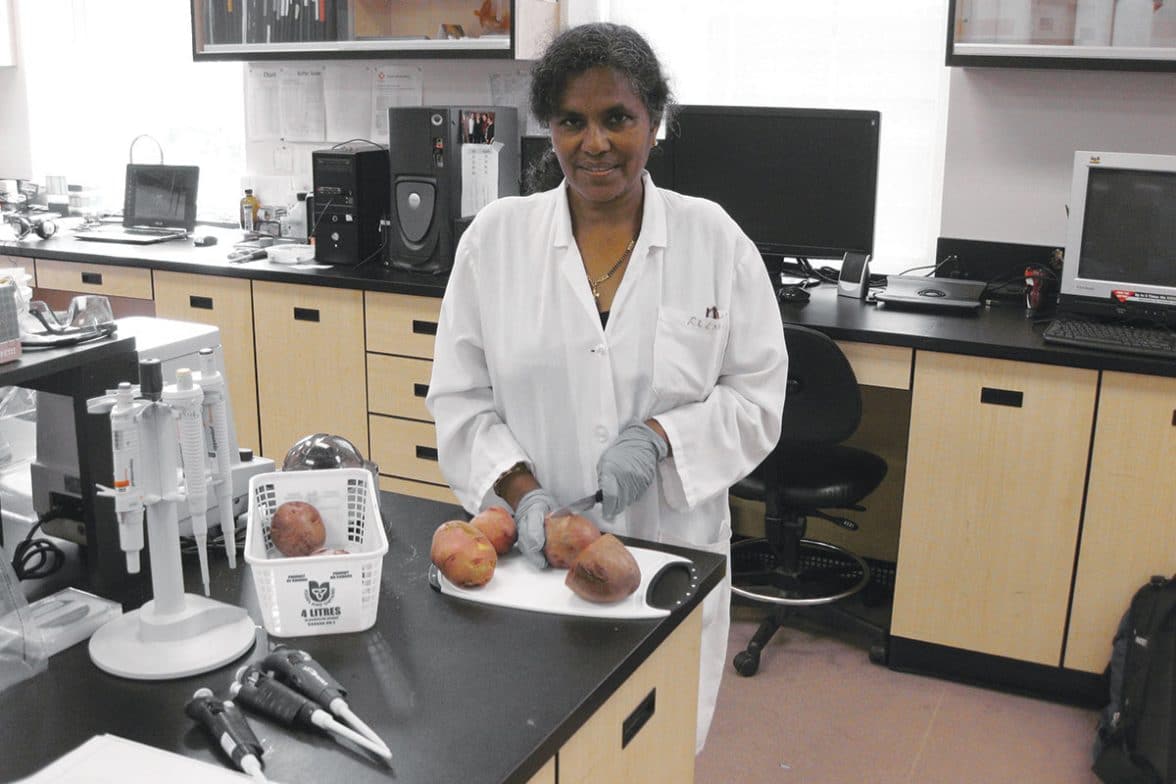 Potato research scientist Reena Pinhero at work at her lab at the University of Guelph Department of Food Science.

Nutrition in a Compact Package

Two Ontario scientists are researching the health benefits of potatoes, particularly pigmented tubers, and how to share this knowledge with consumers.

Potatoes are among the healthiest vegetables available to consumers but the focus on reducing carbohydrate intake in many weight loss plans has given them a black eye. Now, two Ontario research scientists are working to restore the potato’s healthy profile in an effort to re-educate the public and provide growers with more information to share about the nutritional value of potatoes — particularly, the health benefits of coloured tubers.

Agriculture and Agri-Food Canada researcher Rong Cao and Reena Pinhero of the University of Guelph’s Department of Food Science spoke about their work at the Potato Research Field Day held Aug. 13 at the U of G Elora Research Station near Guelph. Attendees were told that the long-term goal of these projects is to maintain and, possibly, increase the sustainability of Ontario’s potato industry.

“In Canada, the cost of an unhealthy lifestyle is around $30 billion per year,” Cao says. “The problem relates to poor diet, such as too few fruits and vegetables, too much fat, too little fibre, and too little water intake.” He says that potatoes fall into the “functional food” category because they offer solutions to many of these problems.

As part of his research, Cao is looking at the nutritional value of pigmented potatoes. The colour purple found in blueberries and coloured vegetables such as potatoes is associated with health benefits because of antioxidant properties produced by anthocyanins, a group of flavonoids responsible for creating the purple pigment. Cao believes consumers would be better served to get their nutrition from the source rather than taking commercial supplements to replace nutrients “we think we lack.”

As part of his research, Cao is examining the phytochemicals that are found mostly on the skin, peel and seed coats of vegetables, fruits, and grains, respectively. “These compounds are produced by the plants to protect themselves,” he explains. “But there are subgroups, and each one works on different aspects of human health. For example, polyphenols are not only themselves antioxidants but also help to regenerate vitamins C and E. If these vitamins don’t regenerate, they must be replaced often.”

Cao’s research might explain how pigmented potatoes can be incorporated into our diet for increased health benefits such as an improved antioxidant and anti-inflammatory defence system in humans. According to Cao, all the bioactive phytochemicals need to be stable in order for the body to absorb them, but that can be an issue during storage, processing or digestion. He says research shows that the body is better equipped to absorb these compounds by acquiring them through food, rather than pills.

“Recent research shows that certain phytochemicals in potatoes, particularly purple coloured ones can significantly inhibit key enzymes regulating blood glucose,” Cao explains. “We have also found that coloured potatoes will reduce blood glucose level in animals and humans. People are starting to ask for purple potatoes, but so far the industry has not been able to supply enough loose stock to satisfy consumer demand.”

A new research project started in 2014 by the University of Guelph’s Pinhero will enhance the work of Cao and his team. Pinhero’s work is designed to help educate consumers about why potatoes are a healthy choice. She says most consumers don’t understand that potatoes offer good nutritional value for their cost. That’s the reason her research focuses on spreading the message. “Potatoes are a carbohydrate-rich food, which has made them undesirable,” Pinhero says. “But when consumed in moderation, potatoes do not contribute to weight gain. While the glycemic index of some potatoes reported are medium to high, that needs to be balanced against the amount per serving.”

While potato growers are familiar with the nutritional value of their crop, how to share this information and provide concrete proof can be challenging. “Our research will consider maturity, growing conditions and variety versus moisture content, protein, the structure and condition of starch, phytochemicals, glycemic index and glycemic load,” Pinhero says. She explains that it’s important to compare glycemic index with glycemic load because the glycemic index shows the potential of foods to raise blood glucose levels, while the glycemic load is the amount actually consumed per serving.

Initially, Pinhero will analyse 11 to 15 early coloured potato varieties, such as Purple Fiesta, Dakota Pearl, Chaleur, and Adora. She will examine “the various components that could modify potato starch digestibility and the effect on glycemic index and glycemic load,” as well as other nutritional qualities.

This research is designed to provide the potato industry with nutritional information on different varieties; identify varieties with high antioxidant benefits, low glycemic indices, and glycemic loads; and improve the sustainability of the industry. “Our goal is to offer information to educate consumers about the benefits of potatoes,” Pinhero says.

Both Pinhero and Cao are committed to giving the potato industry concrete information that can be shared with consumers in an effort to restore potatoes to their primary perch as a North American food staple. Cao admits that Canadian societal tastes have changed and starch is now being ingested from many sources, such as pasta or rice. Where once every meal might have contained a serving of potatoes, consumers are no longer eating potatoes with that kind of regularity.

While many of Cao’s research results are available to the public, Pinhero is in the initial stages of her research with recommendations expected in two to three years. In the meantime, growers can do their bit to spread the message about the nutritional benefits of potatoes by sharing some health facts that are already available. Growers can also include new cultivars in their cropping plans to increase the availability of antioxidant-rich coloured varieties for consumers.