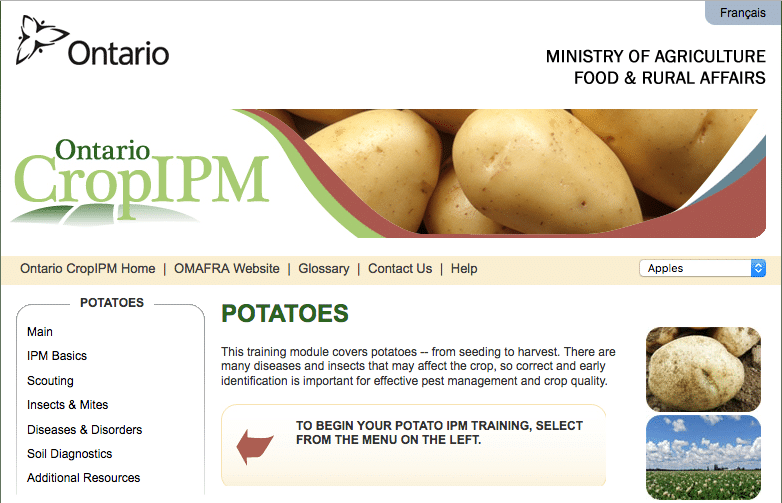 According to OMAFRA, “the module is a great educational tool with information for the common insect pests, diseases, viruses and disorders of potatoes in Ontario.”

The creator of the module is Eugenia Banks, OMAFRA’s longtime potato specialist who retired in late 2015. Completion of the module took about eight months, but its origins go back to 2004, when Banks edited the OMAFRA Potato Field Guide.

“The book was designed to provide guidelines and tips for correct identification of potato insects, diseases and physiological problems in Ontario, which are also found in most Canadian provinces,” she explains. “Before I started writing the book, I talked to many growers about this project. There was a consensus that the pictures should be large to compare with symptoms in the field and that there should be several pictures of the same disease to illustrate how the diseases develop in the field, from the initial symptoms to more advanced stages such as rotting of stems or tubers.”

The IPM training module itself includes summarized and detailed information about crop pests, diseases and viruses. In the “often confused with” section, growers and potato scouts can view and compare symptoms of different diseases and physiological problems.

“I had noticed that scouts were confusing diseases that show similar symptoms, but there are tips [in this section] that help them to come up with the correct identification,” says Banks.

When developing the IPM training module, Banks says she decided to “include the most important insects and diseases of potatoes, those that potato scouts need to identify correctly so that the information they provide to growers is reliable, and it will help growers to decide on the adequate management practices to control them.”

The module has an additional section on pest management practices and rearranged menus for diagnostics. Banks was also able to include updates on the latest developments on pest monitoring and control practices.

“It is relatively easy to update the IPM module if new pests arrive or if there are changes in recommended pest management practices,” she notes. “It includes the important problems that are either endemic – occur each growing season – and those that may occur due to seed problems, soil saturation, etc.”

Banks says she feels “very proud” of the module. “It is a good contribution to Potato IPM,” she says, “and it should facilitate better pest monitoring for potato scouts.”

Because it addresses pests found in other parts of Canada, the module is being widely used, and Banks has received much positive feedback from various sources across the country in person and through calls and emails.

Banks says online tools such as this module are very important these days.

“In many instances, time is a limiting factor to take courses,” she notes. “Having the option of taking online courses and studying on their own time is critically important for young people, especially those working in agriculture such as potato scouts. Currently, we no longer view our information only on our desktop or books, but also on smartphones and tablets.”

The training module can be accessed here: omafra.gov.on.ca/IPM/english/potatoes/index.html.