Presentation is everything when it comes to influence. A recent study by Leger surveyed more than 1,500 Canadians to discover their perception of GMO potatoes. Canadian Biotechnology Action Network, an anti-GMO group, presented the study as an overwhelming resistance to the technology. The actual numbers tell a different story.

Here’s a breakdown of the data – without spin (numbers are rounded and therefore, the total doesn’t equal 100 per cent):

When organizations can make data day whatever serves their purpose, what’s to stop agriculturalists from telling the real story? Why can’t growers turn that 38 per cent of maybes into informed consumers who understand the safety message hidden behind a ‘scary’ acronym like GMO?

“It’s the responsibility of everyone involved in food and agriculture to reach out to the other 99 per cent regarding the importance of new scientific advances to increase food production and improve the sustainability of farming,” he continues.

Think back to the early 1990s when the FLAVR SAVR tomato was commercialized – albeit short lived. It carried promise to reduce waste and improve flavor, a promise which never came to fruition.

“When the first GMO product, the FLAVR SAVR tomato, came out people had no idea what GMO even meant,” says Kurtis Baute, climate change activist who produces frequent videos promoting science. “It was something that really came out of the dark for them, and it was surprising and scary for many. Because of that, we ended up shelving the idea.”

The long and short of it, if you need a reminder, is public backlash led to pulling FLAVR SAVR tomatoes from the shelf — despite the scientific reality there was no risk in consuming them. People didn’t know what they were, and ignorance bred fear, which manifested itself into nixing the product.

Fear lives on. Activist groups around the world are still fighting against GMOs, despite what has now been more than 20 years of research indicating no adverse human or environmental effects.

For potato growers in Canada, GMOs could provide valuable pest resistance and help them be more competitive with United States growers who use GMO products. However, right now there are no GMO potatoes harvested in the country. Changing consumer perceptions, and thereby creating a demand for these products, is what it will take.

And the stakes are high for more than just those reasons. GMO products could be the key to reducing the impact of climate change and tackling hunger and food insecurity around the world. If science isn’t trusted, GMOs and other modern practices are at risk. 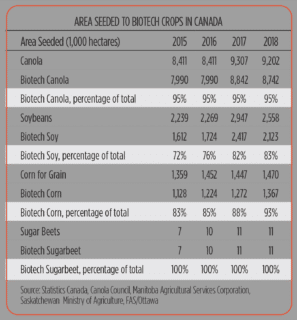 It’s easy to overload people with facts. But the fact is, most people who don’t have farming backgrounds don’t care about the nitty-gritty details of scientific testing as a farmer might. It takes a different approach.

“Anytime you are promoting scientific ideas, you’re going to have people who are not excited about them,” says Kevin Folta, professor at the University of Florida. “It applies to all science, whether you’re talking about genetic engineering or climate change.”

Employing these three tactics helps get the conversation off on the right foot.

Plant breeders in Canada are waiting to hear the outcome of new guidance for Novel Food Regulations focused on plant breeding.

Whatever decision is made regarding breeding techniques could make or break the future of plant breeding in Canada. This decision could directly impact how gene editing, through technologies such as CRISPR/Cas9, is regulated.

“Cas9 (based gene editing) is a great example of something that’s happened naturally for billions of years and now we’re applying a process to our benefit,” says Baute. “It’s important to communicate the benefit. This technique will be more precise, and we’ll know exactly what we’re breeding for, compared to older breeding techniques.”

For potato growers, the fight for this science hits close to home. Diploid potatoes use gene editing and are poised to improve yields and pest resistance faster.

Today’s potatoes are most often tetraploid, which means they have four copies of every gene, explained Paul Bethke, U.S. Department of Agriculture plant physiologist in a recent virtual panel at the 2021 Potato Expo. “Diploid potatoes have two copies. It doesn’t seem like much of a difference, but actually it makes things so much simpler when you’re doing breeding.”

The high-level reason diploid breeding is beneficial is because it could speed up the process and creates fewer crosses with undesirable traits that can show up when creating new varieties. Breeders weed out deleterious alleles and add in favorable alleles and then start making new crosses — which is much easier in a diploid system.

CRISPR/Cas9 and other gene editing technologies could revolutionize the breeding industry for many crops — if given the latitude to be used. The precision associated with the technique results in better products, faster production and the ability to cater breeding to the needs of today’s farmer and consumer.

“We need to be champions and advocates across the biological, the digital and the agronomic space to amplify the accurate messages,” Fraley says. “Because it’s just one per cent of the population in agriculture reaching out to the 99 per cent.”

It’s never been more critical than today to advocate for science literacy. While social media, television and other platforms represent opportunity to talk about science, it also dispels a tremendous amount of misinformation.

When is a Novel Food Novel? That Question is Finally Being Answered