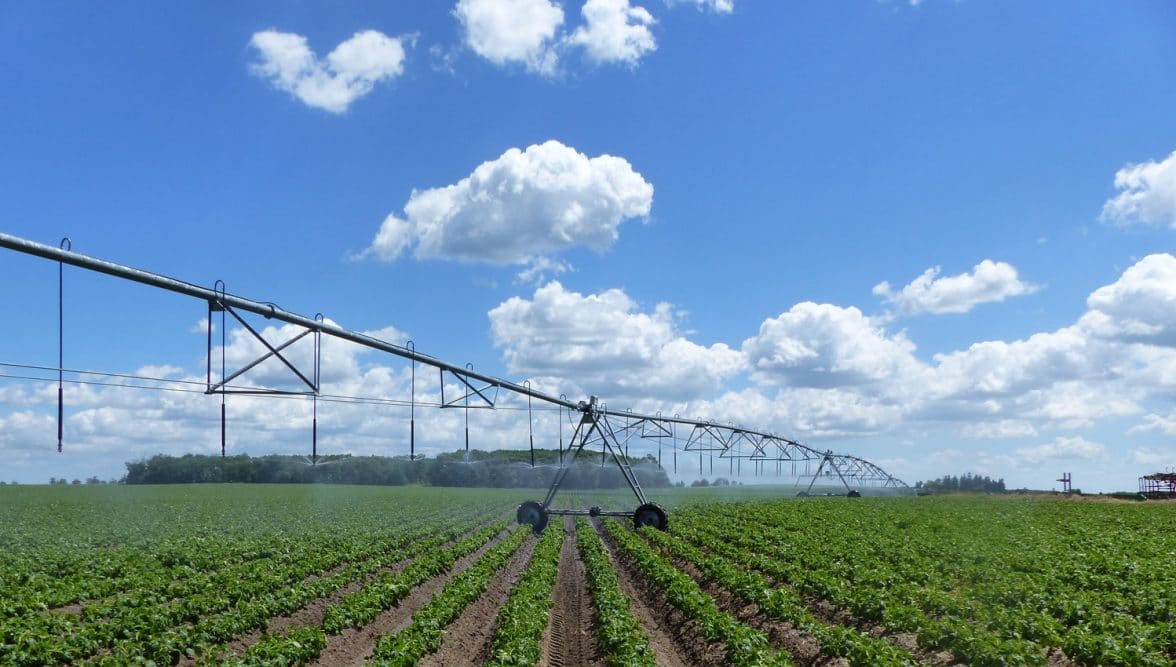 A field being irrigated at the tuber initiation period. (Photo: Eugenia Banks)

Potatoes and Water Management: From Deluge to Drought

Potato producers know all too well that controlling Mother Nature is as likely as reigning in a two year-old. In either case, you’re doomed before you start.

At the same time, there are ways to optimize water use efficiency and minimize the damage from floods and droughts.

For this edition of Roundtable, Spud Smart assembled five industry experts to discuss the importance of water management to potato production, and how to deal with a shortage or excess of Mother Nature’s most precious commodity:

That’s because, as Dingwell explains it, “we need enough rain to maximize crop yield, yet too much or too little restricts growth.” With potatoes being a fairly high value crop, Dingwell stresses that any water issues can have major financial implications.

“Potatoes are shallow-rooted plants with finely branched root systems and are therefore sensitive to even minor deficiencies of water in the root zone,” she notes. “Potato tubers contain no less than 80 per cent water; the rule of thumb is that the potato crop needs an inch of water per week to produce a good quality crop.”

Whenever potato plants are subjected to small moisture deficiencies, Banks says the growth rate is reduced, and the moisture stress on the plant will affect both the quality and yield of tubers.

LET IT RAIN…FOR A WHILE

While water is a necessity, too much of a good thing can be bad news for potatoes.

“Too much rainfall has consequences that are numerous and complex,” says Banks. Some of the most notable problems she points to are inadequate weed control caused by herbicide leaching, flooding of low spots resulting in plant death, storage problems and disrupted planting/harvest schedules.

One issue that is especially troubling to LeMere is blackheart.

“Potatoes aren’t able to respirate properly when they’re surrounded by water and there’s no oxygen exchange going on. The tissue on the inside of the tuber starts to die, and blackheart is basically a large black circle of dead tissue in the middle of the tuber.

Adding to the blackheart issue is that “many times you won’t know you have it unless you start cutting potatoes open or going to the processor, so it’s sort of a silent killer.”

Short of divine intervention, reining in the rain is impossible. According to Harms, the next best thing is proper preparation.

“Potatoes need to be grown on a hill furrow design in accordion style. This causes excess water to run off the hill and keeps the tuber and plant from getting too wet,” he says.

For places like Manitoba with little topographic relief on the landscape and high water tables, Harms advocates tile drainage to remove excess water from the field, which allows roots to breathe.

Depending on your situation, Banks also has a number of suggestions. “Cover cropping and green manures help preserve the soil structure and maintain good drainage and aeration.”

Since fungal and bacterial seed diseases may reduce stand establishment and crop vigour, Banks says fungicide-treated seed is almost always recommended, especially in years where conditions are conducive to disease.

In some instances, growers may want to consider aerial applications once scouting has confirmed the target pest is present.

“Late blight is a devastating disease that causes epidemics when wet weather prevails. If symptoms are found, destroy infected plants by removing them from the field and apply appropriate fungicides to the remaining crop immediately.”

Other tips on her list include watching for herbicide inactivation and replenishing fertilizer lost to excess soil moisture.

HEY, WHO STOPPED THE RAIN?

When you ask experts if it’s worse to have too much rain or not enough, the answer is “yes.” For those who don’t use irrigation, a long-term plan is vital to deal with water shortages.

Banks seconds that. In her talks with producers, Banks has found organic matter to be a key factor in managing drought. To that end, she urges growers to maintain or increase their organic matter content by using cover crops or organic amendments.

Another approach involves use of a Dammer Diker. By making little pockets or divots in the landscape, Harms says you can ensure that any rainfall is soaked into the ground and retained in the field for later use when water is scarce.

For those times when extreme measures are needed, Hochstein cites the example of Alberta growers in the early 2000s.

“When there wasn’t much water in the reservoir, it became a serious management issue where producers took water away from less valuable crops and used it on specialty crops like sugar beets, canola, corn and potatoes.”

As with any area of agriculture, success in potato production and water management means keeping current with the latest techniques.

“The big one being looked at these days is variable rate irrigation (VRI),” says LeMere.

Because the technology is quite new, many of the growers LeMere talks to are waiting to see some numbers before they invest in the equipment.

This enables a producer to sit in their office and not only pull up their irrigation systems, but know what systems are on and what they’re applying at, as well as getting their soil moisture information remotely.”

Though it may be less hi-tech, Harms and his colleagues had good success with a water saving method they tested as part of a three-year study.

“After flattening out the hill and making it more of a bed, we planted three rows of potatoes along the bed. Since more water stayed on the hill and didn’t get into the furrow position, we achieved a 10 per cent water saving just by changing the configuration of the hill,” he notes.

For those who are digitally inclined, Harms says to check out the free web-based irrigation management tools available through Alberta Agriculture and Forestry or download the app that offers the same benefits.

DON’T FALL BACK; SPRING AHEAD

While it’s often human nature to dwell on the past, Banks is a real proponent of looking ahead.

Banks also points out that since late blight outbreaks are common in wet weather, keeping the crop protected before that rain falls is essential for managing this disease.

In keeping with her pre-emptive approach, Banks says “you need to monitor fields to detect diseases, insects or physiological problems early on as they are all yield robbers. Last but not least, be aware of the status of the potato crop in your area/province through resources like weekly newsletters.”

Also a supporter of proactive measures, LeMere advocates staying informed and getting involved in local water regulation and policy groups.

“Understanding our water use policies and participating in those discussions is going to be more important than ever in the coming years. We’re proactive as an industry, but I don’t think that our policy makers and our public know that. We have to get involved and be aware of regulations that are coming up so we can be part of this conversation.”

Regardless of your challenges and choice of solutions, Dingwell believes attitude is everything.

“As producers, we have to be eternal optimists or we wouldn’t be doing what we’re doing. You can’t turn the tap on or off for moisture, so you need to keep believing that things will be better next year.”

If you do that, maybe you can lose the odd battle with Mother Nature or that terrible toddler and still win the war.