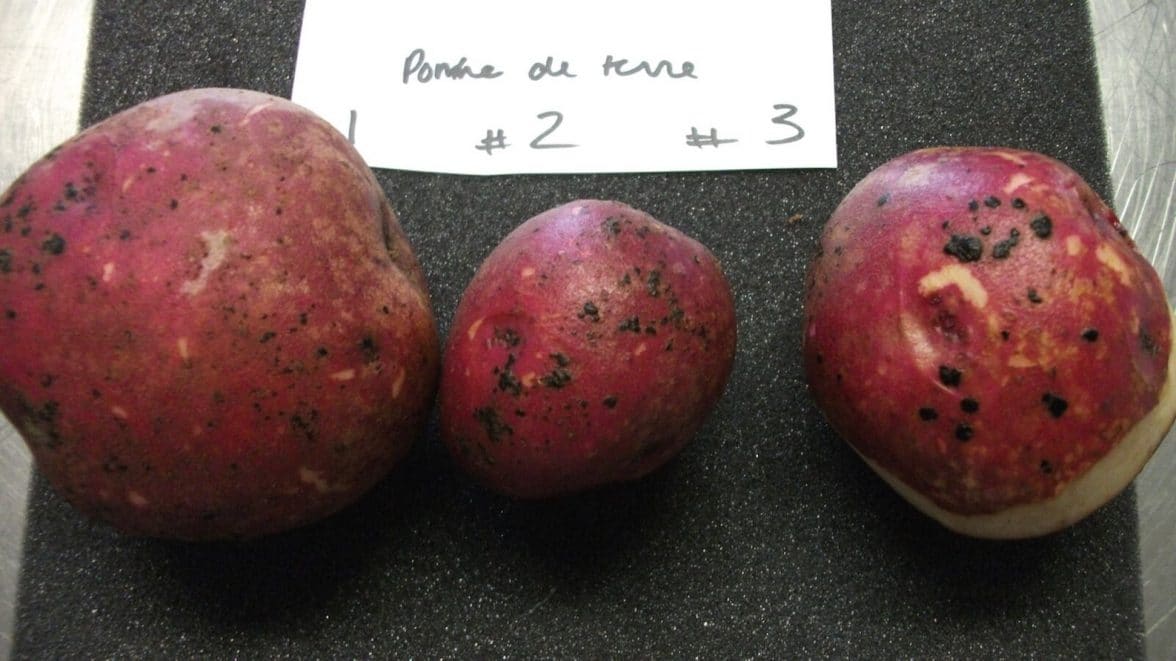 It can be challenging to find a pesticide that is specific to controlling Rhizoctonia on potato, pictured here. (Photo Hervé van der Heyden)

For potato farmers, soil-borne pests and diseases are like that pesky younger sibling that’s always trying to get you in trouble: ignore them at your peril. Hazards such as Verticillium, nematodes, pink rot and Rhizoctonia can have a big impact on the bottom line if not kept in check.

For this edition of Roundtable, Spud Smart sought input from three industry experts on the financial importance of these potato problems, and best practices for detecting and controlling them:

Just as the squeaky wheel gets the grease, it’s the costly crop invaders that warrant special attention from producers. According to Hervé van der Heyden, there are nine such diseases in Canada that he calls “economically important:” Verticillium, nematodes, pink rot, Rhizoctonia, powdery scab, common scab, silver scurf, Pythium and black dot.

“These conditions are a considerable problem for the potato industry, and also impact the seed and transportation sectors,” he says. “The potato business in Canada covers 100,000 hectares, so farm gate values are significant.”

While pests are a common problem with many crops, Mario Tenuta says they’re especially troubling for potatoes.

“Potato is a root crop, a tuber crop, and we harvest the tuber portion so soil-borne pests are more important than for most other crops. Also, if the tuber doesn’t look good it will be less marketable.”

In addition to a yield decrease, these pathogens can cause storage loss if the tuber is damaged at harvest, gets infected and rots in storage.

Of particular concern to Erica Fitzpatrick Peabody is pink rot.

“It’s causing serious economic damage to producers in terms of yield loss and storability,” she says. “Once pink rot is in the soil, it is very difficult to get control over; we don’t get a clean slate every year as we do with some airborne diseases like late blight.”

Depending on the disease, yield loss can vary from five to 50 per cent by Tenuta’s estimate. If farmers lose 50 per cent of their crop, “they’ll either stop growing potatoes or try to fumigate; either way, it’s a bad situation.”

The best way to defeat an enemy is to stay one step ahead of them. Three years ago, van der Heyden and his colleagues started a project to do just that.

“The idea was to detect and quantify soil-borne diseases through molecular biology techniques.”

Starting with silver scurf and powdery scab in 2014, they developed sampling strategies using molecular assays or tests to detect how much disease is present in the soil.

The benefits of this approach are two-fold. “When we develop an assay for a given disease, it will only give a positive signal on that disease and not on anything else. It’s important that we not give false positives and negatives to growers and crop specialists, and the molecular-based approach is less likely to do that.”

As well, because they are dealing with DNA, the test is very sensitive, detecting as little as one spore per gram of dry soil.

Contrast that with the traditional approach and Tenuta says the choice is clear.

“For decades, the method involved a lab examination to try and isolate the organisms out of the plant or tuber or soil, grow them in the lab and then try to identify and count them,” he says.

It was costly and time consuming (and inaccurate in the case of Verticillium), which prompted researchers to look for a better way and find it in molecular biology.

That doesn’t mean the new approach is perfect. “The drawback is that standardization across soils can be challenging,” notes Tenuta. “For example, it’s harder to obtain the pathogen DNA from clay soil than from sandy soil. You also need to remember that we use very little soil (200-500 mg) for testing, so if the disease is only present in some parts of a field, it can be hit and miss as to whether you find it.”

The molecular technique is also affecting how we minimize the damage from pests and disease.

“Currently, the main approach in Canada is seed treatment, using chemical pesticides to treat the seed,” says van der Heyden. “Planting potatoes in soil where you don’t know how much disease exists is a risk, so we use pesticides to lower that risk.”

By using the new tools, however, researchers hope to quantify the amount of pathogen in the soil before seeding, thereby helping producers choose another approach to disease control.

“Farmers might employ cover crops that reduce the amount of certain diseases or choose a particular cultivar, as each one has a different sensitivity to pathogens.”

Crop rotation is another option for potatoes. If you have a lot of powdery scab or silver scurf, you may want to plant another crop such as maize or soybeans to give the soil a break.

Since soil testing is expensive, van der Heyden doesn’t expect growers to do it every year. At the same time, he hopes they add testing to the list of control techniques and move fungicide application to the bottom.

“They should look first at cultivar selection, then crop rotation, then cover crops and soil testing. Fungicides should be the last thing they consider to manage soil-borne diseases.”

For his part, Tenuta echoes the need to move away from pesticides as the method of choice. “Not only are they costly, but for some diseases like Verticillium, Rhizoctonia and common scab, it’s challenging to find a pesticide that is specific to controlling that disease.”

As a result, producers tend to choose broad-spectrum fumigants that kill many other organisms. While yields will increase as a result, so will operational costs. And fumigation will unbalance the soil for a long period of time, notes van der Heyden.

From her perch in the eastern United States, Erica Fitzpatrick Peabody says producers have only recently come to grips with some of the problems associated with soil-borne hazards.

“In the past we didn’t really appreciate the impact of these diseases. They might limit your crop, but they didn’t prevent you from growing potatoes and storing and selling them.”

Sure, they knew there was a problem; they just didn’t dig deep to see what was behind it. Now, though, they are “really focused on figuring out what’s there, how much is there and how they can deal with it.”

That increased focus couldn’t come at a better time in Tenuta’s opinion.

“There is so much global competition now in the potato production business,” he says. “Growers in potato growing areas must consider their ability to compete with other such regions. We are all trying to get as much potato production per yield as possible, and companies don’t want any stoppage in production so they can meet their targets.”

In this environment, if a pathogen gets away from you and decreases your yield, it could put you out of business. “There is real pressure on producers to make contract, and these pests and diseases can really hamper that.”

Still, Tenuta is optimistic that industry is up to the task.

“Over time, the molecular approach for identifying and quantifying disease will get more sophisticated and cheaper, making it more accessible. This will be good news for farmers as they will know what they have and can respond to it.”

And given the many challenges for farmers these days, a little good news can go a long way.