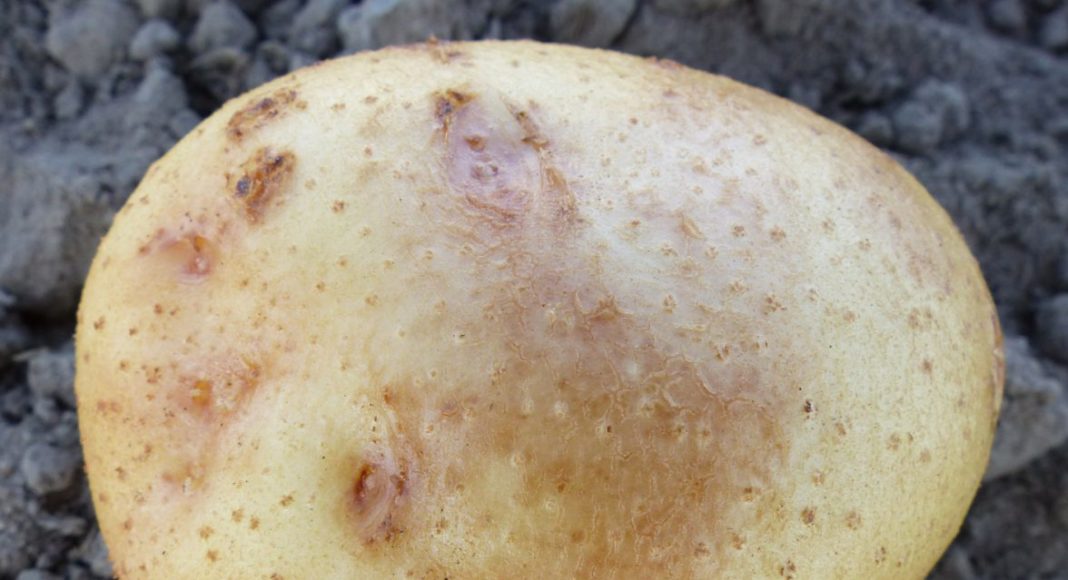 Pink eye is a sporadic disorder of potato tubers that may result in a significant loss of quality after harvest. The typical symptoms are pink, slightly raised areas that are easy to see on moist, freshly dug tubers, but difficult to notice on dry, unwashed potatoes.

The affected areas usually occur around the eyes and at the tuber stem end. Pink eye will dry out under cool temperatures and low humidity in storage. However, severe pink eye affects the tuber flesh. Soft rot bacteria can easily penetrate the affected areas and cause tubers to rot if humidity is high.

Pink eye is usually associated with warm, wet soils at harvest, with non-rotated fields and with Verticillium wilt. Under extreme conditions, the skin develops corky areas before or after harvest, which make the tubers unmarketable for either fresh market or processing. Pink eye may also cause skin cracks when the lesions dry out.

The varieties Yukon Gold, Superior, Kennebec, Shepody and Pike are prone to this disorder.

Ed Lulai, a potato physiologist with the U.S. Department of Agriculture, has been researching the causes of pink eye and has just published his results.

He suggested replacing the name pink eye with “Periderm Disorder Syndrome” (PDS). The pinkish coloration is short-lived, not causal and often not present. Pink eye is also found on the tuber surface—not only on the eyes—so the name is misleading.

Periderm is a technical term for potato skin. Lulai’s results are consistent with previous findings which show PDS is directly related to the death of actively dividing skin cells. Cells around the dead areas start to divide and expand, but the resulting divisions are disorderly, hence the name Periderm (skin) Disorder Syndrome. Dead cells no longer act as a barrier to tuber infection and dehydration, which results in storage problems such as soft rot or corky lesions.

An easy test for PDS is to put tubers under UV light. The affected areas will fluoresce blue. This is due to the accumulation of suberin compounds in areas of disorderly periderm synthesis.

What Can Be Done to Reduce the Incidence of this Syndrome?

We have known this problem as pink eye for many years. Periderm Disorder Syndrome does not roll off the tongue, but it is likely to appear in scientific publications and will start to appear on slides in presentations.

Fusarium is the most common fungus responsible for seed-piece decay and dry rot. Although Fusarium is found in most soils, infected seed tubers are...
Read more
Industry

The 2020 Ontario Potato Conference and Trade Show will be held in Guelph, Ont., at the Delta Hotel and Conference Center on Thursday, March...
Read more
Tweets by SpudSmartMag