Rainfall in the week (Tuesday, Sept. 2 to Monday, Sept. 8) was extensive in distribution in the province, but not as heavy as last week. Though only a few sites recorded close to 1-inch of rainfall, most fields don’t need anymore rain.  The maximum temperatures were generally warm, but the minimum temperatures have gone below zero in a few sites. 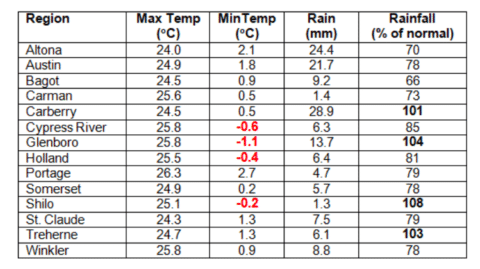 Potato harvesting is progressing, but has been slowed or interrupted in some places due to rains. Most Russet Burbank fields have started senescing naturally. Early blight disease is more severe now in some fields (Fig 1). Stressed or senescing plants are more prone to early blight and no fungicide is recommended at this late stage.  Early dying–, Verticillium-affected plants appear to be less extensive than last year.

The 10-day forecast indicates a break in rainfall for over a week, beginning Saturday (Sept. 14).

Due to frequent rain and substantial rain events and based on cumulative DSVs for the week, (up to Sept. 5) – for the week the risk for late blight has been medium to high in Manitoba; however, NO late blight disease has been reported from anywhere in Manitoba.

In the last 10 years, the 2nd week of September (in 2015) was the latest first report of late blight disease.

In the Simplot Research Project late blight spores were NOT trapped in any of the three sites, in the RMs of Cornwallis, North Cypress and Dufferin. It is still important to scout diligently in low-lying or wind-protected areas in the fields.

Again, the rains in the week (Tuesday, Oct. 1 to Monday, Oct. 7) were extensive in distribution in the province, but slightly less than...
Read more
Industry

Rainfall in the week (Monday, Sept. 16 to Sunday, Sept. 22) was extensive in distribution in the province, and heavier than last week. The weather...
Read more
Tweets by SpudSmartMag