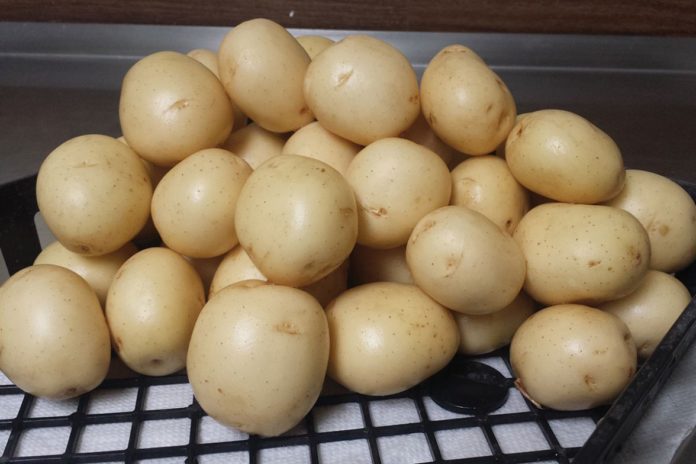 [deck]A new potato variety developed by Agriculture and Agri-Food Canada could open up new menu possibilities for people with diabetes and others who follow low GI diets.[/deck]

Agriculture and Agri-Food Canada project lead Benoit Bizimungu says this development could help consumers to achieve sustainable weight loss and improve the management of diabetes. Not only that, but the new low glycemic index variety could create new market opportunities for potato growers.

Glycemic index or GI is a relatively new way of measuring the impact of foods containing carbohydrates on blood sugar.

While high GI foods are digested quickly and can cause a big spike in blood glucose and insulin levels in the body, low GI foods digest more slowly, creating more stable blood sugar levels. Depending on how they’re cooked, potatoes can rank from medium GI to high GI, so there’s certainly a market for low GI potatoes, which is good news for growers.

“Increasing the levels of resistant or slowly digestible carbohydrates is part of the strategies to improve the food attributes of potato. People who want to avoid elevated blood glucose levels after meals, including those with diabetes, are interested in low GI and use a rating system to choose foods,” says Bizimungu.

“There is also documented evidence that resistant starch presents digestive health benefits, which are appealing to health-conscious consumers.”

Breeding a low GI potato involves a variety of technologies and methods, both old and new, including the use of molecular markers, near infrared technology and quality screening tools.

“New plant breeding tools and technologies are helping to improve screening capabilities and contributing to improving efficiencies,” he continues. “With these new tools, we can screen plants without even having to grow the material in the field in some cases.”

Parkland Seed Potatoes Ltd. in Edmonton, Alta., has been granted exclusive testing rights for the low GI potato. The company also has the option to license it.

According to Bizimungu, Parkland Seeds was the successful bidder and has now entered the advanced testing stage of AR2012-04. “Seed source for AR2012-04 has been released to the company for multiplication, and official registration with Canadian Food Inspection Agency of the new variety is pending,” he says.

Caroline Sawatzky of Parkland Seed Potatoes says the company has been encouraged by what it’s seen so far.

“We will do additional testing to confirm the low GI status. Beyond that, however, we will also test the variety for yields, resistance to common diseases, skin finish and flavour, as we would with any new variety we are trialing. Based on initial test results of the low GI status, we are very encouraged by the variety and do plan to license it,” Sawatzky says.

“A low GI potato has the potential to be a great boost to the potato industry and to consumer health. A lot has been written about how a low GI diet could help in the battle against obesity. A low GI potato, then, can be part of a healthy weight management program for consumers,” she continues.

“For the producers, if the low GI potato is successful, it provides growers with an alternative to the traditional potato crops.”

Registered dietician and certified diabetes educator Joanne Lewis is the diabetes education manager at the Canadian Diabetes Association. She says a low glycemic potato is a promising development for health conscious individuals, particularly those with diabetes.

“A benefit of low glycemic index potatoes is that people with diabetes could feel free to eat them more often as part of their healthy meal plan,” she says.

“As far as we know, low GI potatoes have no harmful side effects. They are a variety of potato that has been found to digest more slowly due to the shape of the starch molecules. This will result in a lower blood glucose effect and a greater feeling of fullness after eating.”

Lewis points out that it’s still important not to overeat potatoes, even the low GI varieties, though. “Larger portions equal higher blood glucose levels in people with diabetes,” she warns. “Even with a low GI potato, portion sizes are important to keep in mind.”

While people with diabetes may be familiar with GI, the average consumer, says Lewis, knows very little about GI, making consumer education key.

“Individuals who prefer to eat potatoes but avoid it due to the fact that it has a higher GI will be happy to know that a low GI potato variety is available to be added to their meal plan more often,” Lewis says. “The other nice aspect is that it provides another starch option for healthy low GI meal planning — variety keeps meal times interesting.”

WHERE ON THE WEB