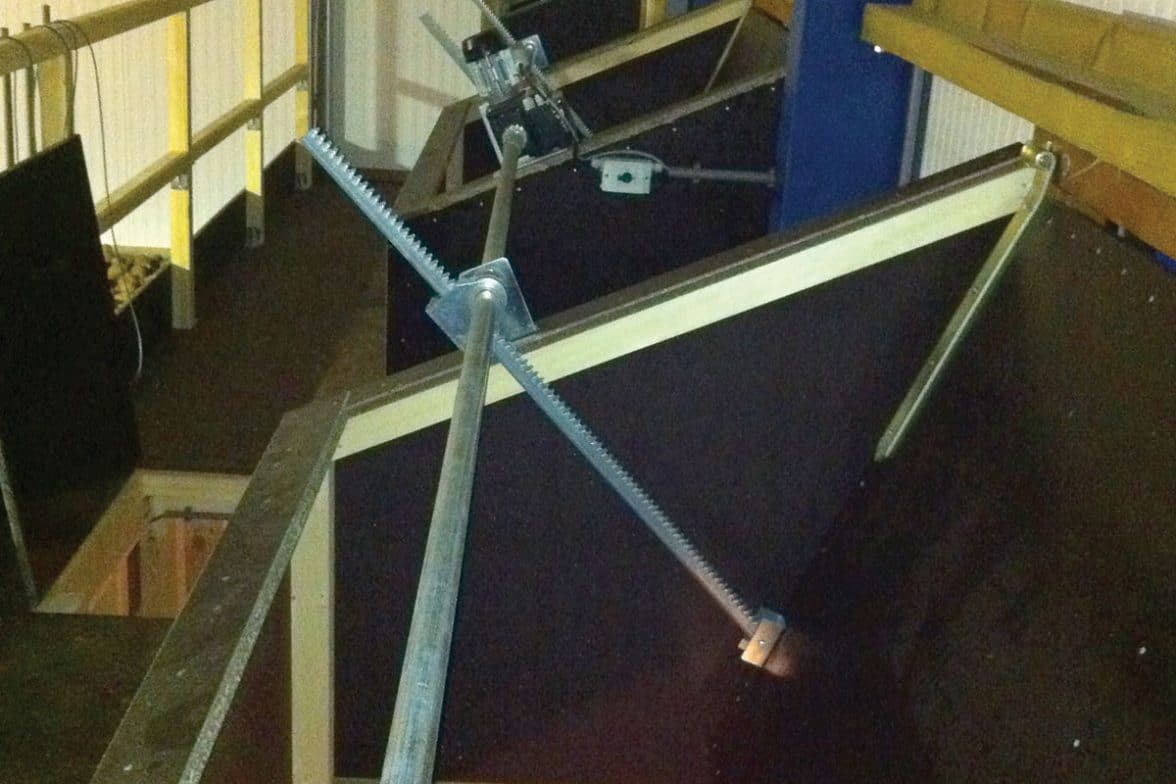 The Omnivent system offers a number of advantages based on maximizing operational efficiency.

Visser and Sons sets a new standard in long-term storage.

Maximizing efficiency and longevity are the driving forces behind a new potato storage facility that is being built at Gerrit Visser and Sons potato farm at Orwell Cove, P.E.I. “We are building a storage that is intended for long-term use,” says Randy Visser. “We are trying to maximize everything and make everything as efficient as possible. It’s the reality of the industry that there is much more concern with the quality and consistency of the product than in the past, and if you are not on top of that it’s not going to be too long before you start to fall behind.”

The Vissers’ investment starts with the building itself, which has been designed to last and remain as airtight as possible. The building is an insulated concrete form structure, which consists of Styrofoam blocks on the outside and inside and a concrete wall in the centre. The concrete provides the structure with strength and a tight seal.

“We have gone with a six-inch concrete wall in the centre, and that keeps air movement down to almost nothing,” says Visser. “Then the Styrofoam on the outside and the inside makes for a really airtight, well-insulated building that is structurally strong, so it should be able to withstand a lot of weight from the potatoes and any strong winds from outside. We anticipate the life span of this building should be a lot longer than a traditional stick frame building.”

The new, 16,000 square-foot storage facility has the capacity to handle six million pounds of potatoes, and is designed to provide operators with the ability to reduce the pile height to prevent problems with pressure bruising in the lower parts of the storage bins.

The desire for a well-sealed, long-term storage has carried over into the design of the ceiling, which incorporates a layer of spray foam between the ceiling and the layer of blow-in insulation to create an airtight seal and prevent condensation problems. Extreme temperature differences between the building’s inside and the outside environment can cause condensation issues, and if moisture gets into the attic insulation it reduces its effectiveness. “The whole idea is to put this spray foam in and make it very airtight so there are fewer losses that way, and move the dew point such that the likelihood of any condensation in the attic is almost none,” says Visser.

The new ventilation system comes from the Dutch company Omnivent, and is the first installation of its kind on Prince Edward Island. The system uses more airflow—about two to three times as many cubic feet per metre as traditional systems—to more efficiently control the humidity in the storage.

“We are hoping that increase in CFM capacity, along with the more advanced sensors and controls in the system, which monitor humidity and temperature, will allow us to vent at optimum times with more air, but less often, and in less time,” says Visser. “That should make for a potato with less shrink, less pressure bruising and better quality.”

Visser’s system, which was shipped from Holland, certainly isn’t the cheapest, but the company’s intent isn’t to compete on price, says Paul Kok, North American sales manager for Onmivent. “Our system is more costly than a traditional, standard system that you can get in Canada, but we always talk about the longer-term return on investment,” says Kok. “If you have a bin that goes bad and you have to deliver it in January with 15 per cent losses because of bacteria or wet tubers, if you could have saved that pile and kept it until June or early July and delivered it, that initial investment would have paid for itself in one season.”

The Omnivent system offers a number of advantages based on maximizing operational efficiency and achieving a better-quality product at the end. The main benefit, says Kok, is that the system ventilates with more air capacity. “There is better management of risk to minimize dehydration losses during storage and maximize your storage period,” says Kok, who adds that the advantage of the Omnivent system demonstrates its superiority to conventional systems when there are problems.

“A traditional system uses low volumes of humidification, which also minimizes dehydration,” says Kok. “But minimum ventilation rates don’t give as much control of your crop when there is breakdown or when you have a wet crop inside the bin. With the Omnivent system there is more flexibility because you can switch off some fans when you don’t need total capacity.”

The Omnivent system is able, due to the higher air capacity, to lengthen the window of opportunity to use outside air rather than refrigeration, a window that closes rapidly as temperatures begin to warm up in the spring.

“When the time window closes as outside temperatures increase, you can still ventilate with outside air without having to use refrigeration equipment,” says Kok. “You have more control and fewer energy costs to push that cold air through your crop. If we ventilate with twice as much air capacity it means that we can halve the amount of time it takes to cool down the crop, so if nighttime temperatures go up, but they are still lower than the temperature of the crop for, say, four hours, if we ventilate with 60 CFM, we only need four hours to cool the crop. With a traditional 30 CFM system you would need eight hours, and you could run into difficulty if you don’t have that time window available. Then you would have no choice but to turn on your refrigeration equipment.”

Before making his decision to go with the Omnivent system, Visser visited the farm of Jake Hoogland, who is also a dealer for Omnivent, and has installed a similar system on his farm in Alberta. “We talked to him and went out and visited his place early last spring and went through his system, which was a bit different because they typically have more box storage in Alberta, but it gave us an idea of what the system could do,” says Visser.

Visser intends to conduct a comprehensive study of the new storage facility and compare its performance to the conventional storage systems on his farm to determine whether or not the expected advantages play out in reality. He’s fairly confident that the system will give him more flexibility and a better product in the end. “It is a big investment, but the hope is that over the years it’s going to pay for itself in quality and better storability,” he says.