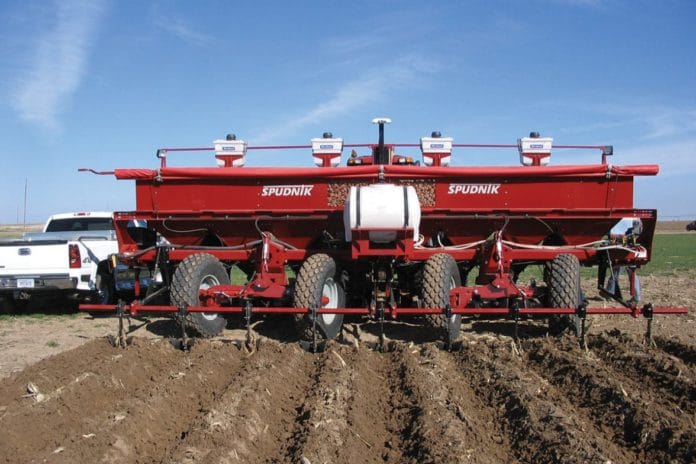 [deck]There’s a reason why potato growers have been among the earliest and most progressive adopters of global positioning systems over the past 30 years.[/deck]

To get the kind of accuracy required—typically to within an inch or better—farmers have had to rely up to now on RTK systems, which transmit signals from a base station via a wireless radio tower to the receiver in the tractor or other equipment. One disadvantage of RTK is that it has a limited range and coverage isn’t universal, as the infrastructure is expensive to install for retailers who usually provide the service on a subscription basis to farmers in the local area.

Farmers now have another option, thanks to a new product from Trimble. The company’s CenterPoint RTX correction service provides near-RTK accuracy and is delivered direct from a satellite, so it covers extremely large geographic areas and is simple to use. The farmer doesn’t require extra devices or other gear as the system is compatible with any Trimble equipment already on the tractor or other farm machinery.  While Trimble still recommends using RTK for potato planting and harvesting, it says CenterPoint RTX is ideal for other applications such as fertilizing and applying pesticides.

“We conduct annual producer surveys and one of the things we find year after year is that farmers see a lot of value in precision agriculture, but they still think it’s a little too difficult to use,” says Mike Martinez, marketing manager for Trimble’s Ag Division. “The CenterPoint RTX is another step in simplifying precision agriculture and still getting high accuracy. It’s the only product that exists right now that gives the farmers inch and a half accuracy virtually anywhere in the world.”

Farmers can also get GPS guidance systems for the planter and harvester as well as the tractor, to further improve accuracy. “We measured the variation of movement in a harvester and it can move six to eight inches side-to-side even though the tractor is perfectly straight,” says Martinez.

Probably the biggest trend in the GPS industry, however, is in software development that allows the integration of data collected from field equipment and provides better information management options for growers. Again, it’s an area that is being adopted by the potato industry.

I think it is important to give the potato growers a lot of credit for being proactive in getting the program initiated and getting the players to the table.

The Farm Records Management Project, partially funded by Agriculture and Agri-Food Canada’s Canadian Agriculture Adaptation Program and co-ordinated by the Canadian Potato Council (CPC) of the Canadian Horticultural Council, brings together a working group composed of potato growers, Farm Credit Canada and farm equipment and GPS manufacturers. Its goal is to try and figure out how to seamlessly connect farm management records software currently available with GPS information generated in the field.

In the spring of 2011, the Farm Records Management Working Group (FRM WG) of the CPC conducted a survey that identified FCC’s farm financial software programs and GPS systems produced by John Deere, Trimble and AutoFarm as those most commonly used by growers across Canada. As a result of further consultations with a grower panel about the improvements they would like to see, FCC signed an agreement with John Deere that they would collaborate on integrating the John Deere farm field GPS systems with FCC’s financial programs.

“I think it is important to give the potato growers a lot of credit for being proactive in getting the program initiated and getting the players to the table,” says Glen Kroeker, director of FCC Management Software.

In January 2012, FCC released its new software program, Field Manager Pro 360, with John Deere integration. “The biggest thing is being able to bring in the field data from John Deere equipment and have it auto-populate the software,” says Kroeker. “The equipment is gathering a lot of information and it saves producers from having to re-enter it into a different program, because they can download it directly. They have everything consolidated into one place rather than having some information in a harvester, some in a combine and some in a tractor.”

It does mean that growers need to make sure their equipment is set up to keep good records. That’s something some growers may have been a little lax about in the past, largely because data collection was a separate process from data analysis. With the new system, the two are combined as one function.

“Whatever records are in the equipment, that is what will transfer over, and they need to be keeping the records and utilizing the equipment capabilities,” says Kroeker. “But growers are realizing more value with the records and the things that they are able to use them for, so it’s worth that little bit of extra time and that is why it is growing in popularity.”

[GPS] is going to be faster to initialize and more reliable. You can basically trust that it will always be there.

Another reason why uptake has been good with the new software is that it gives growers the option to retrieve data for different aspects of their operation. That includes functions that help with inventory control and traceability. As an example, for potato growers certified under the CanadaGAP food safety program, the software will auto-populate CanadaGAP forms with the relevant information, helping to simplify the process and save time.

That has proven to be one of the major advantages of the new system, says Marlon Kuhl, chair of the FRM WG, who began using Field Manager Pro 360 on his own farm near Winkler, Man., this past summer. “It gives us all the information we need for our food safety audit and our field records all in one location,” says Kuhl. “In the past we have had kept our farm records in one place, our storage records in another, and our inventory in another. This system incorporates them all into one place and allows us to pull off reports that we can use.”

The next step for the FRM WG is to try and get some of the other farm equipment and GPS manufacturers in the industry involved, says David Jones, manager of potato industry co-ordination at the CHC. “There is a commercial program available now, and the next step is to get the other manufacturers involved and also to refine the program,” says Jones. “Our working group will be meeting in the new year to evaluate how the system worked and gather any suggestions about how to improve it.”

Trimble has also introduced its own software service, Connected Farm, designed to better manage and integrate GPS field data. “The GPS is recording where it planted and where it spread fertilizer, where it did harvesting, all this data, but there’s not really been a central repository for all that data or a way to use it,” says Martinez. “Connected Farm is a way of centralizing that data and giving the grower a tool to compile it and make informed decisions about any aspect of his operation.”

While GPS hardware continues to evolve and becomes standard in a lot of farm equipment now available on the market, it’s the software aspect that Martinez feels will give the farmers more functionality and translate into more value in the future. “The information piece is really what is going to bring everything together and take growers to the next level,” he says.

It’s nice to know that GPS technology is going to be around for a while, thanks to a new generation of 2F satellites.

“The first satellites were launched in the1970s but the lifetime of a satellite is seven to nine years, so they have constantly been putting up new GPS satellites over the years to replenish the constellation,” says Mike Dentinger of Trimble’s Ag Division. “Each time they add capability and technology to the system that has been developed since the last satellite generation went up. The 2Fs are the last of the generation two GPS satellites, and the next step will be generation three.”

How that translates into benefits for the potato grower using a GPS-guided planter, tractor or harvester is in improved accuracy.

Satellites transmit signals down to earth which are received by GPS receivers.  By receiving signals from a group of satellites, it’s possible to mathematically calculate the actual position and velocity in time of that receiver on earth. “The 2F satellites include an L5 band, which is a new signal coming off the satellite,” says Dentinger. “That gives another observable in your calculated position fix. Having multiple observables allows you to calculate a position fix with greater accuracy.”

Accuracy is the name of the game in GPS, and as the technology progresses it’s just going to get better, faster and more accurate. “It is going to be faster to initialize and more reliable,” says Dentinger. “You can basically trust that it will always be there.”