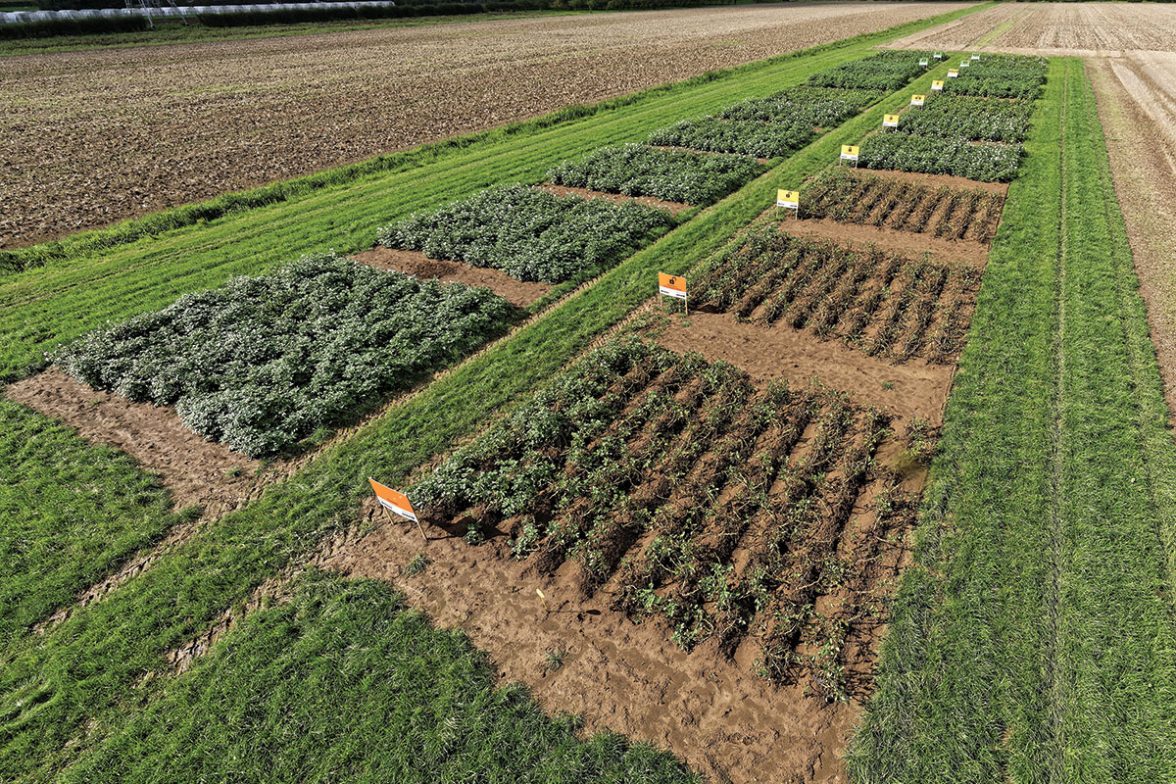 Field trial plots containing potatoes equipped with late blight resistance genes from wild species. Susceptible types are in front rows and resistant types are in the back; potatoes in left row are sprayed with fungicide and those in the right row are unsprayed. PHOTOS: WAGENINGEN UNIVERSITY AND RESEARCH CENTRE.

Scientists in the Netherlands use cisgenic modification to instil blight-resistance trait in potatoes.

Researchers from Wageningen University and Research Centre in the Netherlands have just completed a 10-year project entitled “Durable Resistance against Phytophthora through cisgenic modification” with the acronym DuRPh. Their goal was to prove that existing potato varieties can be made durably resistant to the Phytophthora infestans pathogen that causes late blight in potatoes, thereby reducing dependence on chemical fungicides to fight the disease.

The cisgenic modification technique applied in the DuRPh project is a type of genetic modification in which genes are transferred between crossable organisms. For this project, researchers extracted late blight resistance genes from wild potato species from Latin America, the ancestral home of the potato, and inserted them into well-established varieties.

The project’s results reveal that stacking multiple late blight resistance genes will allow for a substantial reduction in fungicide use. If eventually approved by government regulators and widely adopted by the industry, the researchers say the technology could be a game changer for potato producers across the globe.

In 2005, the Dutch Ministry of Economic Affairs approached Wageningen University researchers with the idea for the project. At the time, it was felt that the Netherlands might lose its competitive edge in the potato propagation business if it did not pursue research into GM technology. The Dutch government also believed that genetic modification offered the possibility to make potato production more sustainable by reducing reliance on chemical products.

Around the world, established potato varieties grown in large acreage, including Russet Burbank in the U.S., Maris Piper in the U.K., Bintje in Northern Europe and Spunta in Northern Africa, are highly susceptible to late blight. In many instances, crops need to be frequently sprayed with chemicals that inhibit the growth of the mould that causes late blight. In northwestern Europe, for example, potato crops are commonly sprayed weekly, resulting in 12 to 15 treatments per season.

Jack Vossen, a plant breeding scientist at Wageningen University, says the DuRPh project showed that stacking multiple genes allowed for an 80 per cent reduction in fungicide use, particularly when combined with smart resistance management. Not only would this help growers to save money, he says, but it could also help to restore the natural balance of the ecosystems in which the potato varieties are planted.

“Less carbon dioxide will be emitted, less soil compaction will occur and beneficial fungi will not suffer from collateral damage,” says Vossen.

Anton Haverkort, a potato expert at Wageningen University, explains the project in detail. First, he says, the researchers identified and cloned genes from wild potato species from Latin America that were crossable with commercial potatoes. The genes were then inserted into existing varieties of commercial potatoes using marker-free transformation, a type of genetic modification that uses natural genes from crossable plants only. This, essentially, is the cisgenesis process.

Cloning was done utilizing the bacterium E. coli and transformation took place by way of A. tumefaciens, another bacterium, notes Haverkort. “These are standard ‘cookbook’ procedures in laboratories around the world,” he says.

According to Haverkort, what made the DuRPh project unique was that the researchers extracted genes from wild potato species not to create new varieties, but instead to improve existing ones. On top of that, in order to make it more difficult for late blight to overcome the potato, they chose to stack three resistance genes rather than just one, he says.  “Resistance should be durable,” says Haverkort.

According to the DuRPh research team, there are currently more than 30 known resistance genes in wild potato varieties, and of those, 20 have been isolated and are now available for genetic transformation work. All of the genes identified thus far encode the same group of proteins, which helps the plant to recognize and respond to a Phytophthora infection.

Resistance should be durable.

Phytophthora is well known for its ability to quickly break down any resistance that is encoded by a single resistance gene. While experiments have shown that resistance based on stacks of genes is much more difficult for Phytophthora to break down, it’s too early to say if this approach represents a save-all solution for long-term late blight resistance, cautions Geert Kessel, senior plant pathology scientist at Wageningen University.

Potato plants were grown in a greenhouse for molecular studies to test whether the late blight resistance genes were successfully inserted, and to establish that they didn’t deviate from the original variety.

Although the research team did conduct resistance management studies, Kessel maintains these kinds of trials are ideally conducted over long periods of time. “Durability can only be measured over many, many years,” he says.

To prevent or delay resistance break down from occurring, Kessel maintains it’s important to develop a resistance management strategy. This includes low doses of fungicides but only when the stack of resistance genes is “down to its last gene,” he says. In the meantime, the researchers will continue work on replacing the nearly defeated stack with a new fully functional stack.

According to Vossen, the team at Wageningen University deliberately chose to introduce the natural resistance genes through genetic modification instead of using classical cross-breeding techniques for several reasons.

Following their successful research, the DuRPh team says it’s now up to private interests to commercialize the technology. They acknowledge that this is where it gets tricky, however.

“We see that in Europe private parties are very reluctant to go through the complicated and costly GM deregulation process,” says Vossen. “Now only multinationals like Monsanto and BASF can afford such costs.

“Even when such an investment is made, like BASF did with their GM potato variety, Fortuna, the market introduction was not successful,” he continues. BASF withdrew its Fortuna application to the European Union in 2013, citing uncertainties in the regulatory environment.

Vossen believes main reason for the public’s reluctance to embrace GM products is fear of dependence on powerful multinationals. If small stakeholders get access to techniques like cisgenesis, he thinks that a lot of that reluctance will disappear.

DuRPh scientists demonstrated their research progress to the press and public every year.

Haverkort agrees. He says it’s up to breeding and seed companies to continue their work now that they’ve proven that it works. “But companies are not likely to invest up to ¤10 million (C$15million) to register a cisgenic variety when there’s still a chance of no public acceptance,” he says. “Only when it is deregulated, as is for example mutagenesis and protoplast fusion, will businesses jump on the bandwagon.”

It’s not that there isn’t interest, though. According to Wageningen, the DuRPh program produced a well-documented case that provides a constructive discussion on the use of cigenesis in potato breeding. The researchers say that when they met with farmers and other stakeholders in the conventional potato chain during the course of the study, they showed a willingness to grow, process and market Phytophthora-resistant potatoes created by cisgenesis technology as soon as there is a viable market.

The biggest hurdle, according to Kessel, has been opposition from non-governmental organizations and activist groups such as Greenpeace and the Field Liberation Movement. Organizations like these, he says, weld great influence over public acceptance of GM technologies.

Bert Lotz, head of the applied ecology team at Wageningen University, was the lead on the communication aspect of the cisgenic modification initiative. The aim of this sub-project was to involve potato value chain stakeholders and the public by means of communication and interaction, says Lotz.

Ultimately, the hope was to provide stakeholders with relevant information about the advantages and disadvantages of the development of a cisgenic late blight resistant potato, which would help them to form an educated view on the role of cigenesis in potato production.

Lotz says that an advisory board was formed for this purpose at the start of the DuRPh project, and that it held a successful meeting with stakeholders in 2006. As research progressed, the stakeholders were provided with progress reports, articles were published in scientific literature and in the media, and debates and field visits were held. The DuRPh team also maintained a website to keep interested parties up-to-date.

The first major advantage of introduction through GM is that it is tenfold faster in development time when compared to cross-breeding.

In addition, researchers distributed information on cisgenic modification at national agricultural events and also hosted lectures on the topic. Every year, the trial fields at Wageningen were opened to the general public and several debate sessions were held during the course of the project. Over the 10-year period, Lotz says the team organized three meetings with policymakers with the Dutch ministries of Environment and Food Safety and of Economic Affairs and Agriculture.

According to the research team, the European Food Safety Authority concluded that cisgenic modification involves similar hazards as crossbred crops do, which means that adapting legislation for the adoption of cisgenesis is justifiable.

“Now it is up to brave politicians with a long-term vision beyond their own re-election date to actually start updating GM legislation,” says Vossen.