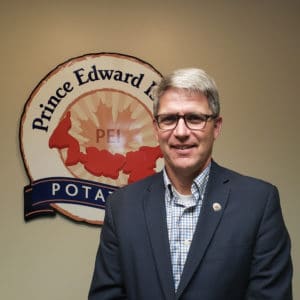 [deck]World Potato Congress president, Romain Cools, is pleased to announce Greg Donald has joined its board of directors.[deck/]

Greg Donald has been the general manager of the P.E.I. Potato Board since 2009. The P.E.I. Potato Board represents P.E.I. potato producers working together to ensure long-term profitability and sustainability through marketing, advocating, negotiation and activities that support quality potato production.
Donald has a BSc in agriculture with a major in plant protection from Dalhousie University.  He also attended the University of New Brunswick and obtained a Master’s in Business Administration.

Donald has more than twenty five years of experience in the potato industry, including five years with McCain Foods in New Brunswick in the area of agronomy, potato production, potato procurement and green crop field management. He then spent 14-plus years in progressively responsible management positions in the agricultural crop input business in Atlantic Canada and Maine with the Cavendish Group.

Cools stated:  “The World Potato Congress is pleased to welcome Greg Donald to its board. Mr. Donald brings a wealth of knowledge and experience in the potato sector and will be a great asset to the board of directors.”

The Canadian government is investing $58.6 million into making further investments to safeguard the health and safety of Canada and temporary foreign workers (TWFs)...
Read more
People

Alberta potato researcher Colby Robertson has been picked as one of the 25 Canadian Agricultural Youth Council members, Marie-Claude Bibeau, minister of agriculture and...
Read more
Industry

There is expected to be approximately 800 new positions created the Youth Employment and Skills Program for the 2020/2021 year, Marie-Claude Bibeau, minister of...
Read more

After receiving little rainfall throughout the growing season in Prince Edward Island, the situation is starting to get pretty critical in some potato fields,...
Read more
Potato Health Benefits

The health risks from glycoalkaloids, which are found in potatoes and potato products, can be reduced by peeling, boiling and frying potatoes, a study...
Read more
Tweets by SpudSmartMag