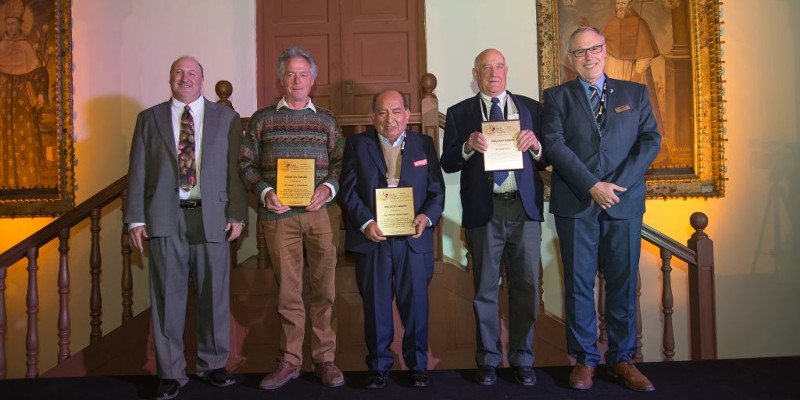 An Industry Award Ceremony was held to recognize three individuals who have devoted their life’s work to the potato industry, during the 10th World Potato Congress in Cusco, Peru.

Dr. Haverkort’s work was always aimed at bringing science to the potato industry. Many of his research papers concern problem solving in developing and developed countries. Some of the research results directly and extensively used by, and impacting the industry are the ptoato model LINTUL, used to explore repercussions of climate change; the Cool Farm Tool POTATO, which calculates the CO2 costs of potato production and suggests methods to bring it down; and the DuRPh-project, of which the Phytophthora genes are currently integrated in potato genetics projects.

Within The Netherlands’ international cooperation policy on Public Private Partnerships, he brought consortia of The Netherlands’ potato industry into contact with those of developing countries and upcoming markets to jointly carry out research and development for mutual benefit. In Ethiopia, this resulted in an investor building a potato factory. In India, he led a team of WUR scientists over four years that conducted CO2 cost analysis of potato production and worked on addressing yield gaps.

Alberto Salas has dedicated his life to finding, researching, preserving and conserving potato wild relatives. He began his studies at the National Agrarian University in Peru in 1965 graduating with a degree in agronomy in 1970. Once he graduated with his Bachelor’s degree, Salas was hired permanently by the National Agrarian University in the Potato Research Program.

In 1976, Mr. Salas began working for the International Potato Center as an associated taxonomist. His numerous collection trips for wild and cultivated species helped build the current repository of the CIP gene bank. A total of 60 percent of the current potato collection were gathered by Salas. To date, Mr. Salas helped to discover between 20-30 new species and native varieties.

Throughout his time at the International Potato Center, Mr. Salas has worked as a tireless advocate for expanding the body of work on potato research through mentorships, guidance, and training of countless students, researchers, and staff.

While the wild relatives of the domesticated potato may not grace the family table, they could hold the key to help secure potato production for future generations. Hidden in their morphing DNA might be the key to creating modern potato varieties with built-in resistance to such farming challenges as pests, disease, severe weather, and prolonged drought.

Over the past 50+ years, Salas calculates he’s taken over 300 trips to collect thousands of potato and wild relative specimens and continues to search altitudes where most gasp for breath.

Through his trips, he has helped to significantly advance the understanding of plant evolution while providing a window into the past that future generations can access to develop improved potato varieties adapted to the changing climatic conditions.

Dr. Gary Secor has been a Professor in the Department of Plant Pathology at North Dakota State University since 1990. He received his Bachelor’s and Master’s Degrees from Montana State University, and his PhD from the University of California-Davis.

Dr. Secor has been an asset to the potato industry since 1971. His professional career has been devoted to research and education for and with the potato industry. He is recognized nationally and internationally for his research on diseases of potato, but is also recognized for his ability to explain technical information in a clear and understandable manner and in a style that is understood by audiences with all levels of education. Dr. Secor is simply an excellent communicator.

Dr. Secor began his career as Director of the first potato virus testing lab. During his career he has published information on numerous potato diseases that have had a huge impact on the industry. He has discovered several new diseases, including zebra chip. He has authored over 91 publications and 12 book chapters, and delivered over 300 national presentations and 100 international presentations in 21 countries. He has established a long term potato project with the potato industry of Chile and was awarded the Economic Development Award from the National Potato Association of Chile in 2017.