When a pre-harvest hard frost hits — a temperature of -2.22 C or below — growers are faced with some thorny challenges. While a light frost may only damage the tubers in the top part of the hill, a severe frost can take out much more. There has been early frost three out of the last 10 years in the Maritimes, and outof those incidents, last year was the worst for frost-damaged potatoes in the region, says Khalil Al-Mughrabi, a pathologist at the Potato Development Centre of New Brunswick’s Department of Agriculture, Aquaculture and Fisheries, and an adjunct professor at Dalhousie University. 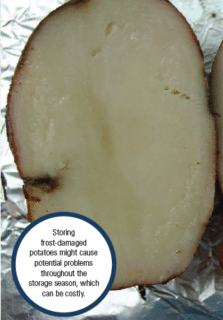 To prevent this situation, growers should consider harvesting tubers before severe frost is likely, preferably when the tuber pulp temperature is above 7 C, he says. Growers should also ensure hilling is properly formed to help protect tubers from freezing temperatures.

Additionally, growers should keep an eye on weather conditions and forecasts in their regions. “Here in New Brunswick, we have a harvest advisory program that runs between the middle of September until the middle of October,” Al-Mughrabi says. “In addition to providing growers with weather forecasts that help them decide when to harvest, this program gives growers soil temperature and moisture at a depth of six inches, tuber pulp temperature and current air temperature.”

If a hard frost does hit before your harvest, do not disturb tubers until they have warmed completely. Waiting a few days to harvest is a good practice to follow in identifying any damaged tubers, says Al-Mughrabi. At that point, crews can cull potatoes that have blackened or started to rot. Growers may need extra people on the harvester or bin loader to remove as many visibly-frosted or rotted tubers as possible, and that harvest should be stopped if there is wet weather, he adds.

If a hard frost does hit before your harvest, do not disturb tubers until they have warmed completely.
Click To Tweet

Tubers should be handled carefully to minimize bruising, as infections can occur through wounds. Also remove as much soil and debris as possible, as this will only restrict airflow in storage, which leads to hot spots and tuber breakdown, says Al-Mughrabi.

Removing visibly-frosted potatoes before storage is a much better approach than trying to deal with them in storage.

“Potatoes that have the potential not to store well should be sold or processed as quickly as possible,” says Al-Mughrabi. “Storing such potatoes might cause potential problems throughout the storage season, which can be costly. If a grower suspects that potatoes in an area of the field (usually lower areas in the field accumulate more moisture and more potential for frost damage) were exposed to frost damage, that area should be flagged and harvested last. These tubers can either be disposed of, or if they are still marketable, can be sold or processed immediately after harvest.”

Waiting a few days to harvest is a good practice to follow in identifying any damaged tubers. At that point, crews can cull potatoes that have blackened or started to rot.
Click To Tweet

The first thing to do is closely inspect each damaged tuber intended for storage. Al-Mughrabi recommends growers avoid storing any potatoes with more than five per cent rot. This includes frost damage as well as other storage diseases such as soft rot and dry rot combined (including late blight and pink rot). Potato piles with more than five per cent rot or frost-related breakdown require more work to dry and prevent subsequent moisture-related breakdowns within the pile.

Al-Mughrabi says if frosted potatoes were missed during the grading process while loading into storage, distributing these tubers on top of the pile may help them dry faster and prevent the potential for hot spots. In addition, do not overfill storages.

“Overfilling the storage hampers air flow and increases the chances of tuber breakdown due to rot,” he adds. “There should be at least 0.6 m (2 feet) between the top of the pile and the storage ceiling. This will allow proper air circulation and drying of the pile.”

From there, maintaining the best potato quality during storage is a matter of adjusting the environment, and the three main factors are temperature, humidity and air movement. “Minimize the potential for soft rot by drying the tubers as quickly as possible,” says Al-Mughrabi. “Continuous air movement (minimum 2 cfm/barrel or 1.2 cfm/cwt) for the first 30 days may be necessary to heal wounds of the rest of the potatoes. Frozen potato tissue is no longer viable and cannot be healed.” 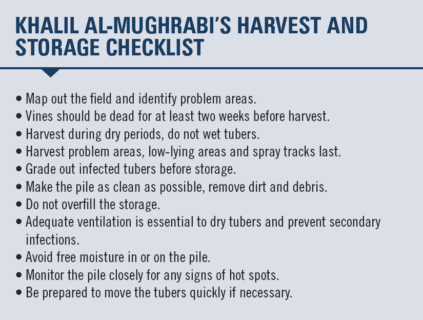