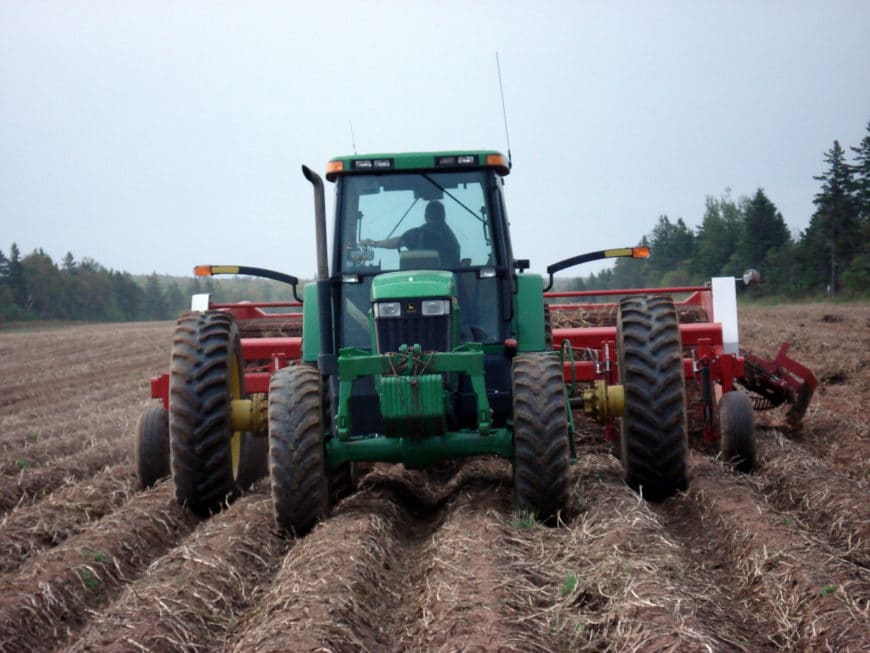 The United Potato Growers of Canada (UPGC) has released its most recent Canadian Potato Crop Report.

The weather was dry and hot well into the summer this year until the province finally got rain in the last week of August. In contrast to last year, the western part of P.E.I. has had good moisture all along. The Summerside area had 90 mm of rain a week ago, and then Hurricane Dorian brought another 110 mm for a total of 200 mm in ten days. The soils seem to have been able to absorb the water, however hurricane force winds in excess of 100 km/hr have created some leaf and stem damage. Chip varieties seem to have been more susceptible. The eastern part of the province only received 15 mm while the Charlottetown area received 48 mm from the hurricane path.

Dig samples show yields ahead of last year, with a big gain in the last week (40+ cwt), however, the crop still needs three weeks of growth without further rain or early frost to make accurate predictions. At this time, there is good potential for an average crop. Some growers report a heavier set this year, which has been slowing the sizing of the tubers.

The early fresh harvest has been light with reported yields down 50 cwt/acre. Fresh shipments are ahead of a year ago with most volume destined for local and regional markets. Fresh prices are similar to last year, around $3.10/10lb. fob P.E.I. Chip volume is moving into the valley plant and early processing contracts are being delivered to the Cavendish Farms French fry plant.

Although a smaller potato producer, the province was also pummelled by Hurricane Dorian. Heavy rains created erosion and washouts in fields. High winds were the more significant issue for other crop growers driving apples and other fruit to the ground. Buildings and other infrastructure were badly damaged in addition to the loss of electricity for several days.

Yields look good, but variable, based on the usual growing season differences within the province from north to south. Digs on Goldrush are approaching the 260 cwt mark as they begin to wind down. Growers were reminded of things to come on September 10 as Environment Canada reported temperatures at the Edmundston weather station dipping to -1.3 C.

Early fresh harvest, particularly in the southern part of the province continues. Fall contracts for early processing are being delivered to local processing plants and also to fry plants outside the province.

After experiencing a hot, dry summer, the province has received timely rains in the southern part with good size and yields expected in the Joliette area. In the north, temperatures have cooled off in the Lac-St. Jean area allowing good bulking conditions. At this time, the overall crop in Quebec is looking really good with some digs currently reaching 400 hundred weight. The Joliette area has yield potential over 400 cwt on colored varieties – just depends on the date of first killing frost. Size profile is also large this year with some lots in the south approaching 60 per cent jumbos. Main harvest should begin in 10 days.

The Quebec Board recommended price is at $3.50/10lb. which is very similar to last year. Retail chain stores have been able to absorb the cost on front page ads for fresh potato promotions, unlike some other years where it was on the backs of the growers. Producers selling to the lower priced wholesale market are not a factor this year as evidenced by strong prices. Growers without storage who are currently in the market do not anticipate any problem cleaning up given good domestic demand and average export markets.

The Ontario crop is getting close to maturity with many fields destined for storage already topkilled. There had been an outbreak of late blight earlier in the season, but industry officials felt it had been brought under control in the affected area with no spread to other fields. Both early table and out of field chip harvest have been ongoing for some time. Quality has been very good in both sectors, although the yield has been variable and seems a bit more favorable in the chip than the early fresh fields. Due to the wet spring, a limited amount of early table potatoes was able to get planted so they should be cleaned up in advance of storage potatoes. Prices are good with recommended prices at $3.40/10lb. Weather permitting, a few growers will start going to storage this week, but most will begin the week of September 16.

Harvest out of field has been going for a while with good yields. Rangers have been yielding anywhere from 300-450 sacks/acre. There have been reports of a half circle of Ivory Russets yielding almost 500 bags/acre. There was a little bit of crop dug into storage last week, but most producers are waiting for improvement in specific gravity before continuing.

Growers are nervously looking at the sky as rain that was much needed six weeks ago is starting to fall in the last couple of days. Growers in Manitoba like to be done harvesting their potato crop by October 1, to prevent a recurrence of last year’s unfortunate harvest situation which saw a shortfall of 3,500,000 hundred weight on processing contracts. The short pipeline created a need to run new crop for two days on August 6 and 7 to blend with old crop before the plants went down for scheduled maintenance at season’s end. There has been a frost already on September 8, but seemed to do more damage to other crops than actually stopping potato growth. The new Simplot plant expansion is on target for end of January.

The table crop in the southern area of the province has been later in development, due to dryness in the growing season. Yields will likely be off a bit; however, producers have started topkilling in order to get their crop under cover in time. Quality looks good.

Like in Manitoba, rain that could have been used earlier on in the season is now beginning to fall, with an inch on the ground in the last day or so. Early digs on varieties like Umatilla’s, point to a season that was too dry and cool. Today’s yield estimates on the processing crop would be a five-year average. Processors are working with growers affected by the hail damage earlier on in the season to try and salvage as much crop as possible. Plants have moved around their line commitments for wedge size finished sku’s, but the challenge is always to utilize lower gravity raw to make acceptable finished product specs. The processing crop really would like another week of growth, but it may run out of calendar time. Alberta growers would like to see their potato harvest wrapped up by October 5. The new Cavendish Farms processing plant has been running since mid-August and will ramp up production as they overcome the challenges of bringing a new plant online.

The seed area in the northern part of the province has been challenged this season with excessive rain and an overall lack of heat units. This sector is ready for harvest as well.

The growing season has been good in B.C., providing good size tubers and consistent stands. Yields are projected to be above average. Harvesting has been ongoing in the province for quite some time feeding the market with good demand and good pricing. Prices are about the same as last year with some strengthening on yellows and slightly lower on reds. Most fields have been topkilled, and now that temperatures have come down, storage has begun. B.C. growers would like to see their harvest completed by October 1. About a quarter of the crop has been dug to date.

The above information was sourced from a UPGC Board of Directors meeting on September 10, 2019.
Thank you to the directors of UPGC for their input on this report.
Good luck to all Canadian Potato Growers with your harvest.