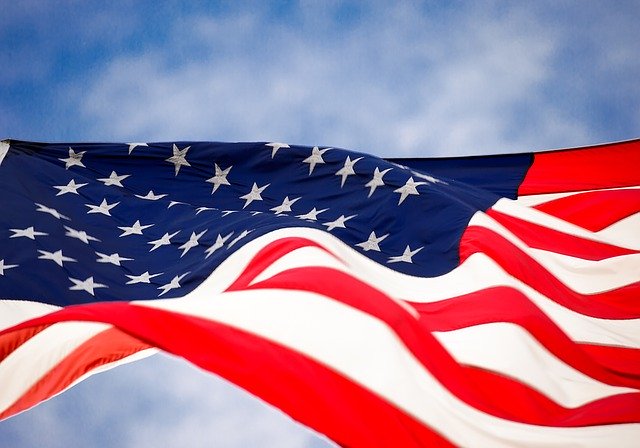 Many areas of the United States were affected by adverse harvesting conditions this year. The total US Potato Crop is estimated to be down 27,569,000 hundred weight below the 2018 crop (although fewer reporting states in 2019). A more objective comparison for Canadian producers is the total fall crop which compares to most of the potato crop grown in Canada. USDA estimates the fall potato crop to be down 12,401,000 cwt. or 3%. This is one of the lowest crops on record.

NASS estimates that production for the largest player in the country, will be down 7.8 million hundred weight or 5.5%. NASS has moved yields downwards from 450 cwt./acre in 2018 to a projected 435 cwt./acre for this crop. Surveys conducted by private grower organizations estimates the yield closer to 427 cwt./acre which would further reduce the available pile. Yields were off throughout the growing season but severely affected by a deep freeze on October 8 when 15-20% of the crop had yet to be harvested.

The second largest growing state is a consistent producer, up +0.7% for the 2019 crop. Most production is destined for processing, with fewer acres planted for fresh in the last few years. NASS estimates 2019 yields to be down to 615 cwt./acre from 630 cwt./acre one year ago.

According to USDA, the neighboring state of Oregon showed the biggest decrease in production – down 4,140,000 hundred weight or -15.3%. These estimates are difficult to understand, given the fact that fewer early season potatoes (and lower yielding ones) were grown. However, USDA based the estimates on yield reductions of 60 cwt./acre, down from 600 to 540 hundred weight per acre.

Although industry continues to have issues with the data, Wisconsin has moved closer to a normal year, after last year’s disaster in 2018, due to excessive rainfall. NASS reports production is up +6.8% or 1,845,000 cwt. above the previous year. In comparison to last year, most of the crop with the exception of 800 acres, was harvested. Growers point to a lower yield with unfilled storages, however NASS reports yield moving from 405 to 420 hundred weight per acre.

North Dakota’s production is estimated to be down 11.8% or 2,790,000 hundred weight this year. Wet conditions resulted in 14,000 acres not being harvested with the area from Grand Forks south, being particularly hard hit. Acreage reductions of 1,500 acres in the spring, down to 73,000 acres in the state, had already set a record for the lowest number of planted potato acres since 1951.

Northwestern Minnesota was also severely affected by heavy rains at harvest and production is estimated to be down by 3.6% for the 2019 crop. There were some areas in the Red River Valley that were only able to harvest 50% of their crop this year.

Estimated production in Colorado is down 9.5% or 2,056,000 hundred weight. Planted acreage was down 4,000 acres as producers switched to growing other crops this spring. Observers had felt the yield would be down as well, however the drop for the all fresh producing state, was perhaps larger than expected.

Maine, the ninth highest potato producing state, appears to have had a decent crop with USDA estimating production up 9.6% due to increased yields and also an increase of 3,000 planted acres in the spring. 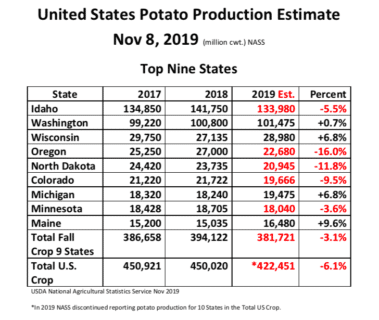 Canada Potato Production Estimates will be reported on December 6, 2019.