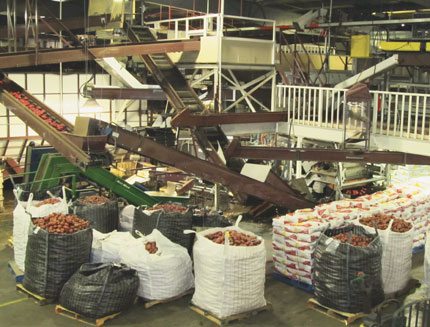 Haskett Growers is in the business of growing potatoes, but the family operation also grows future farmers. Over the years, Larry Thiessen and his brothers, Harold and Marvin, have been grooming the next generation to take over the farm, located near the community of Haskett, south of Winkler, Man. Recently, Haskett Growers created a succession plan that includes four next-generation family members.

“We’re trying to provide a future on the farm for the next generation,” says Thiessen, president of Haskett Growers. “This will be the fourth generation on the family farm.”

In 1978, Thiessen’s father, who grew grains and sugar beets, had an opportunity to buy into Haskett Growers, recalls Thiessen. “Three families owned Haskett Growers at that time. We bought out one of the families. The following year we bought out the second family. And a few years later, we split with the third family. The Thiessen family then became Haskett Growers,” he says.

The family operation grew from there. In 1996, the sugar beet industry in Manitoba ended, leaving a substantial hole in the farming operation. Haskett Growers decided to purchase a nearby seed potato farm.

In addition to spuds, Haskett Growers also grows about 5,000 acres of other crops such as corn, wheat, edible beans, soybeans and canola. To achieve a balanced potato rotation, they trade acres with neighbours. With an eye to the future, Haskett Growers recently expanded into another area of Manitoba with the purchase of a 1,000-acre irrigation farm near Treherne.

Over the years, Thiessen has seen many changes in the potato industry. Some of these changes include the number and size of farms. “Farm size has increased, and there’s probably about half the potato growers there was 25 years ago,” he notes.

Thiessen has also seen an increase in paperwork surrounding food safety regulations. “You used to plant it, harvest it, and ship it—and that was it,” he says. “Now you have all the paper trail for traceability.”

While consumers are demanding increased traceability, they also want better quality products. “The demand for quality has increased. Whatever you deliver has to be really good or they’ll send it back,” says Thiessen. This is partly because companies are always looking for an advantage over their competition, he says, so if they can produce better quality products they feel this gives them an edge in the marketplace.

Despite less than ideal planting conditions this season, Thiessen is optimistic about this year’s potato crop. He expects yields to be down slightly because of the late seeding, but he says this should create a strong market and better pricing.