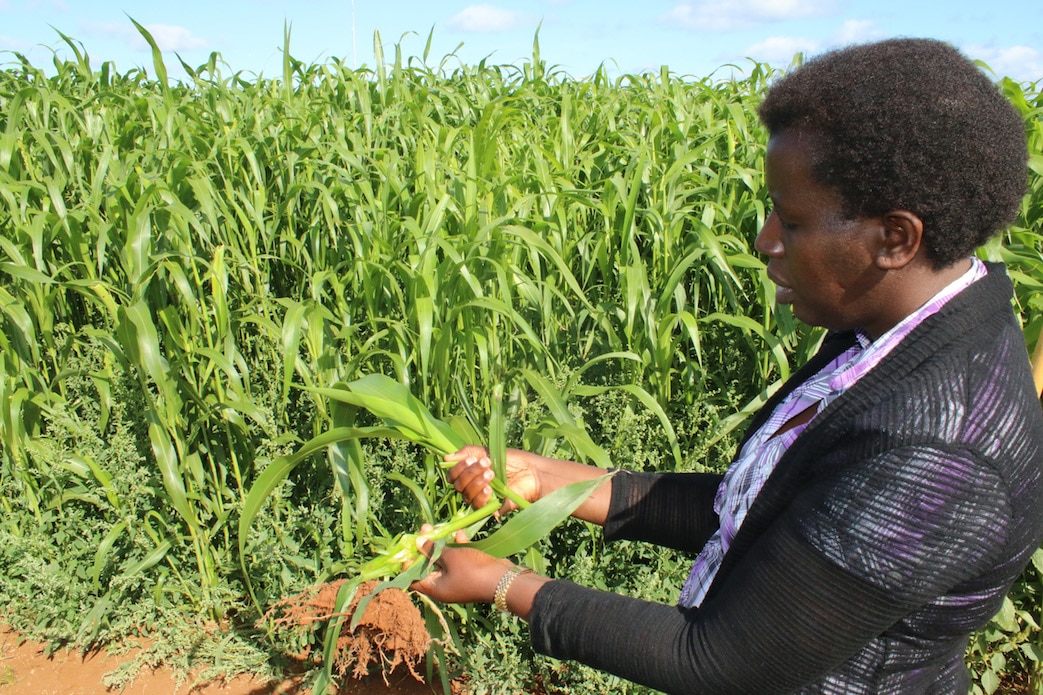 AAFC’s Dr. Judith Nyiraneza and a team of researchers are closely examining sorghum-sudangrass as part of a larger cross-country study focused on enhancing the productivity and sustainability of Canadian potato production. (Photo AAFC)

Already grown by some potato farmers in P.E.I., the use of this multi-benefit crop may increase in years to come.

The ideal potato rotation crop is one that offers more than one agronomic benefit and also has a positive effect on potato yields. An exciting rotation option with great potential on both these fronts is now being investigated in a second in-depth study in P.E.I.

According to Nyianeza, sorghum-sudangrass is a strong soil builder because it breaks down slowly and is therefore very effective at holding onto nutrients. “In addition, sorghum has bio-fumigant properties that can help control soil-borne diseases and nematodes,” she says. “It’s relatively new in P.E.I. with only a few farmers growing it, but it’s very important that we evaluate it for its capacity to build up the level of soil organic matter. This is desperately needed.”

Nyiraneza notes that in the U.S., sorghum-sudangrass has already been shown to increase irrigated potato yield and quality.

In Canada, sorghum is grown in every province, notes Dr. Om Dangi, a scientist at Agriculture Environmental Renewal Canada (AERC) Inc., an Ottawa-based hybrid seed company specializing in the development of sorghum and pearl millet hybrids for the climate of Canada and similar countries. AERC breeders have been developing varieties of sorghum-sudangrass for more than 20 years, says Dangi, and it can be a suitable rotation crop for many potato growers.

AERC tests both grain sorghum and forage sorghum. While prussic acid (hydrogen cyanide, the compound in sorghum that supresses nematodes and verticillium) may be toxic to cattle, Nyiraneza notes that AERC has developed a sorghum-sudangrass hybrid with lower prussic acid that can be planted as a forage and grazed safely.

Results of an in-depth study involving sorghum-sudangrass at Harrington Research Farm (part of AAFC Charlottetown) were recently made public and a second study is underway. In the first study, started in 2006, there were four three-year rotations compared: barley and sorghum-sudangrass, barley and canola (not grown for seed production but plowed under as green manure), barley and red clover (the most common rotation in P.E.I.) and continuous potato.

Potatoes were grown in 2006, 2009, 2012 and 2013. In two of these four years, potato yield increased following sorghum-sudangrass in the range of 20 to 30 per cent in comparison with the red clover rotation. The team did not expect this.

“We thought that red clover would result in higher yield as the soil disturbance is less frequent under red clover,” says Nyiraneza. “We do not think the potato yield boost was related to nutrients released by sorghum-sudangrass breakdown, but to other factors, which might include improved physical properties that allow better soil tilth, increase the soil-seed contact, better aeration and better moisture content, positively impacting root architecture and the crop performance. Of these, we think the yield boost was due to a combination of improved soil physical properties and also disease suppression, all caused by the presence of sorghum-sudangrass the year before.”

Yields were statistically comparable among the rotations during 2006, year of establishment, and in 2012, which had warmer-than-normal temperatures after July until harvest, with precipitation two-fold to three-fold lower than normal in June and July.

The team also measured changes in soil carbon and nitrogen, but there were no significant differences among the rotations. “However, the sorghum-sudangrass was incorporated immediately after cutting to increase its biofumigant properties, so we were not aiming to see significant carbon input,” says Nyiraneza. “However, in our current study, we are aiming to maximize the residue returned to the soil by cutting the plants when they reach about four to five feet to give them the opportunity to regrow and enhance their root growth, returning more carbon to the soil. So, how much carbon can be returned to the soil with sorghum-sudangrass varies according to how it’s managed.”

“The study is a little bit more complex with an overall goal to increase potato yield and quality while building the soil organic matter,” Nyiraneza notes. “Due to the encouraging results of the six-year study, we wanted to better understand the benefits of growing sorghum-sudangrass through multiples angles. We’re looking at its economic benefit (Khakbazan), its role in affecting soil biology (Noronha and Mills), its capacity to mitigate nitrate leaching (Jiang) and its impact on potato yield and quality and on soil properties (Nyiraneza and Rodd).”

Three rotations systems are involved: sorghum-sudangrass, brown mustard (Nyiraneza notes that brown mustard is being grown in P.E.I. for its potential to control wireworm) and red clover. Additionally, the effect of irrigation will be tested.

While Khakbazan will provide insight into the costs of growing sorghum-sudangrass and its market value compared to other rotational options such as clover and canola, Nyiraneza is firm.

“To enhance and to protect our precious soil resource, we cannot look only at the crop market value,” she says. “Prince Edward Island has established a mandatory three-year potato rotation with two common cash crops (potato and barley) and one year of forage. Although some growers who do not have cattle sell red clover forage, many understand that doing this contributes to the depletion of nutrients in their soil, and they leave the clover residues on the field.

“Growers are coming to understand that they need to completely sacrifice at least one growing season every three years to build the soil organic matter and this is a common practice in P.E.I.,” she adds. “Some of them may have longer rotations, with potatoes two out of five years. The soil needs a chance to rest and be restored.”

Preliminary results of the current study will be available in winter 2018.