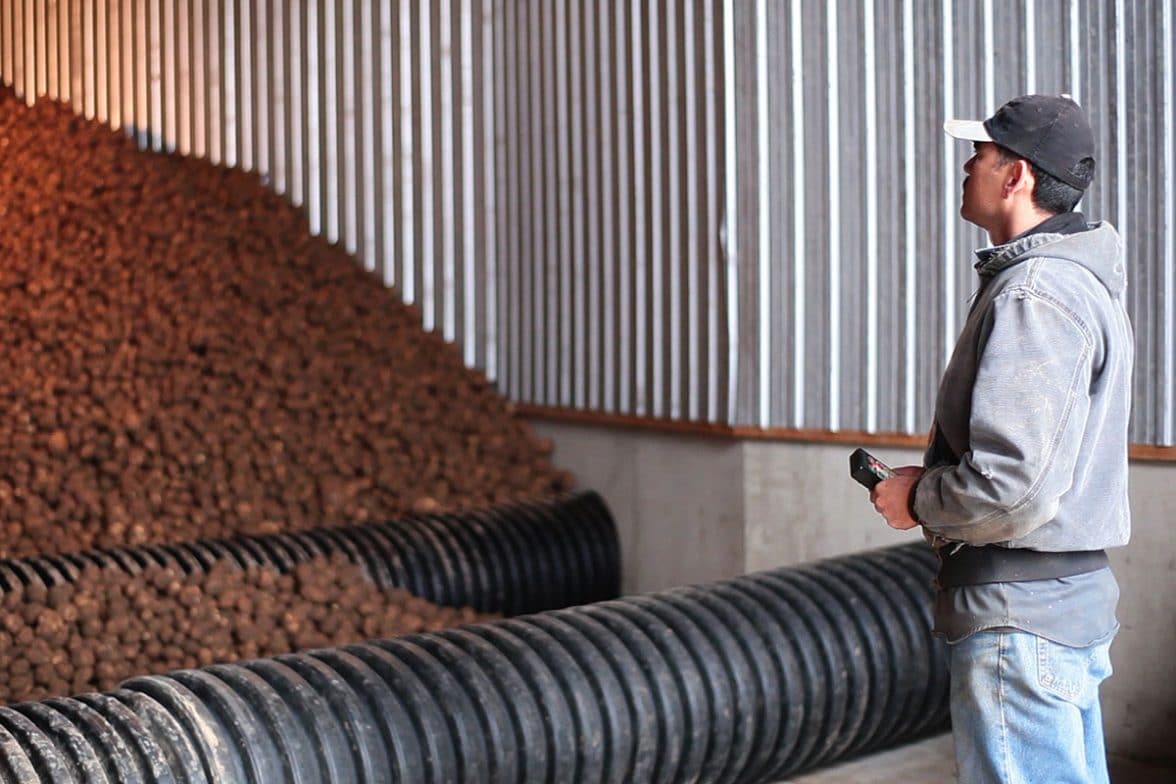 By Julie Deering and Mark Halsall on January 7, 2016

Knowing the specific storage needs of the different types and varieties of potatoes they grow is one way potato producers can ensure they get the most out of their crop.

While some outside the industry may consider a potato grower’s work to be done after harvest, producers know that’s only the first half of the job.

Properly storing potatoes and understanding the various storage requirements for tablestock and processing potatoes and the varieties within those sectors is paramount for success, and also for maintaining a competitive edge in securing customers and meeting contract obligations.

Robert Coffin, the noted Canadian potato researcher and breeder based in Prince Edward Island, says millions of kilograms of potatoes are needlessly lost each year due to storage issues.

He points out the average potato tuber is about 80 per cent water and 20 per cent dry matter, comprising starch, minerals, vitamins, sugar and protein. “This is a very nutritious substrate for microbial growth,” he says. “Potatoes are ‘alive’ and need specific storage regimes to assure long life and high quality.”

Coffin estimates that to grow and store an acre of potatoes and maintain equipment costs an average of $3,000 per acre. He says to properly store potatoes, no matter the variety, growers first must understand the fundamentals — physiology of potato tubers, airflow volume, air speed and the concentration of carbon dioxide and relative humidity.

Potatoes in storage being moved by forklift at Sunrise Potato.

“Once harvested, you really have to pamper those potatoes in storage,” says Coffin, who worked for Cavendish Farms for 19 years as a potato storage specialist.

Bert Tupling agrees. He’s a fresh market potato producer near Shelburne, Ont., and says the consequences of failing to manage potatoes properly in storage can be severe.

“A five-million-pound bin of potatoes can deteriorate to the point of having no market within a matter of two weeks,” Tupling says. “If you don’t pay attention to the quality of potatoes that went into the bin or have the wrong temperature or humidity setting, it doesn’t take long for a pile 18-feet deep to decay to 10 feet.”

Peter VanderZaag is one of Canada’s leading potato scientists and owner of Sunrise Potato, which produces and stores chip stock potatoes in Alliston, Ont. He is a firm believer that storing potatoes successfully is both an art and a science.

“The art is the growing and storing techniques and methods passed down from generation to generation, and the science is in what we learn from our own research, experts and the scientific literature,” he says.

Every type of potato has qualities that meet specific market needs — be it the fresh market, french fry or chip stock, Tupling says. He stresses the importance of fresh market growers selecting the varieties that best meet their customer needs, and then storing them correctly according to each variety’s management profile.

“Once you know what variety best meets the needs of your market, you must then learn how to store those potatoes in an environment that will result in the most desirable product — not the other way around,” Tupling says.

Tupling grows 15 different varieties of potatoes for the fresh market such as yellow flesh, white rounds and long whites, including russets. He also produces Yukon Gold potatoes to help satisfy the strong demand for this variety in the Toronto market.

Yukon Gold potatoes can be difficult to store and bring to market and keep a firm, solid potato, Tupling says, noting that the tubers can become easily pressure bruised, leaving indentations and a black colour. Special care must be made in storage and handling as result, he adds.

Tupling has learned that Innovator potatoes store well into March and April. That’s why he plants up to 15 per cent of his acreage with this variety.

Thirty per cent of Tupling’s crop is comprised of CalWhite potatoes, which are well suited for boiling and for making fries. The problem is that they don’t store that well past Christmas, Tupling says.

VanderZaag produces potatoes for the chipping market, growing Dakota Pearls and Lamokas as well as Frito-Lay varieties and a number of his own varieties.

He says that it’s essential for chip stock growers to avoid high sugar content, bruising and other defects in their product, which can cause discolouration in potato chips. To do this, they need to manage storage conditions wisely in order to maintain very constant temperatures, high levels of humidity and safe CO2 levels for potatoes.

“For chipping potatoes, you really need to watch the sugar level in the tubers,” says VanderZaag. “You need to do frequent sugar analysis for sucrose and glucose, and you have to match the temperatures, humidity and CO2 levels accordingly to manage that sugar level.”

VanderZaag says a good computerized ventilation system will ensure tmperature, humidity and CO2 levels are all properly monitored and managed. This will help prevent the starch in the tubers from turning into sugar, and also help reduce pressure bruising and other forms of trouble like soft rot developing in the pile.

One of the key things for keeping sugar levels down is bringing down the long-term temperature setting in the storage shed at a very slow and steady pace. “You have to go from warm to cool very, very carefully, very gently. There can be no shocks,” says VanderZaag, explaining that shocks to potato tubers like a sudden temperature drop increase the rate of starch-to-sugar conversion.

He adds that ensuring carbon dioxide levels in the shed don’t exceed 4,000 parts per million is another key consideration for keeping a lid on tuber sugar content.

“CO2 levels have to be controlled. If they get too high, the potatoes can’t breath properly and they get uncomfortable and again starch turns into sugar,” VanderZaag explains. He says it’s important to flush out excess carbon dioxide, ”especially in the dead of winter when it’s really cold. Often you don’t bring in enough fresh air, and that’s when the CO2 levels build up.”

According to VanderZaag, correct humidification and temperature control are critical to avoid pressure bruising.

“It is important to keep that humidity as close to 100 per cent as possible … [and] the relative difference between the tuber temperature and the air temperature should be less than half a degree Celsius at all times,” he says.

“When you have ventilated air that is much cooler and drier (the water holding capacity of air decreases with lower temperatures) passing by the warmer tubers in the pile, you are sucking the water out of the tubers and you have pressure bruising and your potatoes are no longer marketable, especially later on in the season.”

Chip stock potatoes are generally stored at higher temperatures than fresh or french fry potato varieties. Traditionally, 10 C was the standard but some newer varieties can be stored at temperatures as low as or 7 C or 6 C, VanderZaag says. “The long-term holding temperature varies depending on the variety and when you wish to ship it also,” he adds.

Because chipping potatoes are stored at slightly warmer temperatures, the physiological aging process of the tubers occurs more quickly, which in turn increases the likelihood of more potatoes with high sugar content.

“That’s our problem — how do you keep them long term and not have them age and become senile? When potatoes get too old, they will also turn starch back to sugar,” says VanderZaag, adding that part of the solution lies with appropriate variety selection.

“You have to know the variety, and you have to address the whole issue of how long do I want to keep this variety in storage,” he says. “I would say the two most popular [chip stock] varieties today in Ontario that are available to anybody are Dakota Pearl for short-term storage and Lamoka for long-term storage.”

VanderZaag says his Dakota Pearl potatoes “may last into April, but generally they won’t last that long. The starch will turn into sugar because of old age.”

There are Frito-Lay varieties that last until June in storage, he notes, adding that the Lamoka variety potatoes that he grew in 2015 lasted even longer than that.

“It’s probably the newest and most promising variety out there for [long-term] storage, and the reason is that its sugar levels stay low and it seems to be able to do it for a long time. This year we stored them into July, no problem,” he notes.

“The biochemistry of the potato is different so the starch doesn’t revert back to sugar with old age, and part of that is related to dormancy. Dakota Pearl has shorter dormancy, Lamoka has longer term dormancy.”

WHERE ON THE WEB: An excellent resource for variety-specific storage management recommendations can be found University of Idaho’s Kimberley Research and Extension Center website: extension.uidaho.edu/kimberly/2013/04/variety-storage-management/.