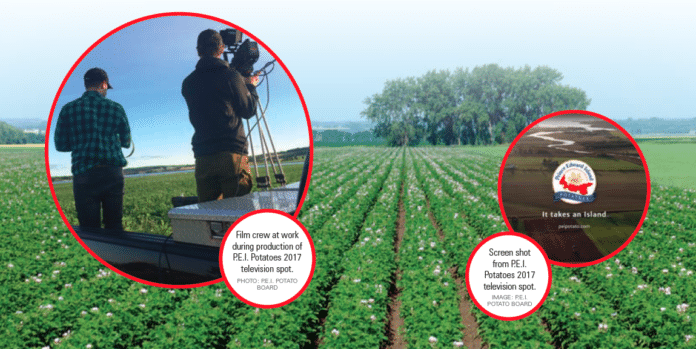 [deck]Potato marketers in Canada have stepped up their efforts to convince consumers to eat more spuds. Thanks to innovative media campaigns by P.E.I. Potatoes and Manitoba’s Peak of the Market, more Canadians are paying attention.[/deck]

P.E.I. POTATOES HAS established a strong reputation as a leader in marketing and promoting potatoes, both within Canada and abroad. It has now come out with a new media campaign that relies heavily on the Island’s beauty and rich potato heritage to further entrench the Prince Edward Island Potatoes brand in the minds of consumers.

The new television and online marketing campaign kicked off in November with a 30-second video called “What Does It Take?”

It builds on the success of the “It Takes an Island” campaign rolled out in 2017, which featured two TV ads (a one-minute spot and a 30-second spot) that appeared in Prince Edward Island and elsewhere in the Maritimes as well as Ontario. The videos were also promoted heavily on P.E.I. Potatoes’ Facebook page and YouTube channel.

“Our [2017] campaign in total garnered about four and a half million impressions, and based on our very small media budget, we were blown away,” says Kendra Mills, marketing director for P.E.I. Potatoes.

“The positive nature of the feedback that we got from consumers was beyond expectations … we’re kind of expecting that again to be honest with you.”

Mills says the “It Takes an Island” spot that was the focal point of P.E.I. Potatoes large-scale media campaign in 2017 was the first time her organization ventured into television advertising.

“Online and social media and those kinds of things, they are such an important part of a media campaign, but at the end of the day television really is the number one way to reach mass audiences,” says Mills.

“We also felt we have a really great visual brand … and we wanted to make the most use of that.”

All of the videos, which are aimed at boosting brand awareness of P.E.I. Potatoes, rely strongly on the picturesque qualities of Prince Edward Island, with beauty shots of potato farming playing a central role.

“P.E.I. is a beautiful place with clean water and air and all the things that people love the Island for … and we’re growing a healthy product in amongst all of that. So we really see place of origin as being a key part of our marketing strategy,” says Mills.

The 2018 video basically uses the same script, but relies on different imagery. “We had so much beautiful footage that we wanted to recut it again,” Mills says.

She adds the new television spot is running only in Prince Edward Island this time around due to budget considerations. Consumers in Ontario and the rest of the Maritimes can see the video via Facebook and YouTube once potatoes from the Island’s 2018 crop begin hitting the store shelves.

“We only air on TV locally because we basically can reach all of P.E.I. with a few stations,” she says. “Everything else is based on affordability, and is online.”

Mills says her organization relies heavily on farmers not only to appear in videos and other marketing materials, but also to spread the message about the goodness of the Island’s potatoes.

P.E.I. is a beautiful place with clean water and air and all the things that people love the Island for … and we’re growing a healthy product in amongst all of that. So we really see place of origin as being a key…
Click To Tweet

With more growers, especially younger farmers, posting great pictures and becoming adept in social media, she says, this has become a big part of the storytelling about potatoes.

“I get so excited about it because it’s the most genuine, authentic way of telling the story,” says Mills. “There’s nothing fabricated, there’s nothing fake about it. It’s the real thing, and I think that really shines through in any food marketing.”

Peak of the Market, Manitoba’s farmer-owned fresh produce marketing board, also scored a major marketing success recently with a campaign that had a lot of Manitobans asking: “What exactly is a Potahto?”

“We were looking for a way of reintroducing the potato and having some fun with it, and we met with an advertising agency called Think Shift,” says Larry McIntosh, president and CEO of Peak of the Market. “They came to us with the ‘Potahto’ proposal, and we were unanimous in thinking that was a fantastic idea.”

The new potato marketing strategy was a take on the “tomato, tomahto” saying, and it revolved around a new superfood called the “Potahto,” which Peak of the Market hoped would pique the interest of consumers. The campaign kick-off in September 2017 featured a four-minute mockumentary on the Potahto as well as a billboard blitz in Winnipeg.

McIntosh says social media was the main thrust of the campaign, which provided a nice fit for a key demographic sought out by Peak of the Market — the millennial generation. Humour was also used extensively as a marketing tool.

“During the campaign, 80 per cent of what we did in social media was about providing fun, interesting and useful facts, and really only about 20 per cent was about branding. It was more about having some fun with it and poking some fun at the potato,” McIntosh says.

It was all about a stand-alone campaign brought to you by ‘The Potahto Lovers of Manitoba.’ We wanted people to say, ‘Hey, what’s this about, what’s that on the billboard, what’s that on social media?
Click To Tweet

Bryce Loewen is a 30-year-old potato farmer who works at his family’s farm called Garden Valley Vegetable Growers inWinkler, Man. Loewen says he liked how the Potahto campaign spread its message primarily through social media, and he can appreciate how this resonates so well with millennials.

“I like that they’re targeting a younger demographic, hopefully someone who in the next five to 10 years is going to take up more of the buying power in our economy,” he says.

“I believe that in order for potato producers to stay relevant, marketing is just as important as our sales team,” Loewen adds. “And I do think [the Potahto campaign] was a positive step towards having a multi-pronged approach in selling our Manitoba potatoes.”

The Potahto campaign was largely successful in getting many people to rediscover potatoes. “It was very effective,” says McIntosh.

The campaign continued in 2019 with a week-long celebration of potatoes called Potahto Week from Feb. 23 to Mar. 3.

McIntosh says the first edition of Potahto Week in February 2018 saw 50 restaurants around Winnipeg add new, innovative dishes featuring potatoes to their menus. This year’s event made an even bigger splash.

“Potahto Week 2019 was a huge success with 86 Winnipeg restaurants participating. I was truly amazed at the creativity that the chefs put into developing their potato, sorry Potahto, dishes. This year, I along with my co-workers, were able to visit every single restaurant, thank them for participating and, in many cases, try their Potahto dishes,” says McIntosh.

“We don’t normally deal with restaurants directly because they buy through food service companies that we sell to, so this is an opportunity for us to talk to chefs and owners of restaurants and get them excited about potatoes and have some new dishes out there,” he adds.

“There were certainly restaurants that put something on the menu and then kept them even after Potahto Week because they were successful, and that to me is just a huge thing. And if the servers are talking about potatoes during Potahto Week, that’s just great for us.”

Back in 2016, P.E.I. Potatoes and Manitoba’s Peak of the Market were involved in a successful national campaign called “Half Your Plate” that featured magazine ads as well as videos of celebrity chef Michael Smith serving up potato and other vegetable dishes. Both organizations, along with other Canadian potato groups, contributed funds for the project.

Kendra Mills, marketing director for P.E.I. Potatoes, says the Half Your Plate campaign has been a success but she’s unsure if another joint project involving the different regional potato associations is something that will happen anytime soon.

Mills says it’s hard to get groups to commit the necessary money and resources required for a national promotion campaign, especially when “everybody’s got a different ship they’re steering.”

Larry McIntosh, president and CEO of Peak of the Market, agrees that national campaignsare very expensive, and “it’s difficult to get everybody to put up that kind of money.”

McIntosh says he believes individual potato suppliers and regional associations will likely continue to do their own thing for now, but he does see a day when all of the groups get together to work on a program similar to what’s being done by Potatoes USA, the national potato marketing agency south of the border.

“I’m not sure if it’s in the next five or 10 years, but I think that’s just going to make sense, especially as we consider what the U.S. and some other countries are doing with national programs, looking at their successes and saying, ‘you know, we need to do that,’” McIntosh says.

“It’s not going to be the next few years I think, but I do think that’s just a natural progression where we’re going to end up going.”