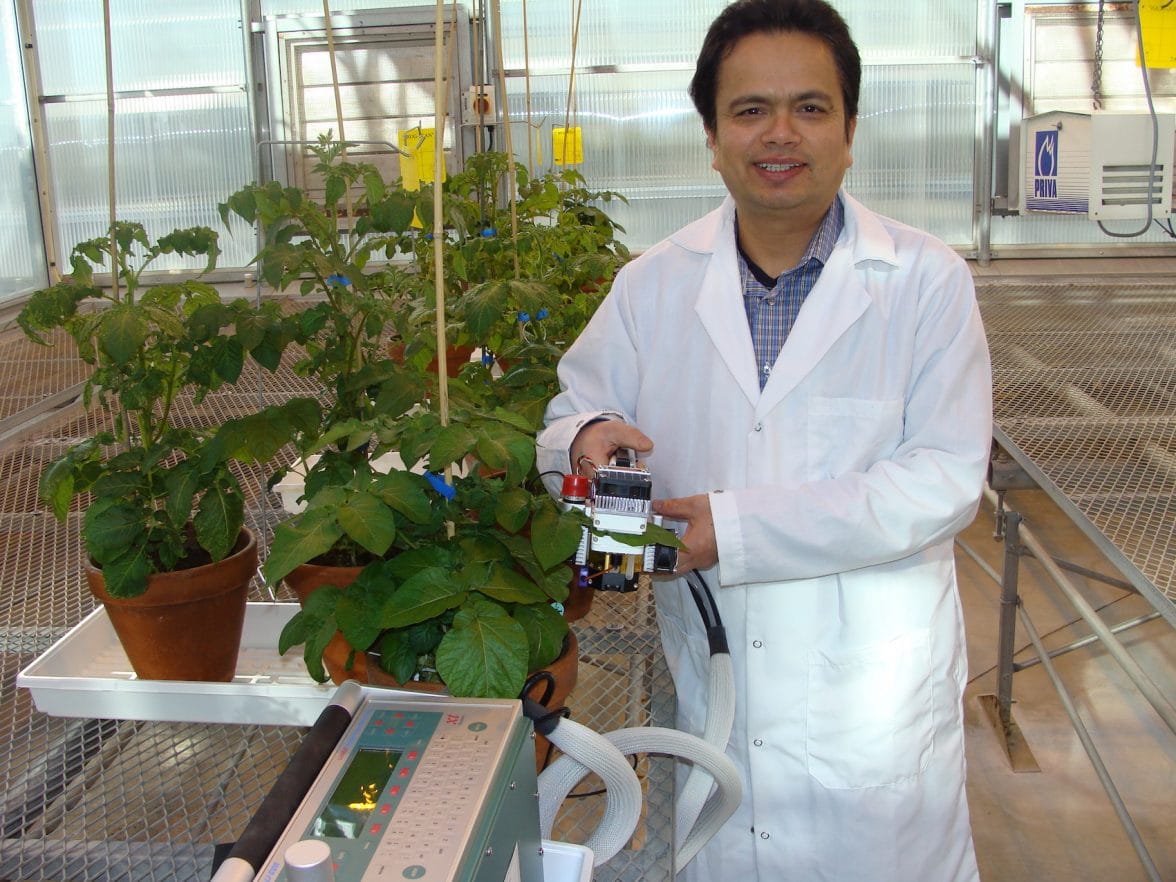 Preparing for the Potato’s Future

Laying the groundwork to identify traits that will help potato crops face the impacts of climate change.

It’s always been critical to breed new crop varieties with good yield and harvest quality, but it’s more important than ever to do so now, with crops facing myriad stresses related to changing climate conditions.

Dr. Keshav Dahal, a crop stress physiologist who joined Agriculture and Agri-Food Canada’s Research and Development Centre in Fredericton, N.B. during summer 2017, is helping unlock how some plants sense and react to stress more effectively than others. He is also using physiological, biochemical and molecular techniques to determine how stress impacts a crop plant’s productivity and quality.

“Climate change poses a major challenge to growth and yield of key crop species in several regions of Canada,” he notes. “I’m currently focusing on potatoes, but I am interested in studying wheat, rye and canola in the future.”

Dahal says the impacts of climate change have already been felt by crop farmers in the form of extreme weather patterns such as heat, drought, frequent frost, extreme or little snow fall and nutrient stress (nutrient uptake may be negatively affected by drought stress), as well as biotic stresses such as pests and disease. “These impacts are likely,” he notes, “to be amplified in the future.”

As a cool season crop, potatoes are considered to be sensitive to hot weather as well as drought, Dahal explains. “Temperatures above the optimal, typically 25 C, are likely to inhibit potato plant growth and survival, and reductions in tuber yield and quality result. “A study by Warren and Lemmen has shown that the annual average surface air temperature in Canada has increased by 1.5 C over the period from 1950 to 2010, and although such warming trends may benefit potato production in some regions, the increase in temperature and associated drought stress will overall have detrimental effects on crop productivity, including potato, in major Canadian crop-growing regions.”

Another study showed the nationwide drought in 2001 and 2002, particularly in Alberta and Saskatchewan, resulted in a decline in agricultural production, causing an estimated $3.6 billion loss over these two years. Gross domestic product declined about $5.8 billion during that time and over 41,000 employee lost their jobs.

“Similarly, in Ontario, which experienced extreme summer heat and drought in 2016, we saw a 17.2 per cent decline in potato production compared to the year before, according to Statistics Canada,” Dahal says. “Potential decreases in potato yield are likely to be further aggravated in the future because of the impacts of climate change. There is therefore an urgent need to develop innovations to enhance potato production practices and create new cultivars that can deal better with environmental stress.”

The underlying mechanisms that regulate crop growth and productivity under stress are not fully understood. Part of complete understanding will come from unravelling the mechanisms by which plants sense the changes in their environment, such as differences in CO2 levels, temperature, water availability and nutrient availability. It must also be determined how plants respond to these changes at the molecular, biochemical and physiological levels within cells, between cells and in the whole plant.

Dahal explains that at the molecular and biochemical levels, stress-tolerant plants boost their expression of stress-related genes and the associated production of certain proteins that help prevent oxidative damage.

“At the physiological level, these plants are able to maintain their rates of photosynthesis, movement of carbon and water use efficiency so that they keep growing to some extent,” he says. “At the plant level, stress-tolerant plants are capable of modifying their root and canopy architecture, the shape of their leaves, their height and other factors. Stress tolerance is really about having plasticity at some or all levels, enabling plants to survive stress, maintain overall plant performance, and increase biomass and seed yield. On the contrary, less stress-tolerant plants are unable to adjust to stress at the different levels, and consequently exhibit poor plant performance and decreased yield and quality.”

When asked if there one “tolerance” aspect (among drought tolerance, heat tolerance and cold tolerance, for example) that Dahal considers more important than others in terms of its potential to negatively impact Canadian crop productivity in the face of climate change, he identifies drought tolerance first and then heat tolerance. He notes that while warming trends associated with climate change may benefit crop production in some regions through increasing the length of growing season for example, rising temperatures also increase rates of plant evapotranspiration, depleting remaining moisture in the soil at faster rates.

To do his research, Dahal is measuring a variety of specific factors (photosynthesis, respiration/energy use, carbon metabolism, growth kinetics and water use efficiency) in stress-tolerant potato plants versus those not as tolerant to see exactly what traits exist and just how wide the differences are. Dahal is currently studying popular poatato cultivars such as Russet Burbank, Shepody, Vigor and Norland, but soon intends to study a wider number of potato cultivars which may have useful stress-tolerant characteristics.

The techniques Dahal is using include fluorescence, enzyme assays, metabolite quantification, gel electrophoresis and immunoblot assays. It will take several years of measurements to identify the key traits that regulate stress tolerance. After that, with the help of molecular biologists and geneticists, Dahal will eventually be able to identify and characterize target genes governing stress tolerance.

“Once we identify these genes, we can use them to breed or select new cultivars that can best adapt to stress associated with climate change,” he says. “Climate change is a global issue, and we know that associated increases in global temperature and severity, and frequency of agricultural drought will have negative impact on plant survival, growth and yield around the world. We also have a rising population globally, and I hope that my research to identify key traits that can be used to breed new cultivars to sustain – or even enhance – crop productivity under sub-optimal growth conditions will contribute to meeting the nutritional demands of the rising population.”

Potato farmers can also do their part to reduce climate change. Dahal says one of the best crop practices to mitigate greenhouse gas emissions is crop rotation with diverse crop species such as winter wheat/rye, canola, legumes and forage crops. He notes legumes are particularly important as they fix nitrogen in the soil and can dramatically decrease the emission of nitrous oxide, a major greenhouse gas. Planting legumes can also considerably reduce the amount of nitrogen fertilizer required for crops.