Development Costs in Time and Money

Of the European potato breeding companies interviewed, the experts said it can take from eight to 15 years to develop and introduce new varieties, and is often a risky undertaking.

From crossing to release takes C. Meijer B.V. about eight to nine years, says Heselmans, followed by first commercialization and multiplication, which carries a lot of financial risks as well.

Bandsma indicates it takes around 15 years to breed and introduce a new variety. “It is the time starting from the cross and selection and all the trial fields in The Netherlands and abroad. When the variety is in the registration process, we are setting up traditional stem selection and mini tuber production. This material is going to one or more growers. We estimate that it takes around €150,000 (C$228,000) to develop a new variety,” he says.

It also takes Solana about 15 years from the initial cross to market penetration of a potato variety. “One major factor in this lengthy process is the slow rate of tuber production, both in the initial breeding process as well as later on during seed potato production needed for introduction into the market. If special trait loci from unadapted germplasm need to be introgressed, decades of research and pre-breeding activities may precede the variety development phase,” Prigge says.

Backx shares that it takes HZPC about 10 years to select a new variety properly “and after that, we need five years to introduce a variety and to create planting material. That is a slow process,” he says. Breeding a new variety for variety introduction costs around €3 million (C$4.5 million), he adds.

Smeenge says his company, Kweekbedrijf Smeenge-Research, comes in at similar numbers. “We need 10 to 14 years and between €2 – €3 million per new variety.”

When considering future products, Smeenge says his company considers the needs of many stakeholders. “We try to think and talk about the wishes for the future with all the clients: growers, packers, consumers, industries, et cetera. It is difficult to look 14 years into the future,” he says.

Backx says HZPC must make sure its varieties are aligned with what customers want. “And that is not in the first place the grower. The grower is second or third, I would say. We need to predict what we think consumer preferences are. Therefore, we need to communicate with them, we need to analyze market trends, et cetera. A lot of marketing work is spent on that.”

Solana has its roots in agriculture and has always had a very close tie to growers. “However, in potato we need not only take the growers’ demands into account, but the end consumers are equally relevant, and these are individual consumers in the supermarket as well as packers and the processing industry,” Prigge says.

“At the Solana-Group, breeders work very closely with product managers and area sales managers and the feedback goes in both directions, thus influencing the whole breeding process from the choice of crossing parents to the final selection decisions and relevant markets for introduction,” she adds.

Nijs Potatoes first considers what its customers and clients want, says Bandsma. “When they are happy, mostly based on results from abroad, we are setting up multiplications. The growers look at tuber count, resistances against diseases, strong against heat and drought, strong against damaging, but most important is how much money they receive per hectare. Also, the maturity of all the varieties they grow, is very important [depending on how many hectares a grower grows].”

Heselmans says as a breeding company, C. Meijer B.V is active along the whole chain, both to introduce and support its varieties. “It is important a selection program is designed in such way that practical cultivation of the candidates is predicted in a proper way, both for common practices and for divergent situations like drought stress and high disease pressure.”

Backx says the biggest challenge a breeder has when developing new varieties is finding the correct compromise. “You never find a variety with all the required characteristics. But the total package needs to be close to what is required for that market segment. Understanding the needs of the customers is very important,” he says. 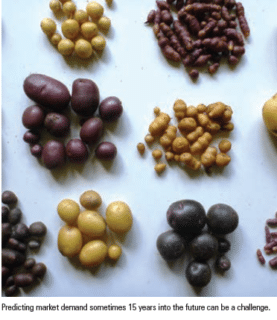 Bandsma maintains the biggest challenge for a breeder is to look into the future. “You want a variety for a specific market and it takes around 15 years to breed it. When you are going to introduce the variety, is it still what the market wants?”

Prigge identifies three major challenges for breeders. “First, we deal with [too] many commercially relevant selection traits which limits the selection intensity per trait to less than 50 per cent and requires constant compromises in the choice of parental combinations.

“Second, the low tuber multiplication rate [<15 for potato versus, for example, 1000 for rapeseed] leads to a lengthy breeding cycle and only allows assessment of complex traits at later stages, while the early selection decisions are based on visual assessment of one or a few plants and traits with low heritability.

“Third, the tetraploid and highly heterozygous nature of the crop makes working with recessive traits tedious and fixation of favourable allele combinations almost impossible, while fostering a high genetic burden due to hiding of deleterious alleles in the tetraploid genome.”

Smeenge concurs, stating that his biggest challenge is to present the right variety at the right moment for the right market.

Heselmans emphasizes that it is not the development of the variety itself, that it is not having the variety registered for plant variety protection (PVP) or value for cultivation and use (VCU), but that it is to have the variety grown to a serious commercial value. According to Heselmans, this is not a breeding effort, but a company effort.

According to Heselmans, innovation in itself is not a goal but using innovation to accelerate your breeding program in speed, magnitude and quality is the key. “Breeders nowadays have a whole range of possibilities in this area. More and more knowledge on potato genetics can be obtained, also in-house with all kinds of DNA platforms and approaches available.

“However, we have to realize that potato has 40,000 genes in many allelic variants with still unknown interactions. The best innovation is to make best choices in investment of people, time and money on the DNA oriented approach in balance with an efficient, reliable and fast field selection; a balance between genotyping and phenotyping,” he adds.

The big question is whether the hybrid varieties will lead to better and marketable varieties in the coming decade, says Backx. “Once that will work, can we produce true potato seed of those varieties? This will lead to a possibility to enter markets we cannot enter at the moment. Out of the 19 million hectares of potatoes in the world, most growers do not get proper seed potatoes or proper varieties. This is due to phytosanitary, political, or logistic barriers.”

Out of the 19 million hectares of potatoes in the world, most growers do not get proper seed potatoes or proper varieties, due to phytosanitary, political, or logistic barriers.
Click To Tweet

There are a number of challenges to overcome when breeding and commercializing new varieties, says Backx. “First of all, new breeding technologies — and not being able to use them. Secondly, the limitation to transport tubers from one area in the world to other areas. Thirdly, the number of countries with no breeders’ rights or no respect for breeders’ rights, and, lastly, the difficult procedures to require variety registration.”

It is a pity that the protection of breeders’ rights is not yet well regulated in parts of the world. Most of the countries in the world are UPOV members, but in many countries, there is no organization for the…
Click To Tweet

Heselmans shares that PVP regulations, in most cases, are well organized, but as a breeder of a vegetatively multiplied crop, illegal multiplication is the biggest hurdle. “This income reduction gives pressure on research budget, thus further development,” he says. 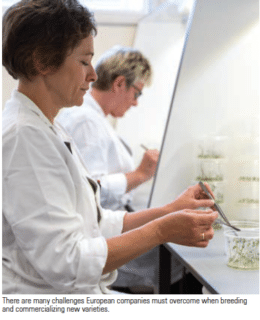 Prigge believes the biggest hurdle is the regulatory insecurity concerning new breeding technologies like gene editing. “We are almost set to apply these new tools to develop custom-made varieties having benefits for growers, consumers and the environment, but before even thinking about commercialization, we need the guarantee that these new products will not be regulated as GMO.”