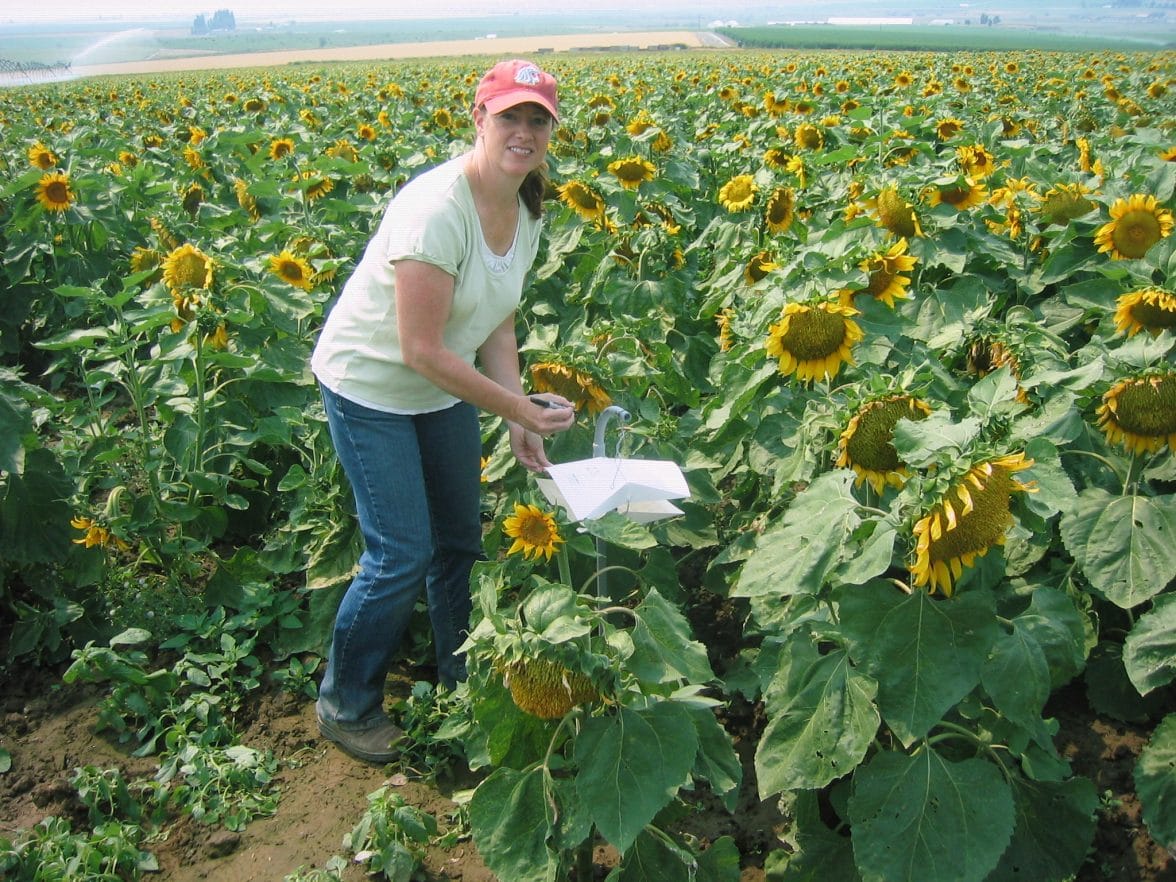 In her presentation at the 2019 Potato Association of America Annual Meeting in Winnipeg, Man., Carrie Wohleb, an associate professor and a potato, vegetable and seed crops specialist with Washington State University (WSU) Extension, will be sharing the results from a monitoring network in Washington State that tracks potato psyllids (Bactericera cockerelli). These little flying insects are the vector for Candidatus Liberibacter solanacearum, the bacterium that causes zebra chip disease.

Zebra chip was first documented in Mexico in 1994 and has been spreading ever since; it recently touched Canada. This disease can result in major yield losses, and the tuber symptoms include brown flecks that turn into dark blotches and streaks when the potatoes are fried, making the tubers unmarketable.

“In 2011, we had our first outbreaks of zebra chip disease in the Columbia Basin of Washington and the Pacific Northwest — Washington, Idaho and Oregon,” says Wohleb.

“In Washington, a couple of potato fields were pretty much destroyed. That’s a huge loss after you’ve put everything into the crop only to lose it all at the very end. And we were also finding symptomatic tubers here and there in other fields.”

The monitoring program was established in 2012 to help Washington researchers and growers figure out how to tackle this potentially devastating disease.

The program tracks potato psyllid populations across the Columbia Basin using a network of yellow sticky cards. It also tests all of the collected psyllids to see if they are carrying the bacterium. And it includes some leaf sampling to see if the bacterium has been transferred to plants. The program is funded by the Washington State Potato Commission.

“The findings from our psyllid monitoring program are shared every Friday in our e-newsletter, called WSU Potato Pest Alert,” says Wohleb. “The potato growers here are very interested in our results every week.”

The newsletter’s weekly psyllid distribution maps provide an early warning system; if growers are in an area with high psyllid numbers, they can step up their own on-farm monitoring efforts or apply insecticides if needed (email cwohleb@wsu.edu to subscribe to the newsletter).

One of the intriguing findings that Wohleb will be discussing in her PAA presentation is the huge fluctuation in the size of the Columbia Basin potato psyllid population from year to year. She adds, “We see some zebra chip every year, but we haven’t had any major outbreaks since 2011. I’ll probably talk about some of the reasons why we think that is.”

The ongoing monitoring effort is helping Wohleb and her research group put the weekly data into a firmer context, so they can more accurately say what a small, moderate, or large psyllid population looks like, and better understand the threat of different Liberibacter infection rates in the psyllids. Currently, only about 0.14 per cent of the psyllids in the Columbia Basin have been infected with the bacterium. In some other regions, psyllid infection rates have sometimes been much, much higher, and those higher rates have been linked to higher incidences of zebra chip in potato crops.

Wohleb says, “In the future, we hope to be able to predict exactly where and when zebra chip is going to occur in the Columbia Basin so growers can target the psyllids using an intensive management program when the psyllids are likely to cause problems, and can save their money and not waste applications when the risk is very low.”