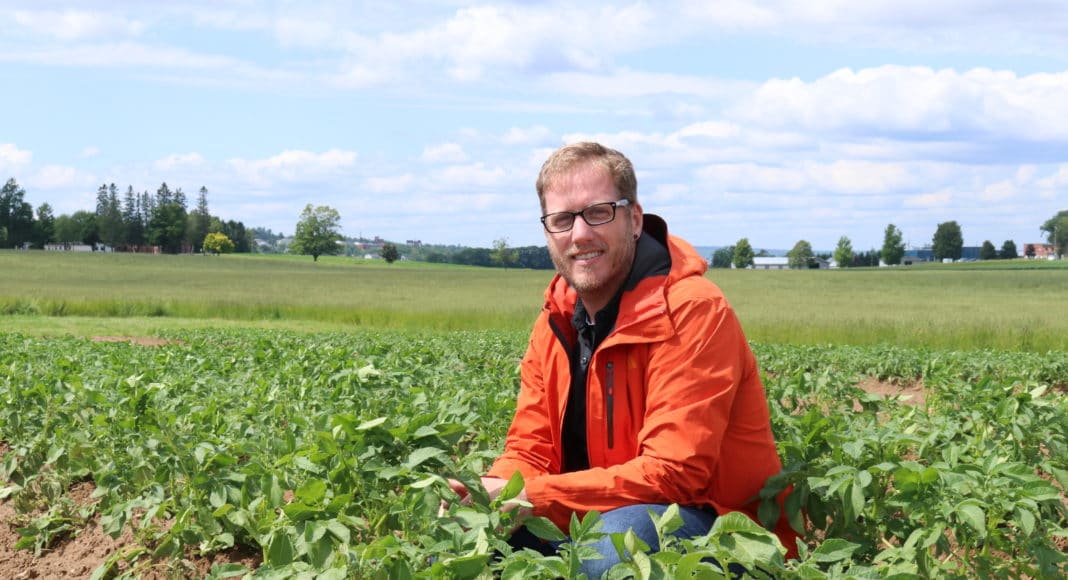 As with any field crop, young potato plants face many threats. Erosion, wind, drought and competition from weeds are a few of the factors that can impede the plants’ optimal growth.

This is why a team at Agriculture and Agri-Food Canada (AAFC) in the Maritimes has been looking into nurse crops — what they describe as fast-growing companion crops planted during the potato-growing season that help draw water to root systems, provide shade and shelter, and keep weeds at bay.

Building on the knowledge that cover crops provide benefits such as reduced soil erosion when planted after harvest, the scientists wanted to investigate how intercropping nurse crops with potatoes might have a beneficial effect on potato plant growth and production during the growing season.

“In North America, intercropping practices are common in grass, legume, and cereal or forage production,” says biologist Sheldon Hann, AAFC Fredericton. “The use of nurse crops in potato production has been shown to be promising in highly-mechanized large-scale monocropping systems like potatoes, but intercropping is not very common in these crops. It generally requires an increase in time and labour investment.”

In addition to Hann, the team for the three-year study (which ended in 2017) included Bernie Zebarth and Josée Owen, also at AAFC Fredericton, Sherry Fillmore at AAFC Kentville and Judith Nyiraneza at AAFC Charlottetown. Field pea and winter ryewere chosen as nurse crops for their ability to be seeded early, germinate quickly and become established reliably. In the study, the nurse crops were intercropped with potatoes at two seeding rates at a site in New Brunswick. The winter rye was seeded at 150 pounds per acre (high rate) and 100 lb/ac (low rate) while the field pea was seeded at 140 lb/ac (high rate) and 75 lb/ac (low rate).

“We are currently analyzing the soil and plant data and are optimistic that the analysis will provide some insight into why there were different yield responses,” Hann reports. “The low seeding rate in winter rye may have provided increased soil moisture without having a competitive effect that a high seeding rate may have had on the potato crop. The high seeding rate for field pea may have provided increased soil moisture and an enrichment of nutrients after termination without having the competitive effect expressed in the high rate of winter rye. The results also may be due to the vegetative and root structure of the nurse crops, and further evaluation of the soil and plant data may provide insights to this.”

In addition, the effectiveness of how the winter rye was terminated may matter. All nurse plants were terminated 20 days after planting and different methods of killing them were compared. With field peas, mechanical hilling termination resulted in higher potato yields compared to the method of herbicide followed by mechanical hilling. Hann says in this case, it seems the action of hilling the nurse crop was adequate enough to terminate its growth and hilling field peas in their green form (alive) compared to desiccated form (dead) may have provided a resource for the potato plant. In winter rye, a herbicide was needed to ensure the nurse crop did not compete for resources.

Nyiraneza says the field pea results also might be due to how their root architecture and decomposition rate differ from winter rye. In addition, field pea is a legume which fixes nitrogen from the atmosphere and its nitrogen content may therefore provide benefits to the potato crop.

In a paired study, Hann and Nyiraneza evaluated spring barley and winter rye as nurse crops using a single seeding rate for each crop. “We also evaluated the effect of two herbicide treatments (non-selective and selective) against a control, and yield increased with the non-selective herbicide,” Hann explains. “The results were mixed using mechanical control or a selective herbicide.”

Hann also measured the total nitrogen and carbon content of the soil as well as samples of the nurse crop and potato plants (both in the above-ground vegetation and the roots) as plant decomposition (in this case, the nurse plants) can affect these measurements. This data is currently under analysis.

Encouraging results related to potato yield increases with nurse crop intercropping have been reported in other trials conducted by AAFC team members in Prince Edward Island, McCain Foods in New Brunswick and in Maine by John Jemison at the University of Maine. In addition, soil moisture content tended to increase with nurse crops under the trials conducted in Fredericton, N.B., by Hann, and in Prince Edward Island by other AAFC team members and McCain Foods.

In terms of season-long average moisture content, Hann says, in particular, winter rye seeded at the high rate provided the greatest increase. Analysis is currently underway to determine the significance of this result. However, Nyiraneza notes that nurse crops can be part of the solution of retaining soil moisture in cropping systems that return a low amount of organic residues to the soil, and in areas characterized by sandy soils and heavy rainfall in spring, which are more susceptible to soil erosion.

It’s clear the results of these studies show nurse crops to be promising as companion plants in potato production, but seeding rate, termination timing and date, time investment, the costs associated with seed and herbicide, as well as the logistical aspects and scalability, all require further investigation.

“Researchers also need to further evaluate nurse crop species selection and the effects of soil type as well as the benefits of nurse crops to environmental health and ecosystem services such as soil erosion prevention,” Hann says. “This will all assist farmers in the decision-making process in terms of whether and how to include nurse crops into potato production. We also plan to assess whether a mix of nurse crop species is better than a single crop, and further assess the effects of the presence of nurse crops on the movement and retention of soil water.”

Overall, researchers must make sure the slight yield increases observed with nurse crops help net higher revenues when all costs of production are taken into account, says Nyiraneza.

Nurse crop trials were carried out in the U.S. state of Maine in 2016 by John Jemison, an extension professor of soil and water quality at the University of Maine. It is important to note in the study year, Maine potato yields were very low due to a lack of rain. Winter rye sowed at 200 pounds per acre significantly increased potato plant number and biomass compared with the 100 lbs/ac seeding rate. The 20 lb/ac annual rye treatment provided similar plant numbers, but they had significantly lower biomass than either the 100 or 200 lb/ac cereal rye treatments. However, Jemison does not recommend annual ryegrass for nurse crop use because plant biomass is much slower to develop compared with cereal rye.

Delaying incorporation rather than killing the nurse crop with a herbicide prior to incorporation led to lower marketable potato yields. The cereal rye nurse crop not killed with herbicide was not completely buried by the hiller and likely competed with the potatoes for water and nutrients, which limited yield.

See full Spud Smart feature on this study and other related studies at https://spudsmart.com/novel-option-combat-soil-erosion/