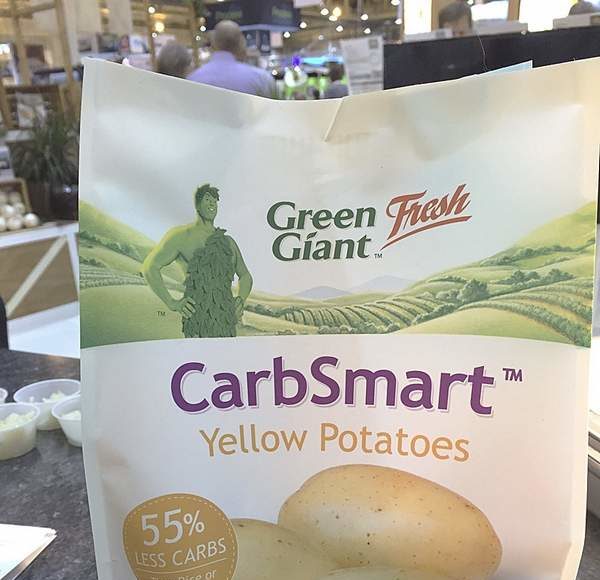 Earlier this year, a new low-carb spud appeared on shelves in New Zealand. With 40 per cent less carbohydrates and calories than ordinary potatoes, Lotatoes were created by cross-breeding different varieties. Lotatoes won the Primary Sector Products Award at the 2017 New Zealand Food Awards.

Last year, EarthFresh Farms introduced the new Carisma potato, marketed mostly for having a low glycemic index. Grown and distributed in Ontario, Carisma – along with other low-carb potatoes – appeals to consumers who are watching their carbohydrate intake – either because they are diabetic or watching their weight.

The Carisma potato, which is not genetically modified, originated in Joure, Netherlands. It has been grown from seed in that country as well as Australia for at least five years. According to the company, a 150-gram Carisma potato — a medium size — contains 70 calories, three grams of protein, three grams of fibre and 15 grams of carbohydrate.

Potandon Produce’s Director of Product Marketing and Development, Carter Bray, said CarbSmart has been in development for years and is aimed at multiple consumer trends, including those about health.

“It gives some people who are a little weary on the carb front permission to eat, and you’re getting good nutrition,” he said.

Aside from the ongoing popularity of low-carb and low-calorie foods, Bray said the yellow-skinned and yellow-fleshed CarbSmart also takes advantage of the popularity of coloured varieties.

Bray said Potandon is confident CarbSmart can appeal to both millennials and baby boomers. Though they both think of health differently, and may require distinctive messages to reach them, millennials will be looking for healthier options as they begin having families and start cooking for children, while baby boomers may start keeping a closer on eye on health as they age.

At the annual meeting of Potatoes USA earlier this year, CEO Blair Richardson said the U.S. potato industry should stop trying to combat negative health claims against potatoes and start touting the nutritional benefits of potatoes, especially as a healthy source of energy for athletes and those with active lifestyles.

“What we see is consumers that want health and nutrition and ‘proper fuels’ (you hear that phrase) to get through their day and through their activities,” Bray said.