[deck]The U.S. company behind the biotech potato says when it comes to Innate adoption in Canada, it will continue to be “patiently persistent.”[/deck]

INNATE POTATOES, the biotech spud from Idaho-based J.R. Simplot Company, have been approved for production and sale in Canada since 2016.

Since then, Innate has been grown in field trials in P.E.I., Ontario and Manitoba and the trials are expected to continue in 2019. But aside from a few acres in Ontario that’s producing an Innate chip variety for an American processor, there isn’t any commercial production of Innate potatoes in this country. You won’t find Innate in any Canadian stores either.

Doug Cole, senior manager of marketing and biotech affairs at Simplot, says the company is building its program in Canada from the ground up and it takes time for a product like Innate to gain acceptance.

“We want to make sure that the market comes to us,” says Cole. “We are patiently persistent. We will wait until the marketplace is ready.”

Innate technology was developed by introducing genes from wild and cultivated potatoes to enhance and suppress specific traits.

The first-generation traits of Innate are reduced bruising and black spots and a lower amount of the amino acid that produces the natural chemical acrylamide during cooking. The Gen 2 potatoes feature Generation 1 traits plus late blight tolerance and lower sugar levels for optimal storage and improved processing.

Cole says it’s Simplot’s position that it’s largely up to potato producers to drive adoption in Canada by selling retailers and consumers on the benefits of Innate potatoes, and that growers who participated in Innate trials in Canada should be front and centre in developing this market.

“These growers have seen the product in the fields, have tested it vis-a-vis conventional counterparts, and I think are fully aware of its capabilities. They’re having their own conversations with retailers or they’re coming with us to meet with them to basically demonstrate that the growers want this, that this is something that’s beneficial to the industry,” says Cole.

“This really just comes down to Canadian retailers and food service providers — once they demonstrate interest, we have plenty of growers lined up that would like to grow for us. We’re starting with trying to get the customers first and then we will follow suit in selling seed to Canadian growers.”

Cole believes a pioneer will eventually emerge among Canada’s retailers and food service companies that puts Innate’s health and sustainability benefits “first and foremost” for its consumers.

“In the marketplace, there is hesitancy in being first, but everybody wants to be second,” says Cole. “All [retailers] want to be in the leading edge … once that retailer does go first, there’s usually a whole bevy that want to jump on because they don’t want to be left behind.”

In the marketplace, there is hesitancy in being first, but everybody wants to be second.
Click To Tweet

Kevin MacIsaac, general manager of the United Potato Growers of Canada, says he’s aware of discussions taking place about Innate between potato growers and packers and some of the country’s large grocery chains as well as a few smaller chip manufacturers. He believes there is some interest but not enough at the present time to spur any retail orders or chip contracts. 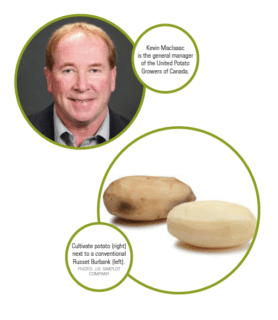 MacIsaac is optimistic, however, that Innate will eventually catch on in Canada.

“I think time will work some of these things out. It’s a process where you have to educate people who don’t understand the background behind this breeding program, what the advantages are to the grower, to the industry people, and to the consumer,” MacIsaac says.

“I think eventually we’ll get to that point someday but it’s not there today.”

Peter VanderZaag, owner of Sunrise Potato in Alliston, Ont., and a noted potato scientist, is a proponent of Innate, believing the biotech potatoes benefit growers, consumers and the environment.

“Once people see the merits or the benefits of the Innate potato, I think they’ll say this is something we like and it’ll catch on,” VanderZaag says. “I believe there needs to be some kind of nudge from Simplot or some retailer here in Canada to make that happen.”

Once people see the merits or the benefits of the Innate potato, I think they’ll say this is something we like and it’ll catch on.
Click To Tweet

It’s a different picture for Innate south of the border, where the potatoes are currently available in some 4,000 supermarkets.

Cole points out that Simplot is entering its fifth year of selling the White Russet potato featuring Cultivate and Acclimate russet varieties in the United States.

“We are excited about our continued growth in the White Russet program. We are now up to two million units sold in 40-plus states, and we’re very satisfied with the response so far,” he says. 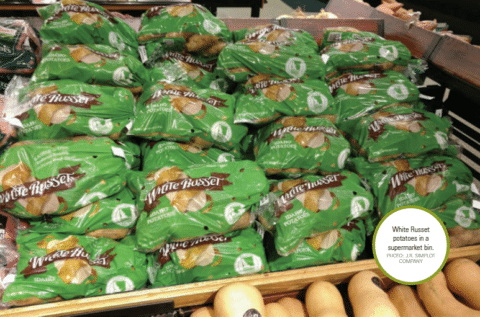 Currently, Innate fresh and chip potato varieties are being grown commercially on about 4,000 acres in the United States.

Cole says production is expected to expand even further when Innate potatoes are accepted by regulatory authorities in more countries. In addition to the United States and Canada, Innate Generation 1 potatoes are approved in Mexico and Japan, and Simplot anticipates additional approvals by such countries as South Korea and Taiwan will come in early 2019.

Coles says plans are in the works to introduce a Generation 3 potato to the marketplace that has additional late blight resistance genes (make it, in Coles words, “a global potato”) and is also resistant to potato virus Y, a major disease in seed potato production.

Cole says the Generation 3 Innate potato should be ready in about three to four years, and when that happens it will be submitted to Canadian regulatory authorities for approval.

ARCTIC APPLES: AT THE FOREFRONT OF BIOTECH CONSUMER EDUCATION

Doug Cole, senior manager of marketing and biotech affairs at J.R. Simplot Company, says Innate potatoes are at the forefront of a new wave of biotech food products with consumer benefits being developed for the marketplace, and he points to the non-browning Arctic apple as another example.

Two Arctic apple varieties received regulatory approval to be grown, sold and consumed in Canada in 2015. A third non-browning variety was approved by Canadian health officials in early 2018.

Neal Carter, president of Okanagan Specialty Fruits, says the company produces all of its own apples in commercial fruit orchards located in eastern Washington.

“At some point we will begin production of commercial operations in Canada, but we do not yet have a timeline for that,” says Carter. 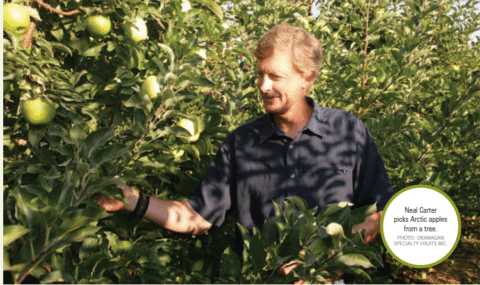 Arctic apple products have been available to consumers through Amazon and some retailers in the United States since 2017, but they aren’t sold in stores in Canada yet. Carter notes there are plans to introduce Arctic apples to the Canadian market shortly after the 2019 harvest.

“We are already actively attending various industry tradeshows and engaging with retailers, dietitians, the media, consumers and other stakeholders to bring awareness to the unique benefits Arctic apples offer,” Carter says.

“Our goal is to educate as many consumers as possible about the many common misconceptions that are out there surrounding biotech foods, including sharing that there is an extremely rigorous process that all biotech foods must satisfy before they can be freely grown and sold,” he adds. 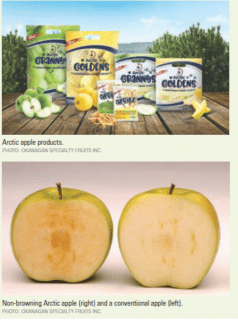 “Arctic apples are the most studied apple there is and reviews from experts at the U.S. Department of Agriculture, Food and Drug Administration, Canadian Food Inspection Agency, and Health Canada all agree that Arctic apples are as safe and healthy as other apples,” says Carter.

“We have found in our experience that transparency and enabling the public to experience Arctic apples firsthand are very impactful in educating consumers and gaining their support.”