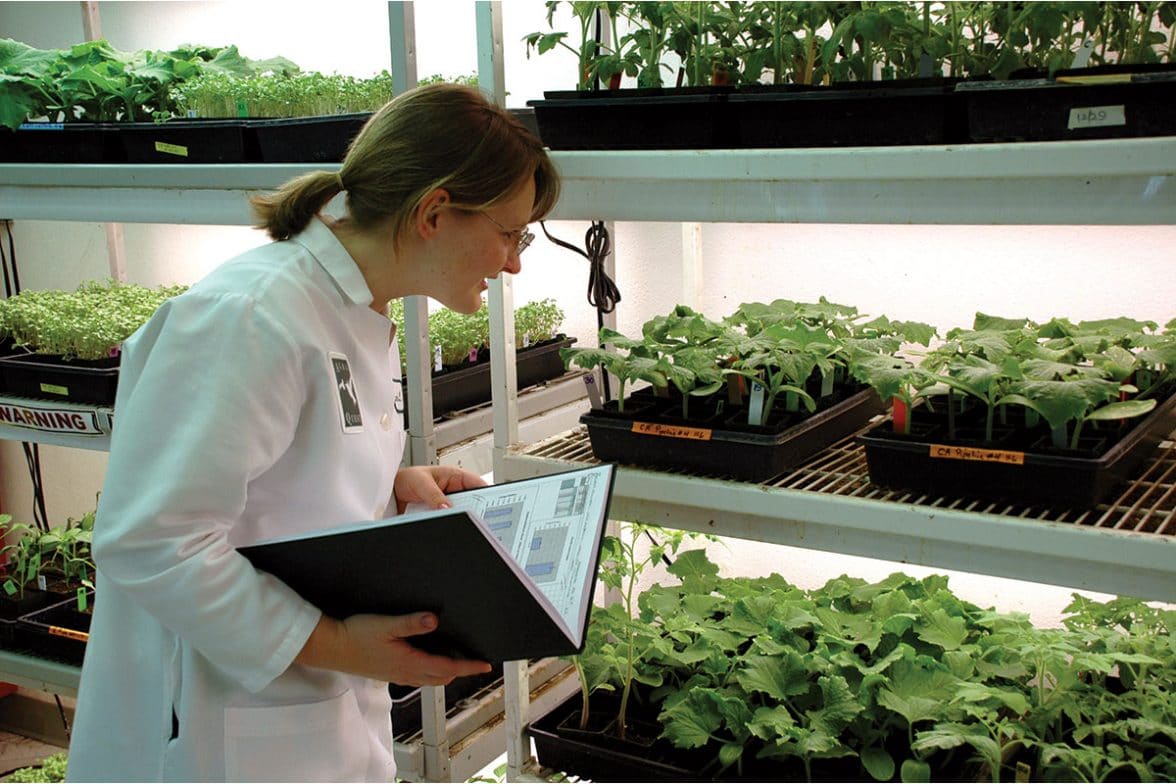 In the battle against potato pests, what’s old is becoming new again. Biological pesticides, or biorational pesticides as they are also known, are gaining growing acceptance among farmers, despite the fact that biological pest control technology is anything but new. In fact, this type of pest control — that is, using ‘natural’ substances produced by Mother Nature to combat diseases and insects — is the oldest weapon in a farmer’s arsenal.

“The first pesticides ever really invented were from natural sources; those would be copper-based fungicides,” says Dave Bell, an agronomist with crop input supplier United Agri Products Canada, which distributes biorational and synthetic products.

While opting for natural products rather than synthetic chemicals to control pests may not be a new concept, what has changed is the move by an increasing number of growers choosing to make natural pesticides a part of their overall pest management strategy.

“We believe that the market is somewhere in the $1.5-billion range for biorationals globally,” says Bill Stoneman, executive director of the Wisconsin-based Biopesticide Industry Alliance, which is dedicated to fostering adoption of biopesticide technology. “That’s a pretty small slice right now. But our growth rate is estimated to be [nearly 16] per cent per year. That’s a significantly faster rate of growth than the chemical side. The data suggests that biorationals will represent six per cent of the market by 2017.”

As the European Union implements strict rules governing maximum residue levels for pesticides (in some cases, these levels are required to be reduced by as much as 50 per cent), residue management on crops is a hot topic among growers. As environmental regulations around the world become stricter, an increasingly important consideration for growers is making use of pesticides that won’t disqualify their potatoes from export to certain areas of the globe.

“Growers have to think globally, because they don’t know where their potatoes [and other crops] are going to go, where they will be exported to,” says Janet Porchak, marketing director for UAP Canada.

UAP used to distribute Serenade fungicide before that product was acquired by Bayer CropScience as part of its purchase of the biorational product firm AgraQuest in 2012. Serenade is based on a certain strain of Bacillus subtilus bacteria, also known as QST 713. It’s a biofungicide that aids in the suppression of early blight in potatoes when applied foliarly. Serenade works by producing metabolites which, from a fungicidal standpoint, “punch holes into the cell membrane of the disease,” according to Andrew Dornan, senior field development representative for Bayer CropScience Horticultural Products.

Organic red potatoes from Manitoba’s Kroeker Farms, which makes use of biorational pesticides to ward off disease and insects.

Manitoba’s Kroeker Farms has used the Serenade product, in addition to several other biorational pesticides. Based in Winkler, Kroeker Farms is known as one of Canada’s leading potato producers, and is Manitoba’s largest producer of organic potatoes. Marvin Dyck, an agronomist at Kroeker Farms, says biorational pesticides offer an advantage as far as the environment is concerned. “They tend to work more with the surrounding environment and less against it. There are less unintended organisms caught in the crossfire,” he says.

That’s one of the big benefits biorational products offer to not only organic produce growers — who rely on them to keep disease at bay while sticking to the principles of organic farming — but also to conventional farmers as well. “We go looking for these products, we’re actively seeking them out, and want to get as many into our lineup as possible,” says UAP’s Bell. “If you can deliver value to the grower, then they will choose those lower-impact products. Every farmer I’ve met is an environmentalist, and a big part of that is they want to minimize their impact.”

McCain Foods, the world’s largest producer of french fries, is also taking this approach. Over the 2013 crop year, agronomy staff at McCain Foods Canada evaluated various commercially available and novel biorational products in replicated field trials, as well as commercial strip trials. “McCain Foods is continually looking to minimize the environmental impact of potato production and to reduce the active ingredient load applied to our potatoes while achieving top potato yields and quality,” McCain Foods Canada agronomist Emily Snowdon says. “At a time of increasing consumer awareness with regard to food production and food safety, it is imperative that McCain Foods encourages our growers to take advantage of these alternative products.”

Stoneman emphasizes that consumer awareness is indeed a big driving factor in the biorational market. He says if a company like McCain is “telling their growers to use [biorational pesticides], or qualifying their growers based on their ability to use these products, that will drive growth. Consumer demand is having a big impact,” he says. “In the frozen food industry — and it’s true for potatoes and other vegetables — many of those acres are contracted acres. Here in Wisconsin, the pest control decisions on processing vegetable production acres are made by the contract company. I think there will be more of that as these markets want a direct channel to the farm and some control over what they’re selling.”

Kroeker Farms uses a variety of biorational pesticides in its organic potato operation.

It is integrating biorationals into conventional agriculture, not just into organic farming, that companies like Bayer CropScience and UAP are focusing on. “The thing growers have to keep in mind is that a number of the [biorational products] need to be used within a program. They’re not a silver bullet, but neither are synthetics,” Porchak says. “Farmers are stewards of their land, and they’re very dedicated to that and willing to look at new technologies, but it has to have the efficacy they’re looking for.”

Dyck recommends using check strips to evaluate the efficacy of a biorational product. “Take yield and quality samples and compare results with fields where you use more mainstream products as inputs,” he advises.

Snowdon says growers who choose to use a biorational product should do so carefully and be mindful of what pest they are trying to eradicate. “Because biorational products typically have a narrow pest spectrum, the McCain agronomy team highly recommends that growers looking to use such products ensure that a stringent scouting program is in place. It is important that growers make sure they are applying the correct product to control the problem pest,” she adds.

The Serenade fungicide product line is expanding — according to Dornan, Bayer CropScience recently received registration in Canada for Serenade Soil, which is applied in furrow at planting to protect young potato plants against rhizoctonia. It works by allowing the QST 713 bacteria to establish and colonize on the developing roots of the plant, continually producing the active metabolites which provide the fungicidal activity.

The number of new biorational insecticides available in the marketplace for potato farmers is growing as well. Valent BioSciences produces DiPel, which has an active ingredient called Bacillus thuringiensis (Bt) that kills many species of worm pests including some that affect potato plants. Valent also produces XenTari, which also targets worm pests and uses Bacillus thuringiensis var. aizawai (Bta), composed of protein crystals and viable endospores, as its active ingredient. It’s meant to be used along with DiPel.

“We’ve studied some of these wild species that have insect resistance and profiled their chemical composition, with the goal of being able to improve the breeding process so we know which chemicals are responsible for that resistance,” he says. “If we were able to identify and isolate such a compound, it could potentially have use in other applications, like a bioinsecticide.”

Stoneman notes that due to the fact that biological ingredients are derived from completely natural sources, developing new biorational products is significantly more economical than developing new synthetics — making biorationals ideally suited to research and development.

“New chemistries are very costly to bring to market. It’s somewhere in the order of $300 million to develop a new active ingredient [for a synthetic product],” says Stoneman. “In our sector, it’s somewhere in the $2 million to $5 million range, depending on the company and complexity of the product. So you’ve got a distinct advantage in terms of development of new active biological materials entering the marketplace.”

The pesticide industry understands it’s not just the “natural” label of biorational products that appeals to farmers, but also the agronomic benefits derived from using them. UAP is marketing traditional synthetic insecticides that give farmers many of the benefits of a bioregional product in a synthetic pesticide. “I would broaden the definition of bioregional products. There’s traditional chemistry that’s so effective in very low doses and with such a very good environmental profile, even though it may not be derived from a natural source,” notes Dave Bell, an agronomist with United Agri Products Canada.

Beleaf 50SG is an FMC product that protects potatoes against aphids, which has a pre-harvest interval of seven days for potato and a maximum residue level of 0.2 parts per million. Ramón 10 EC from Chemtura controls Colorado potato beetle, and has a PHI of 14 days for potato and a MRL of 0.05 parts per million. Both products are a part of UAP’s umbrella brand Balanced Technology, which includes synthetic products that can be applied at very low rates, says Bell, which means they “have a lot lower impact on the environment.”

Another benefit is fewer days from application to harvest, notes Janet Porchak, marketing manager of UAP Canada. “You could have a crop where you’ve got an excellent product, but you can’t spray it a certain number of days to harvest. Some of these products you can spray the day of harvest. When you’re dealing with a horticultural crop like potatoes where you may not be spraying, but want people in [your field] scouting, there’s another benefit.”

Andrew Dornan, senior field development representative for Bayer CropScience Horticultural Products, says, “We are seeing conventional growers adopt both biorational and the new conventional chemistry in a programmed approach to pest control. The biorational products are fitting very well at certain times during the season where pest pressures tend to be lower and can potentially replace one or two conventional sprays.”

With the Bayer CropScience acquisition of AgraQuest, it also acquired the Requiem line of synthetic insecticides, which is actually derived from a natural source. Requiem, a foliar application, targets all life cycle stages of sucking pests, from larvae to adults, and its active ingredient is a synthetic version of a biochemical originally found in an insecticidal plant. “The fit for Requiem in potatoes may be potato psyllid, which has yet to become a significant pest in potatoes in Canada, but is certainly a threat,” Dornan says.

However, Requiem isn’t yet registered for use in Canada. Dornan says Bayer CropScience is hoping to have Requiem approved for Canadian use in the near future. “There is progress, it’s kind of like baby steps. We have to be able to show the grower the benefit of using the product,” he says. “As long as growers keep seeing beneficial results, we’ll continue to see adoption of these products.”