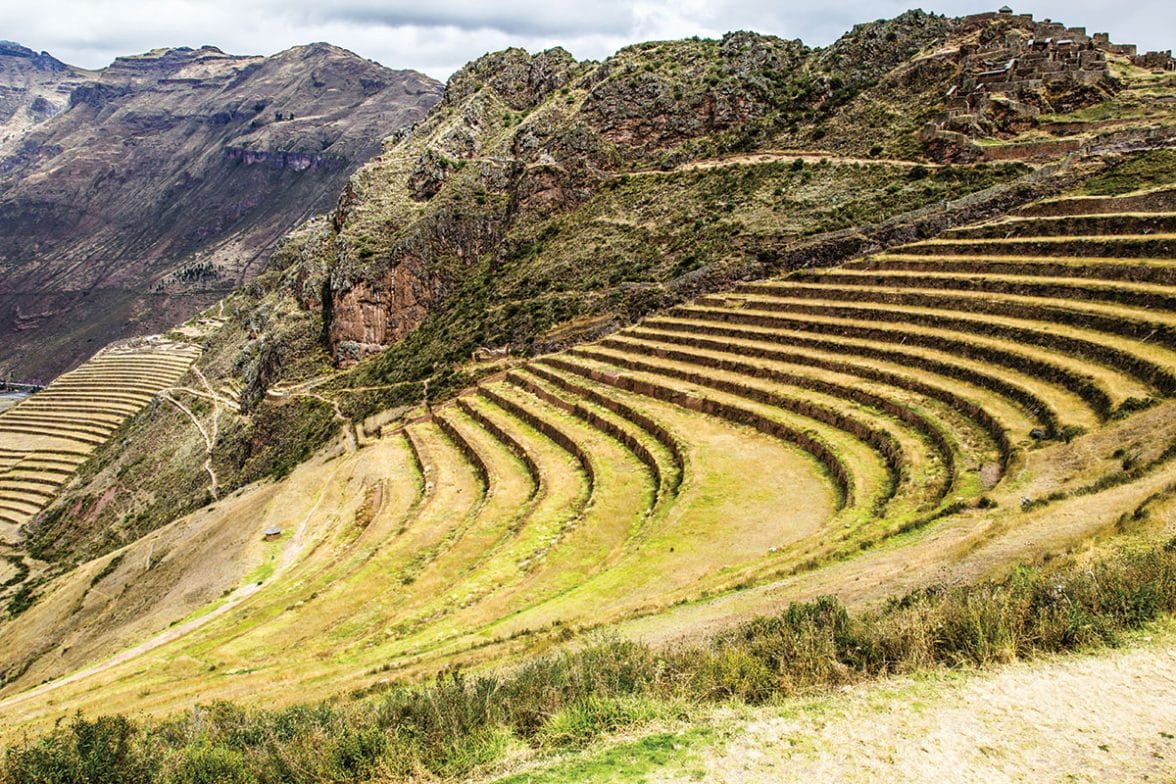 Potato field terracing is a common practice in the Andean Highlands.

Domestication of the Potato

How South American tubers have evolved over time to become one of the world’s major food crops.

Domestication can be defined as the human creation of a new form of a plant or animal — one that is clearly different from its wild ancestors and relatives. Of the tens of thousands of plant species on the planet, only a few hundred have been domesticated. Of these, a dozen or so — including the potato — provide a large majority of the world’s food supply.

The ‘chaquiticalla” or foot plough was an early food in potato production still in use in some areas today.

The potato as we know it today is far different than the plant first seen by humans many millennia ago. The first people to encounter the potato were those located along the west coast of South America towards the end of the last Ice Age, who were probably plant gatherers, hunters and fishermen.

The transition from hunters and gatherers to a more sedentary society may have taken a thousand years or more. Wild potatoes from the (then) humid coastal plains of South America were probably first eaten by people as early as 13,000 years ago.

As the Ice Age glaciers retreated from the Andes Mountains, the prototypes of the cultivated potato emerged in the highlands of what are now Peru and Bolivia. The domestication of the potato probably took place about 8,000 years ago in an area around Lake Titicaca, which is located on the border of present day Peru and Bolivia. The oldest known samples of potato, based on archeological studies, go back to that time.

One of the first steps in the domestication of the potato was the selection of non-bitter tubers. Many wild potato species contain natural compounds called glycoalkaloids, which confer resistance to insects and diseases. While useful to the plant, these compounds also have a serious drawback: they impart a bitter taste and, at high enough levels, are toxic to humans.

A major development, therefore, was discovering ways to circumvent these bitter compounds. This can be done in several different ways, one of which is selection and propagation of non-bitter types. Another, albeit unappealing approach, is still practiced in some regions of the Altiplano (a high plateau in the Andes). Here people knowingly eat toxic potatoes, but also eat a special clay which binds to glycoalkaloids, thus neutralizing them.

A more intricate system to eliminate these substances that involves freeze-drying was also developed in the Andes. Bitter tubers are exposed to freezing temperatures for three or four nights. During the day, the potatoes are trampled by foot to remove moisture and potato skins. The trampled potatoes are then transferred to a stream of water to allow the bitter compounds to leach out.

The final freeze-dried product was known as chuno. It could be stored for a year or longer, and it essentially represents the oldest known form of potato processing. Chuno was used by populations from higher altitudes to barter for products from lower elevations.

Black and white chuno, a form of freeze-dried potato developed in the Andes. Photo: Fremen Tours.

The growing environments in the Andean region are highly variable and range from subtropical conditions at low elevations to a cool, temperate climate at higher altitudes. It is not surprising, therefore, that people domesticated different potato species best suited for growing in different environments.

For example, some species that have considerable frost tolerance are cultivated in the highlands of Peru and Bolivia (3,800 to 4,100 metres), where most other cultivated species would not thrive. These frost-tolerant potatoes were probably selected by the Aymara Indians in the harsh climate and poor soils of the Andes of southern Peru and northern Bolivia.

Group of native potatoes harvested by a family of farmers in Peru. Photo: A. Balaguer, International Potato Center.

Another species is grown in mountain valleys at much lower altitudes (800 to 1,000 metres). Eventually several of these ancestral species hybridized, either naturally or with the (either deliberate or inadvertent) aid of early Andean farmers. There is great diversity for shape and colour among the ancient Andean cultivars.

As was the case with the domestication of other crop plants and animals in other regions of the world, the emerging agricultural lifestyle in the Andes resulted in greater food production, which in turn stimulated population growth, development of cities, technology, crafts, arts, sciences, political centralization (including kings and bureaucrats), soldiers and other pursuits.

There is a great diversity of shape and colour among ancient Andean potato cultivars. Photo: International Potato Center.

The Incas adopted and improved upon the agricultural advances of previous highland civilizations, which often included the construction of terraces. Another major piece of technology invented by the Incas is the “chaquitaclla” or foot plough, which is still in use today in some areas.

The potato was the major staple food of the Inca Empire, which had a population of 12 million people and stretched for 4,000 kilometres in South America. The crop gradually diffused from Peru to the rest of the Andes and beyond. Pictures of potato plants and tubers on ancient pottery demonstrate that the potato was cultivated for thousands of years before the Spanish conquistadors reached South America.

The origin of the European potato has recently been traced from the Andean highlands to Chile where it (inadvertently) became more adapted to growing under day lengths similar to those in Europe. From Chile, the potato travelled to the Canary Islands in the Atlantic Ocean and eventually to the European mainland where it grew to become an important food crop.

My partner and I stumbled over here by a different web page and thought I might check things out. I like what I see so now i’m following you. Look forward to looking into your web page repeatedly.

Domestication of the potato