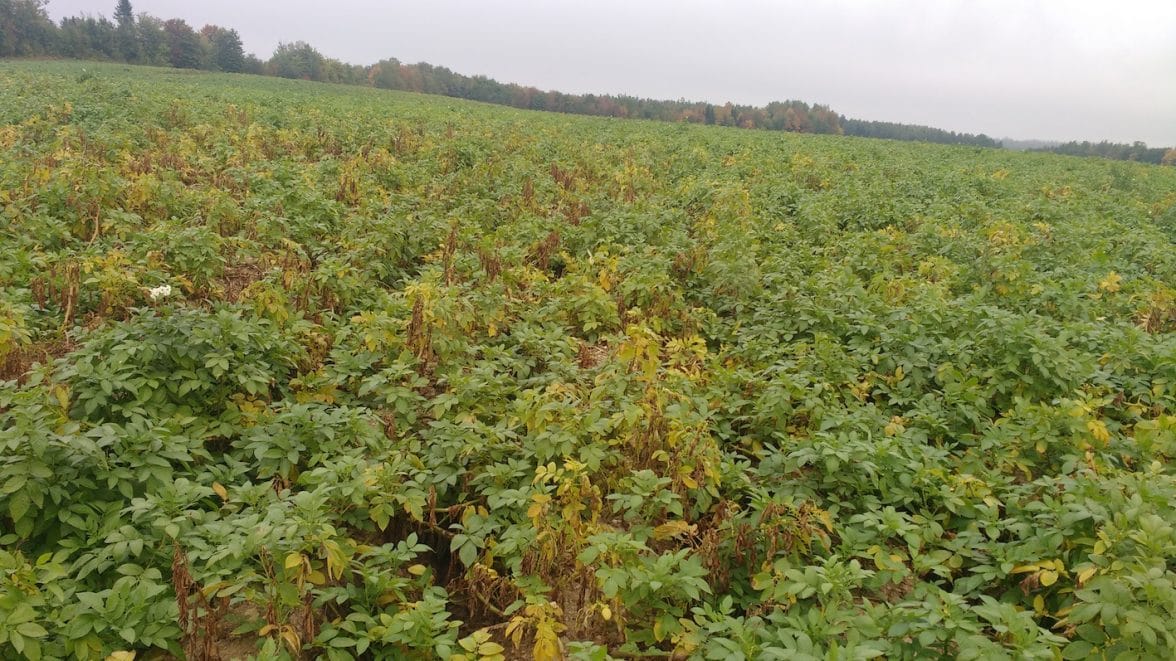 Infected and dead plants stand up higher than the other plants in the field (upright), a condition called flagging.

Potato early dying (PED) is also known as early die and early maturity wilt. This disease is endemic in many fields with a long history of potato production.

There is increased pressure on Canadian processing potato production to increase productivity to remain competitive in regional and global markets. PED is a major yield-limiting factor in all major potato production areas of Canada.

PED results in premature vine senescence and can limit potato tuber yield by as much as 50 per cent. The disease is primarily caused by the fungal pathogen Verticillium dahliae, but co-infection of potato by both V. dahliae and the root lesion nematode, Pratylenchus penetrans, can greatly increase the severity of the disease. The disease casual agents vary with region in Canada. V. dahliae is present in all potato growing regions of Canada; V. albo-atrum in Atlantic Canada; and P. penetrans in Ontario, Quebec, Atlantic Canada and British Columbia.

Nematodes are microscopic roundworms that feed on plant roots and live in soil and plant tissues. They damage the roots and cause stunting, yellowing, wilting, poor stand, and yield and quality reduction. Symptoms severity is nematode density dependent (higher numbers of nematodes per kg of soil can cause more damage).

Verticillium can overwinter in infected tubers and plant debris. It can spread from one part of the field to another by runoff water, cultivation and machinery such as harvesters. Verticillium species invade xylem elements, disrupt water transport in plants and cause vascular wilt in a variety of hosts.

Verticillium species are soil-borne fungi that can survive in the soil as resting structures called microsclerotia (MS) without a host for several years. MS density is one of the factors affecting disease incidence and severity.

Synergistic interactions of the main causal agent of PED (Verticillium dahliae) and/or other pathogenic fungi (V. albo-atrum and Colletotrichum coccodes) and the root-lesion nematode (Pratylenchus penetrans), have been shown to severely increase PED incidence and to reduce yield.

The PED disease is characterized by a general decline of plants four to six weeks earlier than normal maturity. The disease first appears as interveinal chlorosis on leaves of individual or groups of plants scattered among healthy appearing plants. Wilting and necrosis then follow and progress acropetally from the stem base. The symptoms observed are uneven chlorosis of the lower leaves, and unilateral leaf wilting or death. Stems eventually become necrotic and senesce prematurely and may remain upright. A tan, vascular discoloration may occur near the stem base. Vascular browning may develop in tubers of some cultivars. Plants across an entire field could die over a several weeks’ period.

Techniques currently being used included plate counts for Verticillium (colony forming unit per gram of soil; CFU/g soil); real-time qPCR (RT-qPCR) for V. dahliae (cell/g soil); and nematode identification and counts (number of root lesion nematodes/kg of soil). Complicating our ability to predict PED in fields is inadequacy of current commercial testing methods. There are Verticillium and Pratylenchus species in our soils that do not cause PED. Researchers in Canada are developing rapid testing methods for separation of species of Verticillium and Pratylenchus. These methods need to be standardized and validated for potato soils across Canada before being made commercially available to farmers.

No cultivars are completely resistant or tolerant to V. dahliae and therefore, control strategies in Canada are generally limited to cultural practices and/or chemical fumigation. A longer potato rotation is practiced to limit PED losses, however in our oldest potato soils, rotation frequency does not control the disease. The other cultural practice employed to control PED is ensuring sufficient soil nitrogen. Soil inorganic nitrogen promotes vine growth to escape induction of wilt symptoms but if not careful, nitrogen oversupply can reduce yield.

In Manitoba, composts, green manures, biofumigation with mustards, chemical fumigation with metam sodium and rotation crops have been examined for control of PED. Composts and chemical fumigation have been successful in fields with high PED pressure, whereas longer (three-four year) rotations have been successful in preventing rapid buildup of the disease. PED losses also vary with growing conditions, with hot dry summers aggravating the disease. Less is known of PED controlling factors in Atlantic Canada and Alberta.

Management of Verticillium wilt pathogens is very difficult due to their wide host range and the production of MS that can persist in the soil for several years. Several researches had shown promising results of the effect of organic soil amendments, including animal and green manures, disease suppressive crop rotations, biofumigation with mustards, and chemical fumigation with metam sodium and chloropicrin. While effective, chemical fumigation represents a significant cost for growers and may also adversely affect soil health, it is also a practice that is scrutinized by the public and consumers. Fumigation represents a practice increasingly considered to be non-sustainable although it significantly increases tuber yield and gives economic control or suppression of Verticillium severity. Consequently, it is necessary to consider alternatives to chemical fumigation for control of PED.

New pest control products for the management of PED are now available in North America (fungicides for the control of soil-borne diseases of potatoes, including Verticillium wilt; and nematicides for the management of nematodes, including root lesion nematode). Limited assessment of these products has been performed in Atlantic Canada. A promising option for the control of PED, especially where the root lesion nematode is present, is biofumigation using cruciferous crop residues such as high glucosinolate mustard varieties, marigolds and pearl millet, all of which have shown good potential to reduce nematode populations in the soil.

Practices to manage PED may have a strong influence on soil health. In addition, the severity of PED symptoms may be reduced in healthy soils despite elevated pathogen populations. For example, in Manitoba, soils with high organic matter content may not show PED symptoms and yield reduction despite very high levels of V. dahliae in the soil. There is a poor understanding of how management practices of PED influence soil biological communities and indices of soil health. Particularly, chemical fumigation is known to reduce beneficial microbial communities and aggravate disease in subsequent potato crops. In severely affected PED soils, a combination of chemical fumigation to reduce Verticillium and nematode pressure followed by soil health building (e.g., compost, green manures) is a practical possibility to increase yield and avoid dependency on fumigation.