[deck]Long-time Potato Association of America members, Robert Thornton, Larry Hiller and Rich Novy open up about the organization: where it has been, where it is now, and where it’s going.[/deck]

Robert Thornton, an extension vegetable specialist and professor emeritus at Washington State University has been attending Potato Association of America (PAA) annual meetings since the early 1960s. He says the biggest reason he has maintained his membership for more than five decades is it keeps him honest.

“Every year is an opportunity to have your thinking questioned,” Thornton says. “You can stay isolated in your own area of concern and be very comfortable and effective. When you attend a meeting, you find out there are people with a lot of information you can use to do better what you thought you’ve been doing awful well already.”

The association was founded in 1913 by a handful of growers who identified the need for a specialized scientific interchange of information between individuals working on potato diseases and other issues.

“Disease was the biggest problem, and insects to some extent,” says Larry Hiller, WSU associate professor emeritus in the Department of Horticulture and Landscape. “Big challenges at that time were also potato marketing and potato storage,” he adds.

Those founding members funded many of the association activities out of their own pockets, laying the groundwork and establishing guiding principles for an organization still going strong 105 years on.

From its inception to the current day, the association has been a primary voice for potato science and has relayed science-based research to the industry helping it remain competitive, says Rich Novy, current PAA president and a research geneticist with the USDA Agricultural Research Service in Aberdeen, Idaho.

Research conducted by PAA members helps address emerging issues, says Novy. “You’re going to see, and this has always been the case with potato, either old diseases or pests that tend to resurge or brand-new ones in a given area,” he says. For example, Novy has recently participated in the submission of a new grant to continue research in the area of tuber necrotic viruses as potato mop-top virus and tobacco rattle virus become increasingly problematic to the North American potato industry.

“The industry needs science-based research and data to aid in decision-making. PAA can contribute, especially where you have newly emerging diseases that could really impact the industry. As a science-based association, helping industry address pressing issues is something PAA does quite well,” says Novy.

“The industry needs science-based research and data to aid in decision-making. PAA can contribute, especially where you have newly emerging diseases that could really impact the industry. As a science-based…
Click To Tweet

This has been proven time and again by the accomplishments of the association’s members. One of the major contributions is new variety development, which is “solving some of the industry’s major problems,” says Thornton. More than 300 potato varieties have been developed and released by North American PAA members.

Cultivar development over the years has led to many advances in disease and insect resistance and quality-related factors, and the new potato cultivars being adapted to production sites and techniques are very instrumental to the success of the industry, says Hiller. 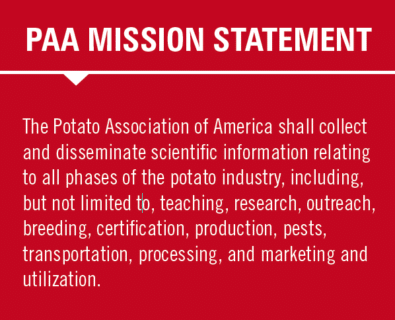 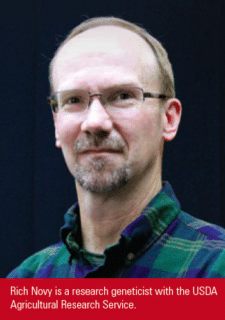 Further mapping and identification of genomic regions important for potato traits, such as cold sweetening and sugar end disorder resistance and disease and pest resistance, is moving ahead as well. Novy says a molecular biologist will be added to the research team at Aberdeen, which will add another dimension to the breeding program.

PAA scientists have contributed to all aspects of potato production. One such area in which major advances have been made, and close to Hiller’s heart, is the physiological disorder internal brown spot. Large strides in harvesting, bruising, and impact reduction of potato drops and movement, have also been made, says Hiller.

Advances in the control of diseases, insects and weeds, and increased emphasis on producing high-quality potatoes, and the maintenance of specific gravity in French fries can also be attributed to association members.

“Then the whole area of potato storage, potato sweetening, potato darkening during chipping and French fry-making, those are all major changes and advancements. Obviously, there was progress made back in the early days … advances in shipping and the marketability of the potato,” says Hiller.

“At this point the relevance of PAA is to relate to changes in society, consumption trends and market preferences, and to keep the science and advances in potato production and technology up to those expectations. We have to constantly be on the forefront looking at current trends in society and meeting those demands,” he says.

From plant physiology and pathology to insect pests, harvesting, handling, storage, marketing, and nutrition and utilization, it’s the multidimensional nature of the organization covering diverse scientific aspects that has made it so effective over the years, says Hiller.

“In a nutshell, anybody and anything that has something to do with potatoes can be part of PAA and get something out of our organization,” he says.

“In a nutshell, anybody and anything that has something to do with potatoes can be part of PAA and get something out of our organization.” Larry Hiller
Click To Tweet

That includes producers. Information is distributed during PAA meetings or through producers’ state or provincial organizations on new crop protection products, growing practices, machinery harvesting parameters from seed cutting and planting through harvest, innovations in storage, marketing and utilization, and production and storage management guidelines for new potato varieties.

“Growers are on the forefront of science and technology when they are involved with PAA. They get the latest information to take back and put into their fields and their production practices,” says Hiller. 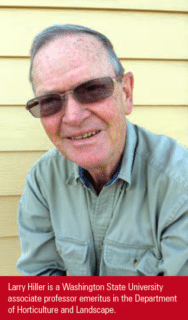 Four hundred and sixty-eight members from 25 countries and six continents make up PAA’s membership. Annual meetings over the past century have taken place across North America. The 103rdannual meeting will take place in Winnipeg, Man., and is the 15thtime a Canadian city has hosted the event. Meetings have also taken place in Vancouver, B.C.; Calgary, Alta.; Toronto and Guelph, Ont.; Quebec City, Que.; Fredericton, N.B.; and Charlottetown, P.E.I.

“You become familiar with and acquainted with expertise that is not locally available, but can provide information on local issues. You have a cadre of expertise you can call on that’s beyond where your normal area of contact would be.”

In fact, international participation is increasing, says Novy. “Our association is welcoming of that international exchange and we try to promote it.” This year, the Global Outreach Committee international guest speaker is Monica L. Parker of the International Potato Center, Nairobi, Kenya.

“We’re looking outside of North America and welcoming international scientists. It is good to keep a global outlook and establish new avenues of cooperation, with Dr. Parker to present on production systems and value chains for potato in sub-Saharan Africa,” says Novy.

Another primary component of PAA is the training of grad students. “For me, the PAA annual meeting was a great place to cut my teeth on giving presentations, and that has served me well over my 24-plus years in research,” Novy adds.

Historically, says Thornton, presentations were made by established scientists, educators or industry people. Over the last 20 years, the inclusion of graduate students has increased and a significant segment of presentations are made by them.

“PAA is key to the development of the future scientific and educational community and industry from the younger people who are going to be tomorrow’s resources,” says Thornton.

“PAA is key to the development of the future scientific and educational community and industry from the younger people who are going to be tomorrow’s resources.” Robert Thornton
Click To Tweet

He has supervised six PhD students, of which five have become part of the industry. Such a percentage moving into the industry is the norm, and not the exception, he says. “Students leave our program and move into the potato industry, or into industries allied with the industry in a service capacity or other role. That’s a huge contribution PAA makes.”

“Everybody is there to support the graduate students and really give them assistance and help and guidance whether they’re in their program or somebody else’s program,” says Hiller.

One of the association’s most important attributes according to Thornton, Hiller and Novy, and one which stands out for all members, is its sense of camaraderie.

“It struck me the very first meeting, and ever since, and that’s the family nature of PAA,” says Hiller. “In so many scientific organizations, scientists are worried about their own little domain — and they protect it. They’re very secretive and they don’t let much out, and they don’t let many penetrate that shell. That just does not exist within PAA among potato scientists.”

This fellowship fosters greater communication within and without the association, says Hiller. “There’s a sense of exchange in scientific presentations and discussions. You’re not protective, you’re outpouring, you’re sharing, you’re building something together and you’re helping yourself by helping somebody else and they’re helping you, and so forth. To me that’s an important aspect of what we call this family feeling to the PAA organization.”

Thornton adds, “It brings about a feeling of common interest and brotherhood among people who are professionally committed to the well-being of the potato industry, such as educators and scientists, who perceive their role in life is to help maintain a viable, economically-sound, environmentally-friendly, industry.”

According to Novy, although the industry may seem large with individuals from many different backgrounds, countries, and professional disciplines, it’s still a close-knit group.

“Even though we’re 468 members representing 25 countries, you have the opportunity to reconnect annually at the PAA annual meeting. Yes, they’re your colleagues, but in a way, it becomes more than that. It really does give one a sense of a family reunion. It’s a wonderful opportunity to build both personal and professional relationships and develop research collaborations.”