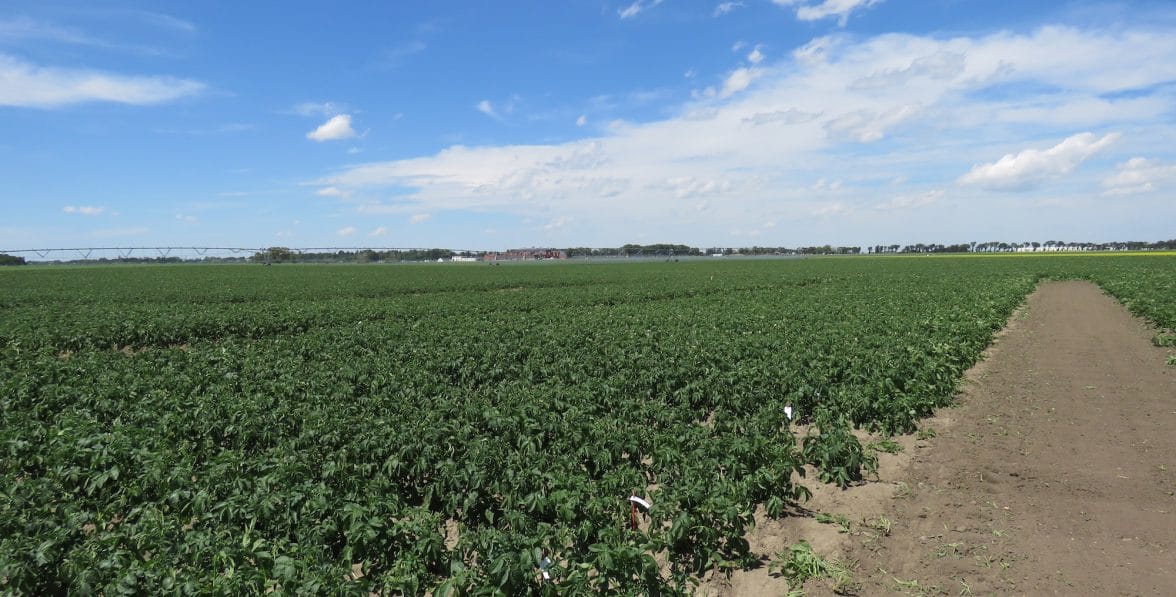 Is There a Best Way to Manage Nitrogen?

Researchers are evaluating three of the 4Rs to optimize nitrogen fertilizer management for improved yield, quality and profitability in irrigated potato production.

A major project with studies in Manitoba and Alberta has been comparing diverse nitrogen management options to see if there might be a clear winner when it comes to irrigated potato production on the Prairies.

The project was prompted by several considerations.

“Potato is one of our crops where we apply the most amount of nitrogen. So any study that helps us to fine-tune nitrogen management to optimize yields and quality and get the most profits is rewarding,” explains Mario Tenuta, a soil scientist at the University of Manitoba. He is the principal investigator for the overall project and is leading the Manitoba study.

“Also, potatoes are often grown on coarse-textured soil, so nitrogen is prone to losses, particularly leaching losses. We need studies to ensure nitrogen will be present in the soil when the potato crop needs it.

“And lastly, potatoes are grown under irrigation in some of Canada’s large potato growing areas, particularly in Alberta and Manitoba, and there has been a shift to fertigation, adding soluble nitrogen to the irrigated water stream. Fertigation provides the opportunity for multiple nitrogen applications, but that requires more management – you need more thought and time to set up the applications and to answer the question ‘How much nitrogen do I add?’”

The Manitoba study has two phases. Phase 1 assessed various nitrogen management practices for irrigated production of Russet Burbank. It took place at Carman and Carberry, and ran from 2013 to 2015. Phase 2 is looking at fertigation in more detail. Started in 2016 and almost complete, the studies were conducted in the same two areas.

Choosing which treatments to include was challenging. Tenuta says, “We’re working with the 4R approach – the right rate, right source, right timing and right placement of nitrogen fertilizer. There are multiple options in all of those; you could design experiments with hundreds of treatments.”

So Tenuta, his lab and his colleagues trimmed that huge range down to 11 treatments for Phase 1. The treatments included both traditional options and more recent alternatives. The study team collected data on stand vigour and tuber yields, tested soil and petiole samples for nitrogen levels, and evaluated tuber quality.

“The main result was a definite yield advantage to splitting the nitrogen,” says Tenuta.

“The results of the experiments are telling us the nitrogen rates in Manitoba’s provincial guidelines are conservative in terms of making sure the plant is not shorted on nitrogen,” notes Tenuta. “Even when we reduced the amount of nitrogen to 80 per cent, we were still at optimal levels [for yield and quality]. In other words, our results indicate we have room for reducing nitrogen rates in Manitoba.”

However, he cautions, “Using nitrogen also helps with disease management, particularly potato early dying caused by Verticillium and in some cases root-lesion nematode. If the potato plant has a good supply of nitrogen, the nitrogen will cause increased vine growth, which allows the plant to sidestep the damage caused by potato early dying. So we have to be careful. I think we can reduce nitrogen rates without hampering yield, but my question is: would we be aggravating disease, and then eventually lose yields because of that? That’s where I’d like to be taking the research in the near future.”

The Alberta field experiments took place at Lethbridge from 2014 to 2017, and the lab analyses are nearly complete. The experiments followed the same general approach as Phase 1 of the Manitoba study, comparing different nitrogen options for irrigated production of Russet Burbank, collecting data on stand vigour and tuber yields, testing soil and petiole samples, and evaluating tuber quality.

The main difference between the two studies was in the choice of treatments.

“There isn’t really a grower standard practice for nitrogen management in Alberta potato crops; different growers approach it differently,” explains Michele Konschuh, potato research scientist with Alberta Agriculture and Forestry (AAF) who is leading the Alberta study. “So we had questions like: Is there a best way to manage nitrogen? Does it matter when you put the nitrogen on, or is the rate the main factor? Does the form matter? And are there ways that you can get the best yield and quality without leaving yourself at risk for environmental losses?”

Konschuh worked closely with the Potato Growers of Alberta (PGA) to select the study treatments.

“We stayed with nitrogen sources that Alberta growers use now and focused on different timing options,” says Konschuh. In 2014, they had 10 treatments; in 2015 they added two treatments suggested by growers; and then in 2016 and 2017 they went with 10 out of the 12 treatments to have a more manageable study size. Several of the 10 treatments are routinely used by Alberta potato growers.

The results varied from year to year due to different growing season conditions and to some differences in applied and residual nitrogen levels.

“Two of the three involved fertigation, but fertigation wasn’t essential. And the split treatment was as effective as fertigating. You don’t have the flexibility that you have with fertigation, but splitting the application ensures that the crop has nitrogen to go the distance,” she says. “ESN was involved in two of the three. The other neat thing we found was that ESN typically doesn’t reduce specific gravity in the tubers as much, whereas urea and fertigation can drop specific gravity a little more quickly. So if growers are worried about the specific gravity being too low, they can use ESN, and they can also be confident the nitrogen will not be lost to the environment.”

“The take-home is that there is more than one way to get the yield and quality that the processors desire,” says Konschuh. “Alberta growers are really very savvy. They use agronomy services and work with the processing agronomists, and some growers experiment all the time. So although they don’t all use the same fertilizer strategy, several of the strategies they use are winning strategies.”

Like Konschuh, Tenuta sees good nitrogen management skills among growers. “Manitoba growers are already paying a lot of attention to nitrogen management. I think almost all the growers and crop consultants are using at least some aspects of the 4Rs. They are doing soil testing in the spring. And many are using petiole sampling, in-season soil sampling and looking at the timing of tuber onset; and then based on their experience, they are using that information to make decisions on fertigation applications.”

He encourages growers to do test strips in their own fields to see how different nitrogen rates affect yield, tuber distribution and other factors, and whether the recommended rates are giving optimal economic yields, or if the rates could be reduced or increased.

Tenuta also suggests growers examine the logistics of their nitrogen management strategy to see if there might be ways to improve their net profits. For example, he says it might make economic sense to apply all the nitrogen as ESN in a single application, providing nitrogen over the growing season without the extra costs associated with additional nitrogen applications.

Konschuh’s team will be doing an economic analysis of the Alberta data to see which nitrogen treatments are the most profitable. Since ESN and UAN are both more expensive than regular urea, she suspects treatments with both fertigation and ESN would likely be among the most expensive ones. “So unless you’re getting a significantly higher yield with a more expensive treatment, you may be better off looking at some of the other winning strategies that are less expensive and less hassle.”

Read more on this topic in the Winter 2018 issue of Spud Smart magazine.