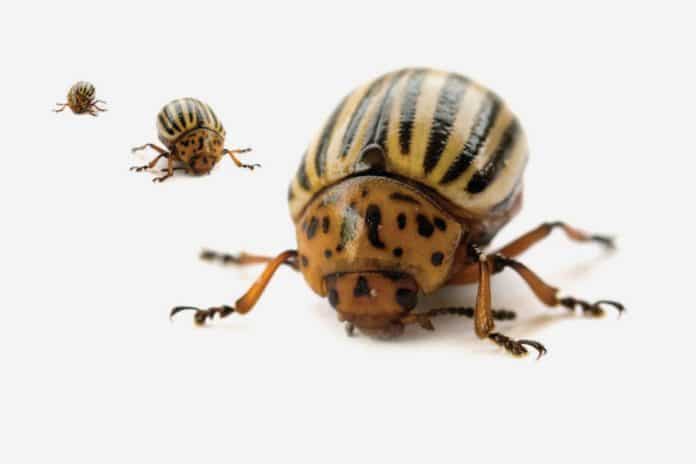 [deck]The Colorado potato beetle has spread throughout North America and other parts of the globe, while repelling all efforts to eradicate it. Here’s a look back at the colourful past of this resilient — and highly vexing — bug.[/deck]

The Colorado potato beetle is arguably the most devastating insect pest of potatoes, with most of the damage done by its voracious larva.

This pest occupies an interesting place in North American potato history. Its first discovery in the United States was in the Rocky Mountains in 1811, when it was found feeding on sand bur, a wild relative of the potato. The name Colorado potato beetle is really a misnomer because it did not originate in Colorado. Instead, it is believed to have come from Mexico.

For a while the beetle was known by different names such as potato bug, ten-lined beetle and ten-striped spearman. In 1867, entomologist Charles V. Riley was the first to coin the term Colorado potato beetle in his book, Potato Pests.

In his book, Riley described in great detail the migration of the beetle as its range expanded across North America. Its appetite for potato was not known until 1859, when early settlers west of Omaha, Neb., spotted the pest devouring their potato crops.

The beetle quickly spread further eastward, often hitchhiking along the newly-built railroads and moving across the U.S. about 130 kilometers per year, on average. By 1874, it had reached the East Coast.

In 1876, the New York Times reported that Colorado potato beetles were hampering the progress of a train on the Central Railroad at the Grinnell Station. As reported in the newspaper, “the rails were covered with them for a mile and after a few revolutions of the drivers the wheels lost the friction and slipped as if oiled.”

In 1870, the beetle crossed the Detroit River into Canada. In his book, Riley described the river as “literally swarming with beetles, and they were crossing Lake Erie on ships, chips, staves, boards, or any other floating object which presented itself.” By 1883, the beetle had reached Canada’s potato-producing hub, Prince Edward Island.

The rather photogenic adult beetles have been featured in some rather unusual places, including on postage stamps and in earrings. In the 1870s, the adult beetle had such a high profile in society that for a few years black- and yellow-striped evening gowns were fashionable. A joke at the time had potato beetles studying mailing lists of seed companies to find out who had ordered seed potatoes!

Before the use of pesticides, farmers had to pick the bugs off the potato leaves by hand. By the late 1800s, some mechanical devices appeared on the market. The simplest of these were potato beetle pincers, soon followed by several other more sophisticated devices.

During the 1890s, Prince Edward Island inventor Allan Hunter devised a machine, which he produced and sold to local potato farmers. Hunter’s bug picker resembled a wheelbarrow and was pushed between rows of potato plants. As the machine moved, the paddles on both sides whacked beetles off the potato leaves and into trays of kerosene below, killing the bugs.

However, it was clear that neither picking by hand nor mechanical bug pickers were capable of truly controlling this voracious pest. A number of insecticides aimed at killing Colorado potato beetles were evaluated in the 1860s and 1870s.

Among them was a copper-arsenic compound called Paris Green, which when diluted with flour and dusted on potato plants was found to be effective. This was in essence the first large-scale use of an insecticide on an agricultural crop.

Other insecticides such as lead arsenate and DDT were used in subsequent decades. However, the potato beetle has become notorious for its development of resistance to virtually all insecticides that have been used against it.

More recently, scientists have been advocating an integrated pest management approach, which includes various non-chemical approaches including cultural practices and the use of natural enemies. The latest developments in Colorado potato beetle control also include new potato varieties bred to be resistant to this tough pest.

The Bolivian wild species S. berthaultii is resistant to the Colorado potato beetle and many other insects. This resistance is based on glandular hairs on the lower side of the leaves. When an insect rubs against a hair the gland ruptures and exudes a glue-like substance that traps the bug, impeding its movement so it eventually starves.

Scientists at Cornell University in Ithica, N.Y., have incorporated this trait into two commercial cultivars, Prince Hairy and King Harry. In 2007, the Mailorder Gardening Association honoured King Harry with a Green Thumb Award as one of that year’s best new plant varieties.

The Beetle Goes to War

During or immediately after the First World War, the Colorado potato beetle became established around American military bases near the French city of Bordeaux. By

the Second World War, the bug had spread across much of Europe.

During that war, both the Allies and Nazi Germany considered dropping Colorado potato beetles on each other’s potato fields. The German government claimed that American planes were dropping “Amikäfer”(Ami-beetles) over German potato fields and even set up a potato beetle defence service.

After the war, Soviet-controlled East Germany also accused the Americans of dropping potato beetles on its fields. The propaganda was reinforced by the publication of a large number of posters and treatises.

Although several governments conducted research on how to use the Colorado potato beetle in entomological warfare, there is no evidence that the beetle was ever used to attack the food supplies of enemy nations. In less than a century, this pest had established itself around the globe, but it did so without the aid of warring armies.

Poster from the former German Democratic Republic (East Germany). The text reads: “Ami-beetles are to destroy our harvest. With that they are also endangering the basis of your life. To destroy the potato beetles is a battle against the imperialists. The fight against the disastrous pest from the USA is a battle for peace!” Image courtesy of Andrei Alyokhin, potatobeetle.org.