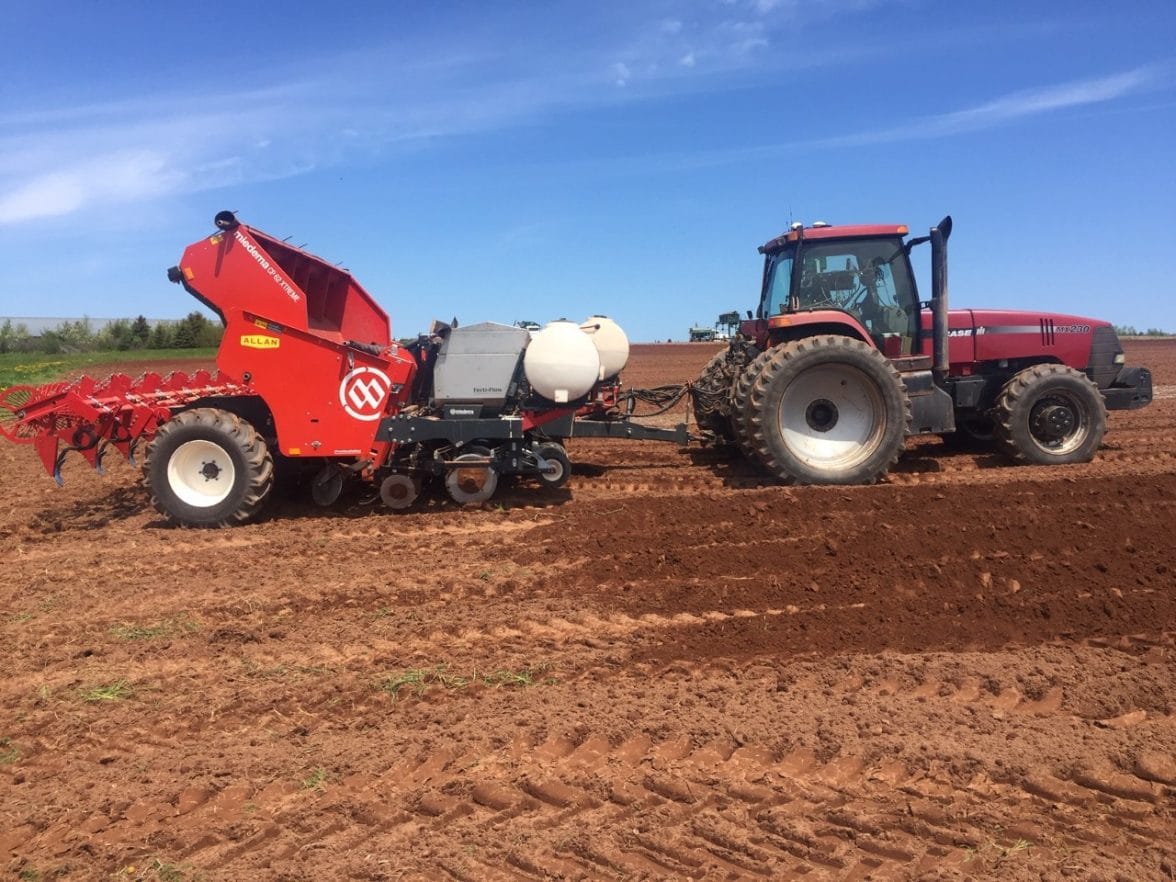 Even with unseasonably cold, wet conditions this spring and a slow start to the season, growers are feeling optimistic about 2019.

Despite a late start to the planting season in most potato producing areas in Canada, growers are generally optimistic about the prospects for this year’s crop.

However things turns out, it will most likely be an improvement on what, for many Canadian producers, was a dreadful end to the 2018 harvest season, when unseasonably cold, wet weather led to thousands of acres of potatoes being left in the ground.

According to Kevin MacIsaac, general manager of the United Potato Growers of Canada, producers in New Brunwick, Prince Edward Island, Quebec and Manitoba have all applied for government assistance under the AgriRecovery program as a result of last year’s discouraging harvest.

MacIsaac, along with provincial grower representatives across Canada, spoke to Spud Smartin late June about how the 2019 crop was shaping up.

MacIsaac says when planting started, the weather was generally cold and wet in most potato areas in Eastern Canada, while in most of the western provinces it was cold and dry.

The result, he said, was planting delays for the majority of producers —but MacIsaac did refer to one silver lining.

“Because the soil was cooler than normal in most planting areas, we had very little seed piece decay,” he said. “Normally, we have some wet rot that ends up being in fields that you have to replant. We see very little of that this year in almost all of the provinces.”

A cold, soggy start to the season in New Brunswick meant planting there was a little later than usual, although Matt Hemphill, executive director of Potatoes New Brunswick, maintains it may take time to consider a “new normal” when it comes to getting potatoes in the ground.

“If you look at the last three or four years, we’ve planted the crop up until the first week of June,” he added. “It’s just the way it is now. Our summers have been moved forward a month.” 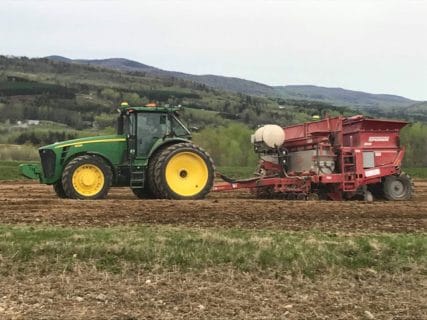 Potato planting in New Brunswick started in mid-May and wrapped up by June 7. Hemphill said seed quality was very good and there were great growing conditions throughout the province in June.

“It’s been ideal so far,” he said, adding that unpredictable weather events like summer hail and excessive rain are always a concern for Maritime potato growers.

“When the hurricanes start coming up the Eastern Seaboard, then we always question how much precipitation that’s going to bring. We don’t need these four- to six-inch torrential downpours. That’s where the problems occur,” Hemphill explained.

“Those are always unknowns at this point, but I’m feeling pretty optimistic about the crop so far.”

Hemphill said the total potato acreage in the province, which was 54,000 acres in 2018, is expected to climb 1,500 to 2,000 acres this year as a result of strong demand for New Brunswick’s processing potatoes, both at home and from surrounding provinces.

In Prince Edward Island, potato planting was delayed due to cold and wet soil conditions in April and May, and it didn’t wrap up until the second week of June.

“We’re probably a week behind where we’d like to be, but this time of the year, there is loads of time to make it up,” said Greg Donald, general manager of the P.E.I. Potato Board.

He added growers benefitted from warmer weather that started during the last two weeks of planting. That, combined with timely rain in June, resulted in a good start to the growing season on the Island.

“We just need some heat now and sun, and we’ll be off to the races,” Donald said.

“We just need some heat now and sun, and we’ll be off to the races.” Greg Donald.
Click To Tweet

P.E.I.’s potato acreage has hovered around 85,000 acres the past 10 years, and Donald says he doesn’t expect to see much change from last year’s total of 86,000 acres.

It was a cold and wet spring as well in Québec, where planting was delayed seven to 10 days in most areas.

MacIsaac said that some Québec growers needed to replant their fields due to seed piece decay in wetter soils.

According to MacIsaac, the potato acreage in Québec, which totalled 42,700 acres in 2018, will likely see an increase of 1,000 acres for processing potatoes and another 1,000 acres for fresh.

Kevin Brubacher, general manager of the Ontario Potato Board, said potatoes started going into the ground in early March, but growers were slowed down considerably by the cold and wet conditions.

Brubacher said while potato planting ended very late in Ontario compared to most years, growers were encouraged by warmer and dryer weather in June.

“We’re going to have a few acres that were drowned out or suffered some rot in the field, but for the most part, everything has turned around and looks pretty good,” he said.

It’s expected 34,000 acres of potatoes would be planted in Ontario this year, around the same total acreage as in 2018, Brubacher added.

In Manitoba, it was a dry spring but somewhat colder than normal. Dan Sawatzky, manager of Keystone Potato Producers Association, said planting started slightly later than the previous year, but by mid-May, most of the potatoes were in the ground. The cold ground conditions, however, did have an impact on emergence.

“Some of the early potatoes were in the ground longer than you would have liked, up to four weeks and possibly even five weeks before they emerged,” Sawatzky said. “The potatoes planted later emerged more quickly than the early ones, so the emergence window was confined to about two weeks or so.”

Sawatzky said as a result of the dry soil conditions, almost no seed rot had been reported.

“I think we’ve had a fairly decent start. The stand seems good,” he said.

Most producers in Manitoba irrigate their potato fields. Sawatzky said while it continued to be quite dry in Manitoba into June, irrigation reservoirs in the province were refilled during the spring thaw for the most part.

Manitoba’s total potato acreage, which was just over 64,000 acres in 2018, is expected to increase substantially this year.

According to Sawatzky, the province’s processing acres are expected to increase by approximately 5,500 acres in order to feed the newly expanded Simplot plant in Portage la Prairie, Man., that opens in January 2020.

MacIsaac said an additional 400 acres of fresh potatoes are also expected to be grown in Manitoba in 2019.

MacIsaac said he didn’t expect there to be much change in Saskatchewan’s potato acreage, which was 6,300 acres last year.

He described the province as “unbelievably dry,” and said by mid-June, most potato growers were still waiting for their first rainfall. MacIsaac added the lack of moisture was already having an adverse effect on canola and other field crops being grown in Saskatchewan.

“Some very cool, wet weather delayed the beginning of our planting season, but when conditions improved, most growers were able to plant their acres within three to four weeks under near-perfect conditions,” says Matthew Lawless, president of the Saskatchewan Seed Potato Growers’ Association.

“Some very cool, wet weather delayed the beginning of our planting season, but when conditions improved, most growers were able to plant their acres within three to four weeks under near-perfect conditions.” Matthew…
Click To Tweet

Most Saskatchewan growers rely heavily on irrigation as their main source of water, and with the significant drought in the province, potato crops have been heavily irrigated since the middle of May.

“Some timely rainfall has occurred recently, and favourable weather has kept pest pressure down. Table and seed crops are progressing nicely and growers are optimistic about the crop’s potential this year,” says Lawless.

In Alberta, the weather was very cold and dry at the start of planting, resulting in delays up to 10 days for some farmers, according toPotato Growers of Alberta executive director,

Terence Hochstein. He said as of the end of June, the crop looked to be in good shape.

Hochstein said as a result of four years of marginal snowfall and spring runoff, combined with very little in-season rain, the irrigation reservoirs in southern Alberta are starting to be taxed at an alarming rate.

He added some irrigation districts in the South Saskatchewan River basin have put their members on allocation, meaning growers in these areas may need to pull water off crops like cereals in order to provide adequate irrigation for their potatoes and other high-value crops. 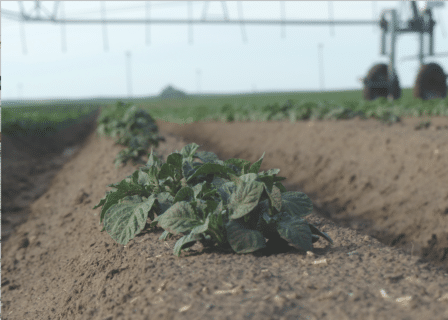 Last year, the potato acreage in the province was 55,300 acres, but with the opening of the new Cavendish Farms plant in Lethbridge, Alta., in August, there will be a major boost in the number of processing potatoes grown in Alberta this year.

Hochstein said this year’s total should be around 61,000 acres, which includes an additional 4,500 or so acres of processing potatoes needed to feed the Cavendish plant. He added Alberta producers are expected to grow around 1,200 more acres of seed potatoes in 2019, and fresh production will likely decline a bit as more potato acres are shifted over to processing.

Unlike the situation in some other parts of the country, B.C. potato producers generally enjoyed great weather throughout the spring.

Most potatoes were in the ground by May 20, and Andre Solymosi, general manager of the B.C. Vegetable Marketing Commission, said planting generally went off without a hitch.

“It’s gone well,” he said. “We’ve had a good stretch of weather and it’s continuing.”

Solymosi said June was a little dryer than normal, but that wasn’t a major concern for producers with potatoes on irrigated acres.

The potato acreage in British Columbia is expected to be close to last year’s total of 6,600 acres.