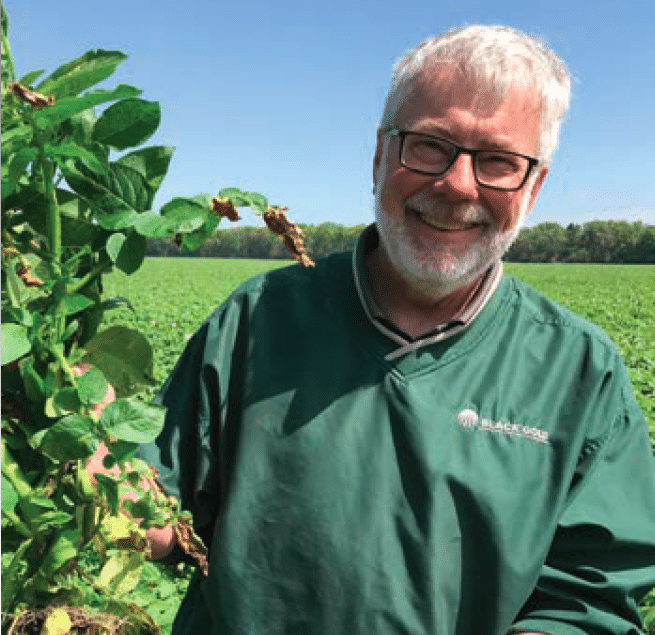 [deck]John Nordgaard will be presented with PAA’s highest award — Honorary Life Membership — at the 103rd annual meeting this summer.[/deck]

Since John Nordgaard has been with Black Gold Farms, the company’s size has quadrupled. Employees have increased from around 30 in 1997 to 185 full-time staff today. As director of operations then, and executive vice-president of operations now, Nordgaard has participated in much of that growth. Although, he’d be the last person to say so.

At Black Gold Farms, Nordgaard oversees operations for all farms across multiple states, he has also managed all personnel and has directed agronomic planning and practices, including irrigation and general production management, for both potatoes and sweet potatoes.

Over the past 22 years, he’s shown exceptional ability managing research projects and facing down many newly-emerging disease threats and overcoming irrigation and weed challenges, furthering Black Gold Farms’ goals and contributing to the body of scientific knowledge on issues affecting potato production.

“We faced some very serious disease issues with zebra chip disease, Dickeya bacterial issues, late blight, and a whole host of pathogens, weeds, and irrigation issues, and for the most part, we’ve been able to learn how to manage it. We’ve never conquered it all, but we’ve learned how to manage and work with it,” says Nordgaard.

“And since these were new and developing issues within the United States, I felt like we’ve got some real success stories in our abilities and in what we have contributed back to the academic branch, which is the PAA.”

This summer in Winnipeg, Man., at the 103rd Potato Association of America annual meeting, Nordgaard is to be recognized by the organization with an Honorary Life Membership award for his contributions to potato science research. At Black Gold Farms, Nordgaard has been involved with research projects and committees, test plots and sampling, and research collaborations with other PAA members.

“We’ve shared results and pushed the academic field, and those who hold the purse strings to fund projects, so that we could learn and move forward,” he says.

“We’ve shared results and pushed the academic field, and those who hold the purse strings to fund projects, so that we could learn and move forward.” John Nordgaard
Click To Tweet

The plant pathologist has been attending PAA meetings for around 25 years, and the people he has met have become more than just colleagues.

“It’s a group of people very dedicated to the science branch of the industry and a tremendous group of friends. They have become my references and my sources of information as we’ve travelled back and forth across the country and experienced different problems, challenges and opportunities,” says Nordgaard.

“My job at Black Gold Farms is to take strong research and analyze that work done by other people and put it to work on our farm. That is an area where PAA has been exceptionally helpful to me and to Black Gold Farms. That information and those friendships I mentioned are worth their weight in gold.”

“My job at Black Gold Farms is to take strong research and analyze that work done by other people and put it to work on our farm. That is an area where PAA has been exceptionally helpful to me and to Black Gold…
Click To Tweet

Nordgaard was at a very young age when he began business operations and personnel management. It was a steep learning curve, he says, but he credits the golden rule as one of the keys to managing people.

“It is very important you treat everyone with respect. Also, always make your expectations clear and challenging so people are always striving to improve and be better at what they do.”

“It is very important you treat everyone with respect. Also, always make your expectations clear and challenging so people are always striving to improve and be better at what they do.” John Nordgaard
Click To Tweet

For the first 21 years of his career, Nordgaard worked for, what was then, a small start-up company called Agvise Laboratories Inc., where he managed the field research program. It was one of the first contract private research facilities in the northern United States. He also managed the company’s Good Laboratories Practices Program and marketing for the laboratories across the United States, all while performing potato research and consulting.

These days, while wearing his pathologist hat, Nordgaard is working on the Dickeya bacteria complex and he’s also “putting considerable efforts in the field of powdery scab,” he says. He’s also focusing on the business’ seed side by concentrating on growing smaller seed for single drop use and looking at ways to improve seed cutting and physiologic age.

“We’re diversifying our seed production in a number of ways,” he says. He’s also going to delve into the area of soil fertility a bit harder, he adds.

Sometimes, Nordgaard has time to dream about retiring — and gardening, fishing, woodworking, and hunting, perhaps, even, spending some time at the cabin on the lake — but do potato researchers really ever retire?

“I’ll be involved in some form or fashion. I’m on four different Specialty Crop Research Initiative committees, I’m on the advisory board for our Northern Plains Potato Growers Association and I’ll continue to do some research projects that support the industry,” he says.

“PAA is a tremendous organization and I look forward to many more years working with them.”

Alberta Potato Conference Cancelled for Second Year in a Row