Working Together on Research

After more than a decade spent developing a research network, the Canadian potato industry is now taking full advantage of funding from the Canadian Agricultural Partnership.

When Canada first launched Growing Forward [now called the Canadian Agricultural Partnership (CAP) more than a decade ago, the potato industry was interested but knew they had some work to do before they could take full advantage of the program.

“There was a real need for us to be able to work together to really try and leverage the joint efforts of researchers, industry resources and available funding,” Tracy Shinners-Carnelley, chair of the Canadian Potato Council Research Working Group, says in a Zoom interview. “Prior to that time, we weren’t really working in a structured way to do research on areas that were a common priority to many provinces.”

“When we put together what our proposed research is going to be, it’s all the national organizations, it’s the grower organizations, it’s processors, it’s all our industry, it’s universities,” David Jones, manager of the Canadian Potato Council (CPC), explains in a Zoom interview. “To come up with our funds, it’s all a voluntary basis.”

While the CPC was developing the research working group, the group was taking part in the CAP cluster projects with the CHC. During the first cluster CPC realized they needed to better set their research priorities before the second cluster launched, they were able to finalize their research strategy which set them up for cluster two and allowed them to flourish during the third cluster. 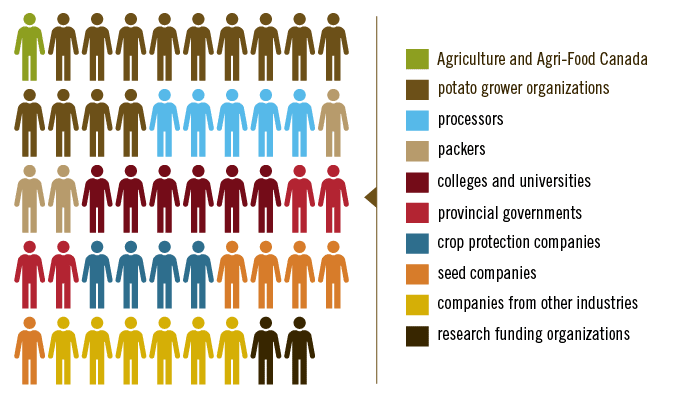 The Canadian Potato Council works with a number of partners for funding on these projects. Graphic: Lesley Nakonechny

The third cluster officially started on April 1, 2018 with the potato industry having seven research projects under the horticulture cluster as part of it, with an eighth project was announced in March at the CHC annual general meeting. The cluster lasts until March 31, 2023.

“We’re just about to start the third field season of this current cluster. So, there’s lots of activities happening in different parts of the country on all of these projects,” Shinners-Carnelley says.

One of the projects focuses on the development of regional management strategies and decision-making tools for control of Colorado potato beetles (CPB). Chandra Moffat with Agriculture and Agri-Food Canada (AAFC) is leading the research which is aiming to reduce economic losses for potatoes due to CPBs.

Claudia Goyer from AAFC is researching how to increase profitability for Canadian potato producers by controlling common scab. Her group is evaluating several methods to control common scab under a range of environmental conditions and soil types across Canada.

There is also a project led by Rick Peters with AAFC tracking late blight pathogen strains and their characteristics. His team aims to determine various biological characteristics of isolated strains including fungicide sensitivity, with the overall goal of improving disease management and economic returns.

Smart agriculture is also being studied by Athyna Cambouris from AAFC. Her research is focusing on developing and evaluating smart farming practices suitable for application in several major Canadian potato production areas.

Xianzhou Nie with AAFC is leading a project investigating the occurrence and distribution of potato tuber necrosis-inducing viruses in Canada. His group will also study varietal responses to the viruses in order to minimize economic losses.

Christine Noronha from AAFC is working on generating and evaluating integrated pest management tools for wireworm control. Her group plans to test the effectiveness of new insecticides for control of wireworms and click beetles; evaluate an integrated approach for management of wireworm damage; find and use click beetle monitoring tools; and monitor click beetle expansion in Canadian potato growing regions.

Many industry partners are working with AAFC to assess the performance of advanced breeding selections and recently released varieties. The group is comparing recently released AAFC varieties and newer varieties from other breeders to standard potato varieties grown in each region of Canada to judge their potential as viable varieties.

The last project focuses on potato early dying (PED) disease management and is being co-led by Mario Tenuta with the University of Manitoba and Dahu Chen from AAFC. Potato fields will be surveyed to determine PED levels and evaluate how PED is controlled through growers’ cropping systems, best management practices and control products.

The CPC Research Working Group isn’t just focused on actually doing the research but also how they can share it with the Canadian potato industry. As part of their research strategy they have developed a knowledge transfer plan.

“The projects were really chosen to a large extent in that the research could be deliverable within a short period of time,” Jones says. The knowledge transfer plan is “basically communicating back to them what has come out of their efforts to fund this research.”

Some of this information will be provided to growers through traditional extension work of writing reports and attending grower meetings across the country. The CPC will also use its social media channels to share facts about the research projects and are working on developing a website to showcase information.

“We really wanted to make sure that we were trying to cover all of the different ways that people are getting their information these days,” Shinners-Carnelley explains. “It was really important to us to try and partner with Spud Smart because we know that Spud Smart has great distribution throughout Canada.”