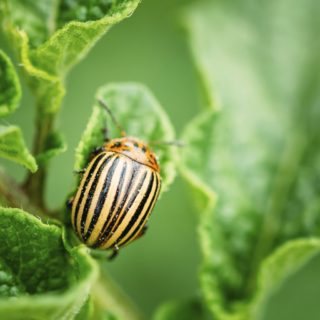 As growers head into another production season, some are concerned about Colorado potato beetle populations and rising neonic insecticide resistance.

Ian MacRae, a professor and extension entomologist at the University of Minnesota, offered some practical insecticide resistance management steps at Manitoba Potato Production Days in January in Brandon. MacRae kicked off the conference presentations with a talk about Colorado potato beetle management in a post-neonic world.

If producers don’t lose neonic products to registered use cancellations, they’ll lose them to resistance, which is already occurring in Colorado potato beetle. “You’re going to have to think differently about your beetle management and a lot of that is due to resistance.”

The increase in resistance coincides with synthetic insecticide development. Less reliance on traditional and cultural control methods and more on chemistries to manage insects started in the ’50s and ’60s. Chemical control methods were rapidly adopted as they were “very effective, very efficient, very cost-effective, and they took less time,” said MacRae.

Neonics were introduced in the early ’90s and resistance documented as early as 1997.

Two forms of resistance are at play, MacRae said. One selects against susceptible beetles (they are killed by the insecticide), which, over many generations, results in a population resistant to the insecticide used.

The other form is behavioural. “What we’ve seen in a number of locations, and it sounds like it’s happening here, is the extended emergence of adults.” That means eggs and larvae can be found in fields well into the month of July, which presents different management issues.

This form of resistance selects against individuals who emerge early (they are killed by the insecticide seed treatment). Late-emerging beetles are what’s left of the population, which MacRae calls teenage beetles as “they’re the ones that like to sleep in.”

“Now you’ve got a foliar battle later in the season,” MacRae said. “If you were [a producer] back in the ’80s, this is what it was like before seed treatments. What’s old is new again,” he said.

“You’re going to have to think differently about your beetle management and a lot of that is due to resistance.” Ian MacRae
Click To Tweet

Of big concern is any insecticide modes of action that currently control beetle populations could be lost if they’re not managed properly. To keep these tools in farmers’ toolboxes, steps must be taken now to manage resistance, MacRae maintains.

Producers can take practical actions against resistance development; however, they may have to harken back to the old days. Producers must start thinking about older methods as alternative approaches to keep beetle populations in check, said MacRae.

For example, because neonic efficacy is decreasing across entire areas, producers may be more dependent on foliar insecticides. However, foliar efficacies may vary from area to area. MacRae recommends using a method developed years ago to determine Colorado potato beetle insecticide resistance: on-farm dip tests.

Increased scouting for beetle populations to determine life stages present in the field will help producers make better choices, including those involving insecticide application. Also, producers should be spraying insecticides for larvae control earlier rather than later, as larvae are much easier to kill than adults.

One essential way to decrease the risk of insecticide resistance development is to always follow up any insecticide application, including a seed treatment, with a different mode of action. Rotate chemistries every time, said MacRae.

In addition, apply insecticide after overwintering beetle populations have reproduced to maintain the susceptible genotype in the population for as long as possible.

MacRae’s take-home message is simple. “This game is all about keeping products in the toolbox because we may not have a whole lot of new modes of action or products coming out. It’s important to keep what we have.”

An information sheet on the Colorado potato beetle dip test can be found at www.omafra.gov.on.ca/english/crops/facts/pbeetletst.htm

I’m back sitting at my desk in my home office after a wild week of work. My colleagues at Spud Smart and myself hosted...
Read more
Industry

The government of Ontario is giving up to $118,500 to develop specialized COVID-19 resources to help better protect the health and safety of temporary...
Read more
From our Desk

When I first started this job a year ago, I was so excited to go to every potato industry conference and meet all of...
Read more