[deck]Are you up to speed on the latest information about vine killing? Here’s what the experts had to say.[/deck]

As any potato grower will attest to, a successful growing season often comes down to what transpires below the soil’s surface. A field full of healthy, robust tubers usually translates into a positive bottom line.

As significant as the happenings below ground may be to growers’ fortunes, events above the surface can have an equally big impact on just how fruitful their season may be. Perhaps there is no better example of that than vine killing, a harvest aid procedure used to reduce the amount of potato vines, limit late blight tuber infections, control tuber size, reduce skinning and minimize the spread of infection by aphids on seed potato crops. 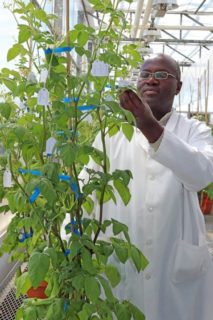 Benoit Bizimungu, a research scientist with Agriculture and Agri-Food Canada (AAFC) in Fredericton and curator of the Canadian Potato Gene Resources, says vine killing, or top killing as it is often referred to, has been a standard pre-harvest practice in Canada for quite some time.

Just like any tool, Bizimungu says vine killing can be highly effective if used properly. There are essentially two methods of vine killing: mechanical (flailing, cutting or burning the stalk) or chemical (desiccation). In many cases, the two approaches are used in combination to help facilitate mechanical harvesting. However, top killing needs to be properly managed as it can cause stem-end discolouration and adversely affect the colour of some products such as French fries and potato chips.

One of the primary reasons for using vine killing, according to Bizimungu, is that it can go a long way in helping to improve the skin set of most varieties of potatoes. That, in turn, usually means reduced skinning and bruising during harvesting.

“Top killing prior to harvest actually makes the skin better or tougher. That way you can have better quality in terms of less skinning and less bruising,” he says. “You can also prevent other problems by having tougher skin and you can improve storage [capability] during the storage season.”

In addition, he says, it allows control over the size of the tubers and can effectively determine the timing of a harvest. Once the stalk has been flailed or chopped and a desiccant applied, it can no longer supply nutrients to the tuber which substantially slows or halts any further growth.

Mark Butcher, an agronomist and crop consultant with Phoenix Agricultural Services in Argyle Shore, P.E.I., says vine killing is also an effective means of helping protect potatoes from some common viruses. For example, the green peach aphid is a highly effective vector of viruses into potato plants. By eliminating most of the green, leafy stalk, no virus transfer can occur, Butcher says.

Although vine killing is used by potato growers from coast to coast here in Canada, it is a little less commonly practiced in the West. That’s due, in part, to the fact that a larger percentage of the potatoes grown in Western Canada are destined for processing and in some cases are harvested green to maximize yields. Another factor, Butcher says, is that farmers in provinces such as Manitoba and Alberta usually receive far less rainfall than their eastern counterparts and in most years they don’t face major fungal concerns such as late blight.

When the Time is Right

Timing is another important consideration when it comes to effective vine killing. It’s recommended that most vine desiccants be applied at least 14 days prior to harvest. Experts also suggest that they be applied, whenever possible, when a plant is starting to show signs of senescence or natural maturing.

“Senescence is a good sign that you’re entering into that time when it’s okay to apply products to kill the crop down,” Butcher says. “If plants are still actively growing and nowhere near senescence, it’s much harder to kill them down using just a desiccant, often requiring multiple applications. Also, desiccants should not be applied if possible to a drought-stressed potato crop. Under these circumstances you can actually harm the quality of those potatoes.

“If people have it in mind that they’re going to want to harvest early they may have to make other adjustments in the fertility levels of those crops or when they plant those crops to ensure they’ve got the beginning of senescence. You can’t just do [vine killing] any time and expect to get a good result.”

While mechanical top killing and the tools used to do it haven’t changed much over the years, chemical desiccants and the methods used to apply them have evolved over time. Diquat, a non-selective type of herbicide with brand names such as Reglone, Dessicash, Diquash and Armory, is the desiccant of choice for many potato farmers. Other popular herbicides include carfentrazone-ethyl and endothall.

Butcher says the biggest change that has occurred regarding desiccation during the past several years is how chemicals are applied to potato plants. At one time, he says, growers used a higher application rate and attempted to kill the stem with a single pass. Today, they are far more likely to use an initial application of one-third or two-thirds of a full dose and follow that up with a second pass of the remaining amount of chemical four to six days later.

The biggest change that has occurred regarding desiccation during the past several years is how chemicals are applied to potato plants.
Click To Tweet

“You actually want the plant to die relatively slowly. You don’t want it to die too fast because you can have quality issues then. You can get excessive levels of diquat going into the tuber if you’re not careful, particularly under very dry conditions,” he says.

“Typically, how it’s evolved is they’ll go in with a slow [initial] rate … just to start the plant down and then a week later they’ll come in with the rest of it to finish it off. One of the benefits is that if you kill the plant down more slowly, more of the sugars are converted to starch and in the French fry business that means you get better colours.”

Horticultural crops agronomist Jazeem Wahab, who works out of AAFC’s Saskatoon Research and Development Centre, says some of the newer chemical desiccants being used today work differently than those previously used by potato growers. Many of the newer chemicals are biomechanical inhibitors that go into the plant and essentially kill it from the inside rather than simply burning the outside the way some chemicals used to.

Some of the newer chemical desiccants being used today work differently than those previously used by potato growers.
Click To Tweet

Regardless of the type of desiccant being used, it’s important for growers to pay attention to temperature and environmental conditions prior to applying it. Some desiccants are rainfast, but others can run off in rainy weather and lose much of their effectiveness. Conversely, some desiccants can be less successful if the conditions are too hot. They can also lead to stem-end discolouration if applied incorrectly or at the wrong time.

Wahab says growers should read the labels on any products prior to using them in order to make informed decisions about application rates and timing. He also suggests that growers use top killing as part of an overall management plan rather than in isolation.

“When you look at vine killing it is more than just vine killing. It’s also harvest management that goes right from the time to plant to how you manage the crop and how you get your crop out.”