The Advantages and Challenges to Planting Whole Seed

Some of the most important trials Shaun Pelkey, agronomy manager at McCain Foods’ Valley Farms in Grand Falls, N.B., has been conducting over the past few years focus on planting whole seed as a way to increase payable yields and maximize grower returns.

“McCain is trying to lead the way on this,” he says. “We have a big drive to increase yields in this part of the world and to be more competitive. Whole seed is going to be one of the ways to get there.”

The whole seed model has been used in Europe for some time and is becoming more popular in the United States. The practice has had low adoption in Canada; however, that may change.

“It’s starting to gain traction, and I think McCain sees the benefit of [the whole seed model]. It’s just a matter of how to get there and proving the benefits to growers,” says Pelkey.

This spring marks the third year whole seed acres will be increased at Valley Farms. Pelkey has also noticed other Canadian commercial operations assessing or implementing the use of whole seed.

“I think [whole seed model adoption] will increase. I’m not sure how quickly or widespread it will be, but if we can prove that there’s a benefit to it and a yield increase moving to a whole, or minimally cut, seed system, it’s something McCain will want to promote,” he says.

“We think we can increase our yields by at least five to 10 per cent. In the end, that’s what it’s all about. Growers want to see a return if they move to whole seed.”

According to Nick David — who has had a lot of experience with whole seed as R.D. Offutt (RDO) Farms’ Midwest regional agronomist in the United States — one of the biggest misconceptions about planting whole seed is the method is good for research purposes, but too difficult for growers of any scale to carry out.

David says there are important advantages for growers to planting whole seed.

Increased emergence synchronicity was another big benefit for RDO when it shifted from cut seed to planting more whole seed, says David. When whole seed is used, the interval between the emergence of the first plant and the last one is much shorter when compared with the emergence of cut seed pieces. “More synchronous emergence results in a more uniform crop, which is what we’re after,” he says.

“We can deliver seed directly from our seed storages to the planter, eliminating many handling operations, which reduces seed damage,” he says. Labour costs associated with seed cutting operations were also eliminated. Additionally, planter precision was improved when planting whole seed.

“We’ve been able to increase the precision and accuracy of our planters with whole seed.

Shawn Brenn — a fourth generation producer who owns and operates Brenn-B Farms with his brother, Chris, — has also experienced these advantages when planting whole seed on his Ontario farm.

He says whole seed is the best option for some varieties he grows. “For our early varieties that we want to push and get into cooler ground, we will generally plant whole seed because if the weather turns sour on us, that whole seed piece has a better chance of surviving the elements.”

“If we can get B-size whole seed Superiors, we’ll put them in the ground early because we know if something goes wrong [such as inclement weather], they will still have enough vigour to sprout and put a plant up even though the seed piece is decaying,” he says.

Seed health is the most obvious advantage to planting whole seed, says Brenn, as there’s no wound and, therefore, less risk of infection. However, there are some seed varieties Brenn and his brother prefer to cut and plant, forgoing the suberization process and in many instances liquid seed treatment.

“We’ll bring the seed in a little bit later and we’ll cut it and make sure it’s going into perfect conditions,” says Brenn. “When you cut and treat seed potatoes, you’re already taking really expensive seed and putting chemical on it, so you’re increasing your costs, and then you’re putting the seed into an environment that’s less than ideal, hoping that it cures properly. To us, that’s just not worth the risk,” he says.

Brenn believes each farm’s situation is unique and planting decisions should be based on what will work best for the operation, including its storage capabilities.

For planting seed, Brenn uses a cup planter for both whole and cut seed pieces. However, when planting whole seed, he says he gets more accurate spacing while travelling at higher ground speeds.

“We use a cup planter and the small-sized seed goes in those cups very uniformly. You can increase your ground speed and still get very efficient plant populations on your seed.”

Also, some varieties exhibit more apical dominance than others. When cutting these varieties horizontally, blank seed pieces may occur. Planting whole seed for these varieties decreases the risk of blanks, he adds.

In addition to increased planter spacing uniformity, says Milt Carter, CEO, president and managing partner of CSS Farms Inc. in the United States, the number of skips and doubles is decreased when planting whole seed.

For his company, not having to deal with the logistics, time and effort involved in seed cutting operations in addition to the associated labour cost savings makes sense.

Although its adoption rate in the United States is relatively low, Carter believes more operations will plant whole seed in the future.

“I’ve been in the business now for 32 years and only a couple of growers I knew were planting whole seed, and they were relatively small growers. Within the last 10 years, there have been two or three major large-scale growers that have converted all or most of their operations to whole seed and are very convinced it pays to do so,” says Carter. “There’s a lot more interest in it recently.”

While there are many benefits to planting whole seed, there are also challenges. One major obstacle can be supply, says Pelkey, where in New Brunswick acquiring whole seed can be difficult. Presently, seed growers aren’t growing whole seed but are sizing out smalls for seed. Last year, Pelkey acquired a load of whole seed from Carter’s company, which has been increased to three loads this year.

Although bringing in whole seed from the United States isn’t feasible long term, it’s important for the trials Pelkey is running. “We’re trying to establish proof of concept. Until we can prove that there is going to be a return for the processing grower and the seed grower, I think it’s going to be a tough sell,” he says.

Seed sizing is another important issue to be addressed. Carter says whole seed should be separated into size categories so small whole seed isn’t planted with large whole seed as correct spacing for larger seed is different from that for smaller seed. Additionally, optimal cup sizes for whole seed can be used when like sizes are grouped together, minimizing the risk of skips and doubles, says Carter.

Currently, Pelkey receives B-sized seed below 48 millimeters. To maximize yields, he says, whole seed sizes should be broken down into 10 mm increments with size profiles ranging from 28 mm to 65 mm, including an oversized category above 65 mm, which could be used as single cut seed.

“Last year, we got our seed spacing where we wanted it, but our stem numbers were lower than anticipated due to whole seed size profile. This meant we increased our tuber size profile, but did not hit our target tuber population, meaning we didn’t maximize both size and yield, and that’s been the biggest challenge so far is maximizing both.”

However, a move to a whole seed system may require sweeping changes. “In the East, it has been a hard sell because it’s not a small change — it’s a full-scale change for the whole industry. It’s a total shift from our current seed production system. Right now, our seed system is based on cut seed, which starts at the greenhouse level right until its third or fourth year field generation,” says Pelkey.

Another factor that could discourage grower uptake is increased seed cost — up to three dollars per hundredweight more in some cases. Additionally, seed growers would have to change some of their management practices to produce whole seed (i.e. tighter spacing or even bed planting to increase stem and tuber numbers).

“There’s going to be a cost involved. If commercial growers are going to pay that extra three dollars, or whatever the cost is, they’re going to want to see benefits, most importantly increased payable yields,” says Pelkey.

Additionally, different equipment and techniques may be required. “You might have to move to bed planters and your harvester would have a smaller pitch to make sure the small potatoes you’re producing aren’t being left in the field at harvest. It’s a big mindset for seed growers to change,” says Pelkey.

Rather than a complete shift to a whole seed model, a split of whole and minimally cut seed is the most likely scenario for Canada.

“I don’t think we’ll ever get to a point where we’re planting or producing all whole seed, but if we can get to the point where it’s, say, 70 per cent whole seed and 30 per cent minimally cut seed, that would be a pretty good goal for the next five to 10 years.”

Brenn will continue to incorporate more whole seed when it’s beneficial for his operation. Field trials help him evaluate if planting whole seed of certain varieties will provide returns. “You need to try them on your own farm in your own soil and situation. I don’t know that we’ll ever be 100 per cent whole seed, but if we can get more varieties of whole seed that’s better for us. We’re using more whole seed, but it depends on the variety as well,” he says.

Like any complex issue, especially where change is involved, it’s a work in progress, says Pelkey.

“We’re continually trying to show the benefits of moving to a minimally cut seed system. We’re learning more each year. In 2019, we’re better off and better prepared than we were in 2017 and 2018,” he says.

“It all comes down to dollars and cents. I think we’re going to get there, it’s just a matter of when and how soon it can be adopted because it’s not a one- or two-year change. It’s a multiple-year change from our current seed system to where we have more whole seed being produced.”

Carter also believes the popularity of whole seed will continue to grow, especially once contracts reward growers for characteristics whole seed can provide.

“In Europe, they think we’re absolutely crazy to be cutting seed in the United States. People in the United States say it’s crazy not to be cutting seed. I think, especially as customers have become more particular in demanding uniformity, and then providing incentives in terms of their contracts for that uniformity, the value of whole seed will be shown to be superior to cut seed, even with the extra cost you’re going to pay for the whole seed up front,” he says. 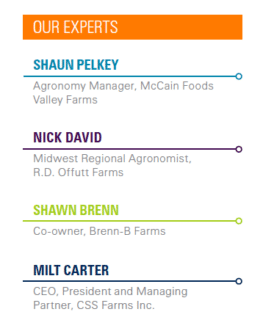 Editor’s Note: For more information and a live Q & A with guest speakers, don’t miss the March 27 live webinar “The Advantages and Challenges of Planting Whole Seed Versus Cut Seed Pieces.” Can’t make the live presentation? A recording of this webinar will be available on Spudsmart.com.

Canadian Potato Acreage to Increase by 2.3 Per Cent: UPGC