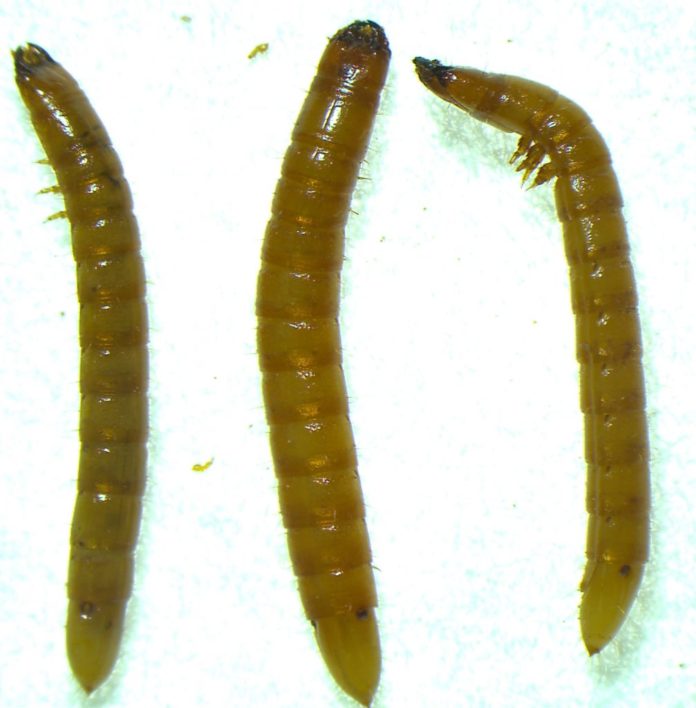 [deck]A research project is underway to determine if RNAi, an emerging technology for pest control, could work for one of the toughest pest problems P.E.I. potato growers are facing.[/deck]

“While research by Agriculture and Agri-Food Canada researchers, such as Dr. Christine Noronha and Dr. Bob Vernon has provided growers with more tools to battle this pest, it is still a serious concern in many parts of the Island,” he says.

At the moment, there is no silver bullet, says Barrett, effective at controlling wireworm. “Instead, we need to take an IPM approach, combining in-furrow insecticides with changes to tillage practices, timing of harvesting, click beetle trapping, and use of beneficial rotation crops like brown mustard and buckwheat.”

RNAi might become a valuable tool in the wireworm control toolbox. “We are excited about the potential that RNAi technology could hold to control wireworm in an environmentally friendly way,” says Barrett.

Many people have recognized RNAi as an environmentally positive approach to controlling insect pests because there isn’t the need to spray chemical insecticides, says Gefu Wang-Pruski, a professor and potato researcher at Dalhousie University, and project leader of a study on wireworm RNAi. “RNAi specifically targets specific species and it doesn’t affect non-target species,” she says.

RNA interference, or RNAi, is a natural gene regulation and defence process. This mechanism is able to switch off a specific gene so the gene doesn’t express its function. In many organisms, RNAi is activated by double-stranded RNA (dsRNA).

Similarly, to control an insect pest, you could introduce into the pest’s body some dsRNA to silence an important gene in the pest. “If we can identify some of the genes responsible for the survival and development of the insect, and if we silence those genes — if we knock them down so they don’t function — then the insect will not develop or survive,” she says.

Using RNAi to control agricultural pests is not new. However, it takes years for the products to be developed and go through the regulatory processes that evaluate their safety for humans and the environment, says Wang-Pruski. For instance, Monsanto has developed a genetically engineered corn trait that produces dsRNA targeting an important gene in the western corn rootworm. If the rootworm feeds on the plant, the gene will be silenced and the rootworm will die. This RNAi trait is expected to be available to corn growers in a few years. As well, Monsanto and Syngenta each have RNAi-based foliar sprays for controlling the Colorado potato beetle in the works.

Wang-Pruski has direct expertise in RNAi for controlling insect pests. “I was involved in an international effort on the diamondback moth, a worldwide pest of Brassica species like cabbage, canola and mustard,” she says. “We were able to use feeding experiments to identify some of the genes key for the development of the moth, and we were able to confirm that we can use RNAi technology to control it.”

Wang-Pruski’s wireworm RNAi project started in 2016. Her research group is currently identifying some of the genes essential to the survival and development of wireworms. Following that, the group will work on developing a delivery method to get dsRNA into the wireworms.

As a first step, the researchers decided on the project’s target species, since RNAi is species-specific and many different wireworm species attack potatoes. AAFC has conducted a multi-year, nationwide survey of wireworm pest species in agricultural areas, and determined Canada has about 20 or more wireworm species of economic importance.

Those species belong to various genera. Some of the species are native to Canada, while others are invasive species from other parts of the world. Three of the most troublesome species — Agriotes sputator, Agriotes lineatus and Agriotes obscurus — are from Europe.

Prince Edward Island has both invasive and native species. “My lab has surveyed the wireworm population in P.E.I., Nova Scotia and New Brunswick using genetic markers; we have developed a system for identifying the species. P.E.I. has mostly Agriotes sputator, so we are focusing on this species,” says Wang-Pruski. She thinks the genes they are identifying may work for some of the other wireworm species, although this theory would have to be tested.

Despite that, her lab is making progress. “We have already identified several of those key genes, and we are doing in vitro testing to see if those genes truly are essential to wireworm development or survival.”

Wang-Pruski says all researchers working on RNAi for insect pest control struggle with developing practical, cost-effective delivery methods. She suspects delivering dsRNA to wireworms could be very challenging.“We can try different delivery methods in the laboratory — feeding tests, soaking tests and many other things — but would those methods be practical in a farm situation?”

Delivering dsRNA through feeding has good potential. Wireworms are the larval stage of click beetles, and feedingis already being used for RNAi control of other types of beetles, either through foliar sprays or genetic engineering of a host plant.

Wang-Pruski’s group will be investigating possible feeding delivery methods. One rotation-based idea is to use a cover crop to deliver the dsRNA to the wireworms. The wireworms would feed on the cover crop’s roots, and that would result in a decreased wireworm population for the following potato crop.

Another aspect Wang-Pruski would like to explore is the possibility of targeting several different wireworm genes at the same time. “Other researchers are thinking about doing this because it would make the control measure more effective. But it is very difficult to do.”

According to Wang-Pruski, the project is making good progress. “We are ahead of schedule; we have made more steps than we originally thought we could. Our major challenge right now is to secure long-term funding.” She is hopeful industry and government will provide additional funding so the research can proceed as planned.

The project’s work so far has been supported by the P.E.I. Potato Board, Cavendish Farms, the P.E.I. Horticultural Association, Genome Atlantic, and Mitacs through the Applied Research and Innovation Program of the P.E.I. Department of Agriculture and Fisheries.

“The research is at early stages, but the board felt that it was important to support this proof-of-concept research to assess whether RNAi could be used to target wireworms and reduce their populations in a very sustainable fashion,” says Barrett.