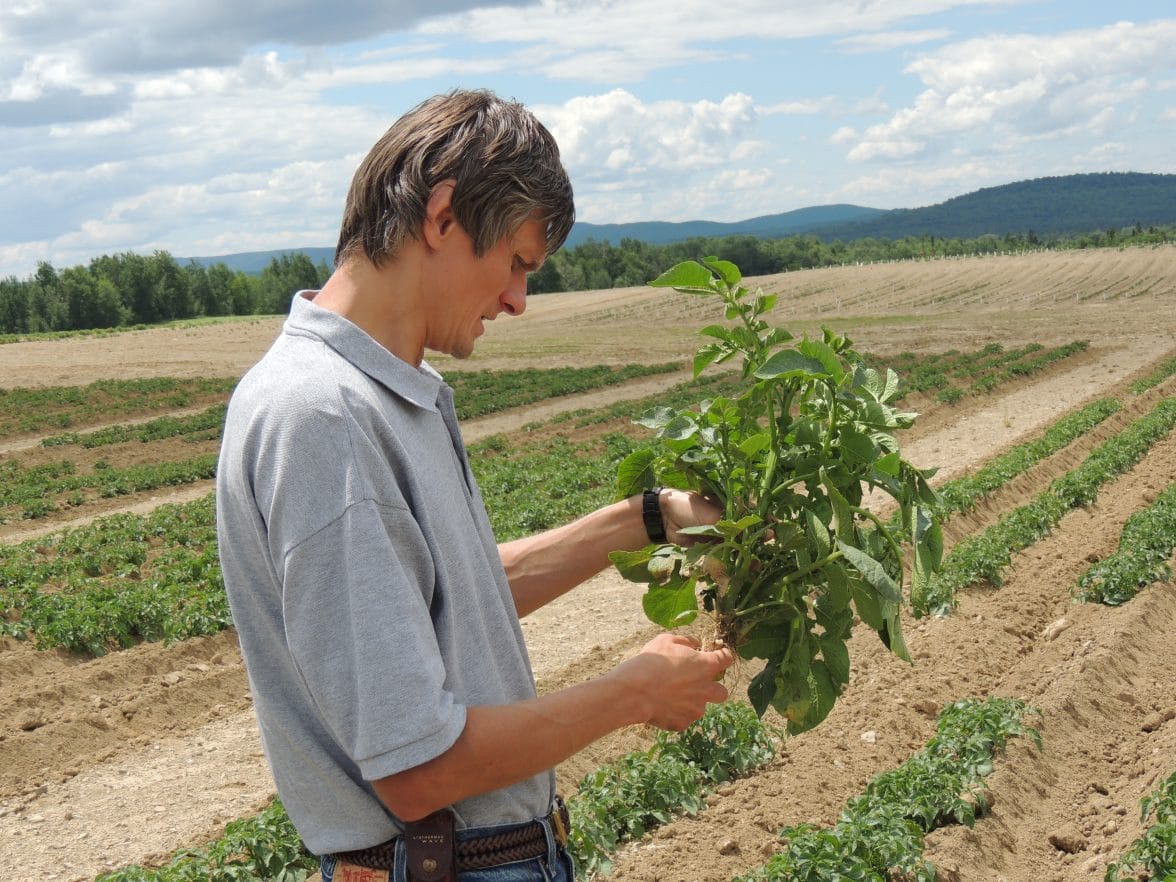 Andrei Alyokhin’s findings on the spread of PVY will help growers to focus their control efforts on practices that actually work. Photo: Aaron Buzza/University of Maine

At the 103rd Potato Association of America (PAA) Annual Meeting, Andrei Alyokhin, a professor of Applied Entomology at the University of Maine, talked about his recent studies on the transmission of potato virus Y (PVY), an aphid-borne virus that impacts potatoes worldwide.

“PVY is an economically important virus that causes significant crop losses,” he says. Depending on the potato cultivar and the strain of the virus, PVY can cause such symptoms as leaf mottling, stunted plants, plant death, tuber necrosis, and reduced tuber production. In some situations, yield losses can reach 80 per cent.

“The process of transmission takes just a few seconds, and insecticides do not kill aphid vectors quickly enough to prevent it from happening,” he says.

PVY inoculum sources can include infected plant materials like infected seed potatoes, cull piles and weed hosts. Alyokhin has made an interesting discovery through his research on the role of weed hosts.

“It is commonly assumed that PVY has a broad host range; thus, infection could easily arrive in a potato field from the nearby non-crop plants. However, our field surveys and greenhouse transmission experiments indicated that the importance of non-crop plants in causing PVY epidemics in potato fields is likely exaggerated.” Good weed control within fields is always important, but this finding has implications for weed management in non-crop areas next to potato fields.

“Weeds in the family Solanaceae [the potato family], such as nightshades, can harbour PVY and should be eliminated. However, there is no need to get paranoid about other weeds in the vicinity of a field, such as dandelions and lamb’s-quarters. Contrary to earlier reports, these are unlikely to be responsible for any significant amount of virus arriving in a field.”

Alyokhinhas also been taking a closer look at the many factors influencing the spread of PVY. “We constructed a computer model simulating PVY spread in a potato field and used it to investigate possible effects of PVY incidence in planted seed, transmission efficiency, vector behavior, vector abundance, and timing of peak vector activity on PVY infection of harvested tubers,” he says.

“Although planting higher-quality seed resulted in fewer infected tubers at the time of harvest, high transmission efficiency still resulted in significant PVY spread even when the initial virus inoculum was low. An early-season peak in the numbers of moving aphids resulted in the highest number of infected plants at the end of the season, while mid- and late-season peaks caused relatively little virus spread.”

The results from this research support the dual strategy of using high-quality certified seedand then spraying horticultural mineral oils on the crop on a regular basis; these oils reduce the transmission efficiency of aphid vectors. The results also highlight the importance of PVY management efforts early in the growing season.

“Growers still often rely on spraying insecticides in an attempt to prevent PVY spread, even though such an approach is not effective. Our findings will help them to focus their control efforts on things that actually work.”