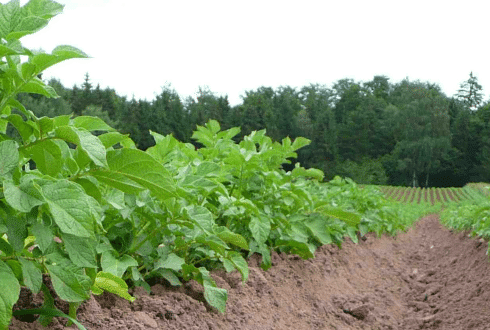 Researchers at Wageningen University & Research are testing the use of drones to measure nitrogen needs in potato crops.

The “Toward precision agriculture 2.0” research program includes a group of potato farmers carrying out test runs with sensor observations by drones. The drone images show exactly where they should apply more or less nitrogen on their fields, allowing farmers to use the product more efficiently.

“Dutch potato farmers apply an average of some 250 kilograms of nitrogen per hectare per year,” says Frits van Evert, expert in precision agriculture at Wageningen University & Research. “It is applied in one session, just before or just after planting. Because weather conditions in the Netherlands vary significantly, more nitrogen may be lost in one year compared to another. In other words, the 250 kilos can be way too much, or much too little; it is rarely exactly the right amount.”

According to Van Evert, it is better to apply two thirds of the recommended amount of nitrogen at the start of cultivation, for example, and “ask” the crop how it’s doing halfway through the season. Advanced sensor observations provide the solution.

“The level at which a plant reflects infrared, red and green light depends on the amount of nitrogen it contains. A plant with too little nitrogen has minor colour variations compared to a plant with sufficient  nitrogen, and modern sensors can measure those differences.”

These measurements can roughly be performed in three ways: with a satellite (a low-cost solution, but unusable when cloudy); with a sensor manually operated in the field or installed on a tractor (a reliable but costly method that hasn’t been widely accepted in practice); or, with multispectral cameras and sensors in drones (this relatively new method is expected to make significant progress in the coming years).

Precision agriculture researcher Johan Booij from Wageningen University & Research explains how it works: “The images captured by the drone of the potato field are converted into a map. The farmer is sent this map by email and can upload it via an app on Akkerweb which we developed with Agrifirm. This software then rolls out advice for farmers as to where they should use more or less nitrogen, and which areas don’t need extra application. While we have optimized the method for the use of the eBee-drone, developers of other drone types can make their sensor systems suitable too.”

Aaldrik Venhuizen, R&D Plant technical manager at the cooperative company Agrifirm, expects a great deal from the sensor observations with drones: “Many farmers now use annual soil and leaf petiole analyses of representative field parts to determine whether extra nitrogen is needed. Now there is a validated method that can not only determine far more precisely how much nitrogen should be applied, but also shows us the differences in nitrogen demand within fields. This will lead to a much more efficient use of nitrogen.” And that will benefit yields, costs and the environment.

According to Venhuizen the focus is currently on ware and starch potatoes, but he believes that expansion of the method for nitrogen measurements in seed potatoes would be a logical next step.

“If it were up to me, we’d also make the method applicable to measurements in other crops, such as malting barley and wheat.”

Potatoes from Maritimes Making Their Way West to Manitoba